Report details rape of children, culture of secrecy that fanned it - Catholic Courier 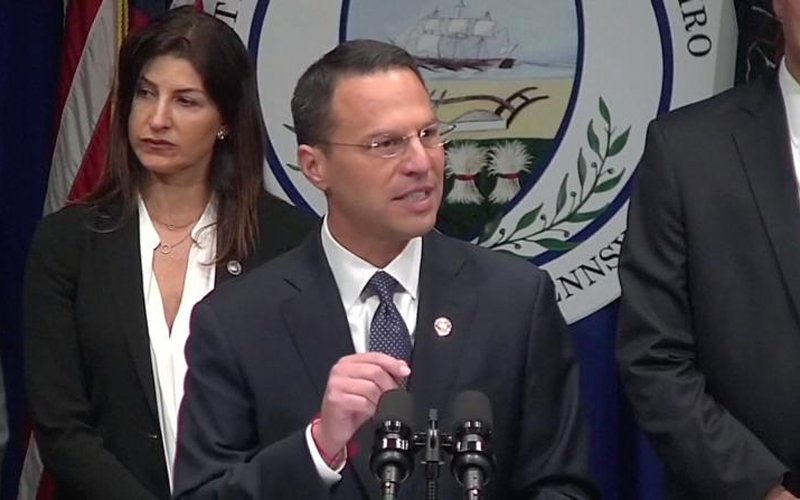 In a screen grab taken from video, Pennsylvania Attorney General Josh Shapiro speaks during an Aug. 14 news conference to release a grand jury on a months-long investigation into abuse claims spanning a 70-year period in the dioceses of Harrisburg, Pittsburgh, Scranton, Allentown, Greensburg and Erie. (CNS photo by Reuters video)

WASHINGTON (CNS) — The report begins dramatically, imploring its readers: “We, the members of this grand jury, need you to hear this.”

Plain and simple, at least 1,000 children identified in the investigation were raped in Catholic places of worship, in schools, and in diocesan owned vehicles, and were “groomed” through diocesan programs and retreats so they could be molested, wrote members of a 23-person grand jury who heard those accounts over a period of almost two years of an investigation of clergy sex abuse said to have taken place in six dioceses in the state of Pennsylvania over 70 years. Their findings were unveiled Aug. 14.

In almost 1,400 pages, they describe graphic accounts of the abuse they say happened in the Catholic dioceses of Pittsburgh, Harrisburg, Allentown, Scranton, Greensburg and Erie.

They detail accounts they heard of boys and girls whose genitals were touched, who were raped or made to perform a variety of sex acts. The report says one priest molested five girls in a family. In some cases the report details, girls became pregnant after being raped. One priest was “rendered irregular” after helping arrange an abortion for a minor he impregnated and mentions a letter that followed from church officials that “seemed to exclusively address the procurement of the abortion with little concern that (the priest) had impregnated a child.”

Some cases were worse than others, the report said, when detailing a case involving a boy who was given holy water by a priest to wash out his mouth after he had the boy perform a sex act. Most of the children were teens and some were preteens, according to the report.

What is depicted comes from internal documents made available by dioceses, from testimony of those who offered it, “and, on over a dozen occasions, the priests themselves appeared before us. Most of them admitted what they had done,” the report says.

When the children or their families reported what happened, “all of them were brushed aside, in every part of the state, by church leaders who preferred to protect the abusers and their institution above all,” the report says.

“The bishops weren’t just aware of what was going on; they were immersed in it. And they went to great lengths to keep it secret. The secrecy helped spread the disease,” the report said.

Most of the crimes are too old to be prosecuted, but “for many of the victims, this report is justice,” said Pennsylvania Attorney General Josh Shapiro in an Aug. 14 news conference unveiling the report, as some of those who had testified for the grand jury attended.

“We’re going to shine a light,” Shapiro added. “We can tell our citizens what happened.”

The report says that it recognizes that “much has changed over the last 15 years.”

Grand jury members said they heard reports from the six dioceses investigated, “so that they could inform us about recent developments in their jurisdictions.”

“In response, five of the bishops submitted statements to us, and the sixth, the bishop of Erie, appeared before us in person. His testimony impressed us as forthright and heartfelt,” they wrote. “It appears that the church is now advising law enforcement of abuse reports more promptly. Internal review processes have been established. Victims are no longer quite so invisible. But the full picture is not yet clear.”

Even though the report is long and its details painful, knowing what happened is “the only way to fix these problems,” they write.

The report recommends that the Pennsylvania Legislature drop the statute of limitations for child sexual abuse. They also ask for a “civil window” law that would let older victims sue the dioceses “for the damage inflicted on their lives when they were kids.” It says better laws for “mandated reporting of abuse” are needed and say confidentiality agreement or non-disclosure agreements should not apply when it comes to criminal investigations.

The grand jury said it keeps in mind that there are likely more than 1,000 victims identified and likely more offending priests it does not know about. It identified 301 priests in the report.

“What we can say, though, is that despite some institutional reform, individual leaders of the church have largely escaped public accountability,” the report says. “Priests were raping little boys and girls, and the men of God who were responsible for them not only did nothing; they hid it all. For decades, monsignors, auxiliary bishops, bishops, archbishops, cardinals have mostly been protected; many, including some named in this report, have been promoted. Until that changes, we think it is too early to close the book on the Catholic Church sex scandal.”

A grand jury does not determine guilt or innocence but whether there may be enough evidence or probable cause to support a criminal charge.