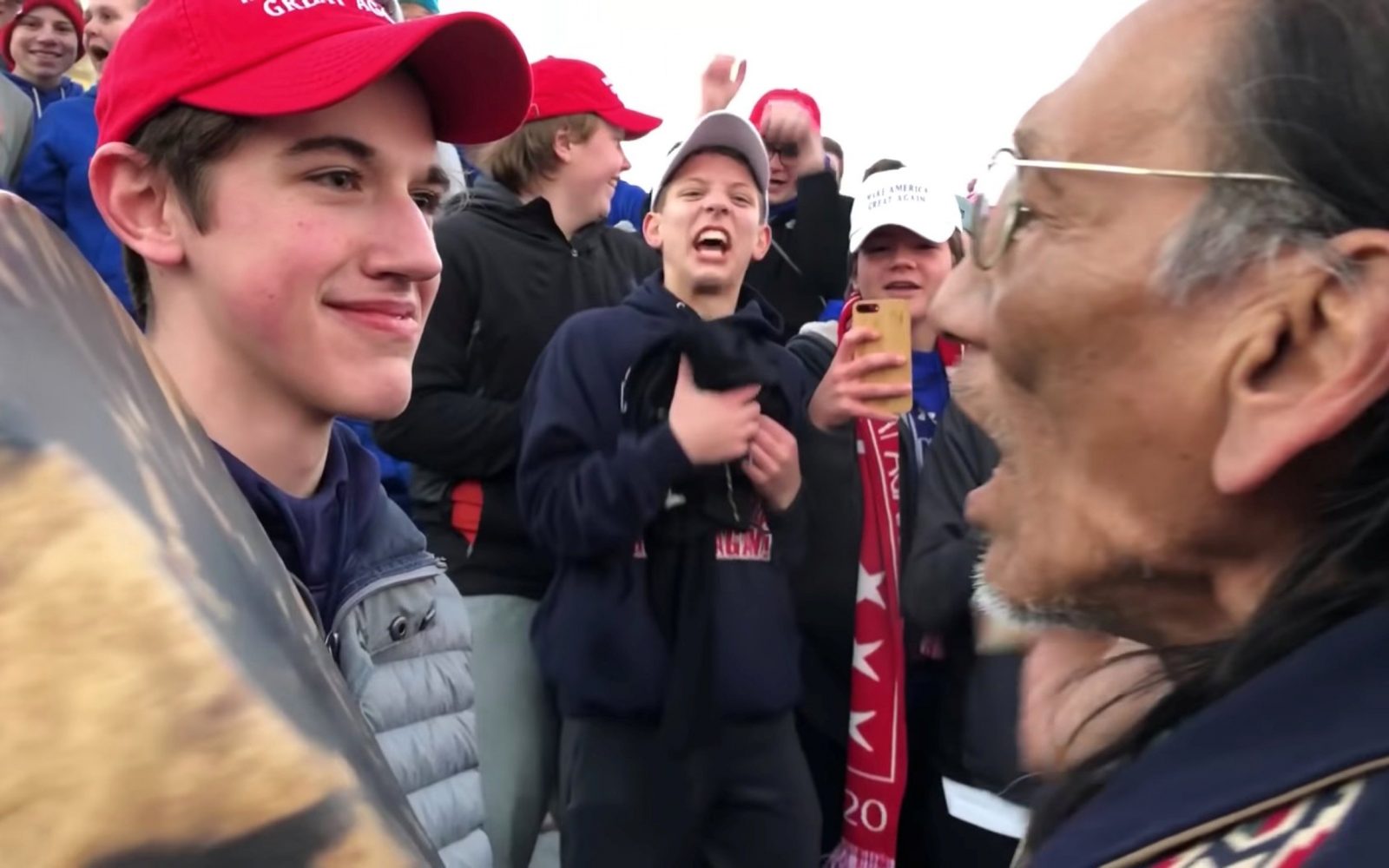 Nick Sandmann, a junior at Covington Catholic High School in Park Hills, Ky., and others students from the school stand in front of Native American Nathan Phillips Jan. 18 near the Lincoln Memorial in Washington in this still image from video. (CNS photo by Kaya Taitano/social media via Reuters)

WASHINGTON (CNS) — An independent investigation into the much-discussed encounter that went viral between Catholic high school students, a Native American tribal leader and members of another protest group on the Lincoln Memorial grounds in Washington in January found no evidence that the students of Kentucky’s Covington Catholic High School issued “offensive or racist statements.”

A report on the investigation was released by the Covington Diocese Feb. 13.

Two days before releasing the report’s findings, Covington Bishop Roger J. Foys wrote to parents of the high school students telling them he was pleased to let them know that his hope that an inquiry into the events of Jan. 18 would “exonerate our students so that they can move forward with their lives has been realized.”

The investigation, conducted by Greater Cincinnati Investigation Inc., which has no connection with the high school or diocese, “demonstrated that our students did not instigate the incident that occurred at the Lincoln Memorial,” the bishop said.

The four-page report signed Feb. 11 said that four investigators spent 240 hours looking into the events of Jan. 18 when the Covington Catholic High School students — in Washington for the annual March for Life — met up with other groups while waiting for their buses to pick them up. The investigators spoke with 43 students, 13 chaperones and a number of third-party witnesses. They also reviewed about 50 hours of internet footage or comments focused on the groups’ exchange.

Investigators were unable to question Nathan Phillips, tribal elder for the Omaha Tribe, who was chanting and beating a drum by the students, or Nick Sandmann, the student most prominent in viral footage of the encounter.

The incident in question gained national attention from a viral video of it that showed students surrounding Phillips, who was chanting and beating a drum. The students appeared to be mocking him and Sandmann, inches away from the drummer, who never moved and was smiling, was accused of flagrant disrespect.

The clip caused immediate outrage, particularly on social media. But by the next day, extended footage of how the situation unfolded revealed that another group had taunted the students. Phillips had walked over to the group as a type of intervention.

Just days after the video prompted rounds of criticism, Sandmann issued a statement saying he had “received physical and death threats via social media, as well as hateful insults.”

In a Jan. 22 statement, the Covington Diocese said the incident and the reaction to it was “a very serious matter that has already permanently altered the lives of many people. It is important for us to gather the facts that will allow us to determine what corrective actions, if any, are appropriate.”

The investigators’ report said it found no evidence of the students responding in an offensive manner to the black Hebrew Israelites who first addressed them nor did the students chant “build the wall” as some had speculated.

According to the report, the students asked their chaperones if they could perform a school cheer to drown out the remarks of the protest group. The students also said they felt “confused” by being approached by Phillips and although some performed a “tomahawk chop” none of the students said “racist or offensive statements” to Phillips.

Some students said chaperones had reminded them that if “they engaged in a verbal exchange with the black Hebrew Israelites, they would receive detention when returning to school.”

The investigators also noted that most of the students wearing the “Make America Great Again” hats had bought them in Washington during their visit. In previous years, chaperones said some students bought “Hope” hats in support of President Barack Obama. There is no school policy prohibiting political apparel on school-sponsored trips, the report said.

In his letter to the Covington Catholic High School community, Bishop Foys said that in the weeks since the original video went viral “two well-worn and oft-used adages have come to mind: Seeing is believing and perception is reality.”

He said the immediate reaction to the initial video “led almost everyone to believe that our students had initiated the incident and the perception of those few minutes of video became reality.”

“In truth, taking everything into account, our students were placed in a situation that was at once bizarre and even threatening. Their reaction to the situation was, given the circumstances, expected and one might even say laudatory,” he wrote.

He said the students could “never have expected what they experienced on the steps of the Lincoln Memorial” and added that their “stance there was surely a pro-life stance.”
– – –
Follow Zimmermann on Twitter: @carolmaczim