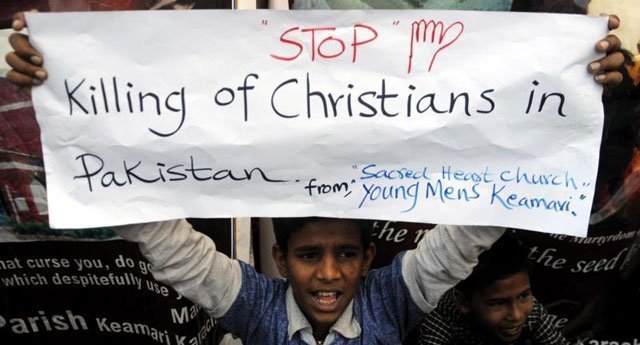 A Pakistani Christian boy holds a banner during a late March protest in Karachi after attacks on churches in Lahore. The U.S. State Department's annual report on the status of religious freedom around the world was released in Washington Oct. 14.

He said it demands that faith practitioners "understand that they have no right to coerce others into submission, conversion, or silence, or to literally take their lives because of their beliefs."

But coercion, violence and killings, in the name of religion, are occurring, as the dense congressionally mandated report outlines in its account of nearly 200 countries and territories.

In the Washington news briefing, Kerry said violators of religious freedoms have not just been governments but more recently groups, including terrorist organizations.

Rabbi David Saperstein, the State Department’s ambassador-at-large for international religious freedom, put it even more strongly, telling reporters the greatest emerging challenge to religious freedom around the world is "abhorrent acts of terror committed by those who falsely claim the mantle of religion to justify their wanton destruction."

He also said the report puts a "human face" on such threats.

In the Middle East, Sub-Saharan Africa and throughout Asia, terrorist groups "have set their sights on destroying religious diversity," the report says.

In those regions, it adds, religious intolerance has often led to violence while "governments stood by, either unwilling or unable to act in response to the resulting death, injuries and displacement."

Specific terrorist groups named in the report include: Daesh, an Arabic acronym for the Islamic State group, al-Qaida, al-Shabab and Boko Haram.

The groups have given captives the choice between conversion, slavery or death. Children, who have often been among the victims, also have been forced to witness or participate in executions even of their own family members. Entire populations of religious minority groups have been targeted for killings and young girls have been forced into slavery.

"The repugnance of these acts is only multiplied when the perpetrators seek to justify themselves by pointing a finger at God and claiming somehow that God licensed these acts," said Kerry.

Another trend highlighted in the report is the impact of blasphemy and apostasy laws particularly in Pakistan, Saudi Arabia, Egypt and Sudan.

The report, which can be viewed online on the State Department’s website, www.state.gov, is the 17th one issued by the State Department. Kerry said it aims to give governments "an added incentive" to honor the rights of their citizens and also to provide people "with an arsenal of facts" about abuses, problems and violations.

The report notes increased anti-Semitism and anti-Muslim actions and sentiments in Europe and highlights struggles for persecuted Christians in the Middle East.

Rabbi Saperstein, who began his appointment this year, said his office is "pushing very hard" to help the Christian community, particularly in the Ninevah Plain in northern Iraq, where last year thousands of Christians and nearly 40,000 Syriac Catholics, were driven out by Islamic State militants.

"Across the Nineveh Plain, church bells have pealed for 1,600 years. Today they are silent. And we are not going to rest until people have a right to live out their religious lives back in their home communities in accordance with their conscience," the ambassador-at-large said.

Pope Francis has similarly pleaded for an end to anti-Christian persecution in the Middle East, urging thousands gathered in St. Peter’s Square Aug. 30 to "do something to put a stop to the violence and oppression" and pointing out that there are more martyrs today "than there were in the first centuries" of Christianity.

Religious freedom was a key theme during the pope’s visit to the United States. It was central to his address in front of Independence Hall in Philadelphia, but he also mentioned it in his remarks at the White House and in his address to a joint meeting of Congress.

In Philadelphia, he spoke more at length on the topic, stressing that religious freedom "certainly means the right to worship God, individually and in community as our consciences dictate." But he also said such freedom "transcends places of worship and the private sphere of individuals and families" since it is "part of the culture of every people and every nation."

The pope also spoke about the need to stop the abuses to religious freedom. When religion is used as a pretext for hatred and brutality or when religions are reduced to subcultures without a voice in the public square, he said, "it is imperative that the followers of the various religious traditions join their voices in calling for peace, tolerance and respect for the dignity and the rights of others."

Editor’s Note: The full report can be accessed at www.state.gov/j/drl/rls/irf/religiousfreedom/index.htm#wrapper.