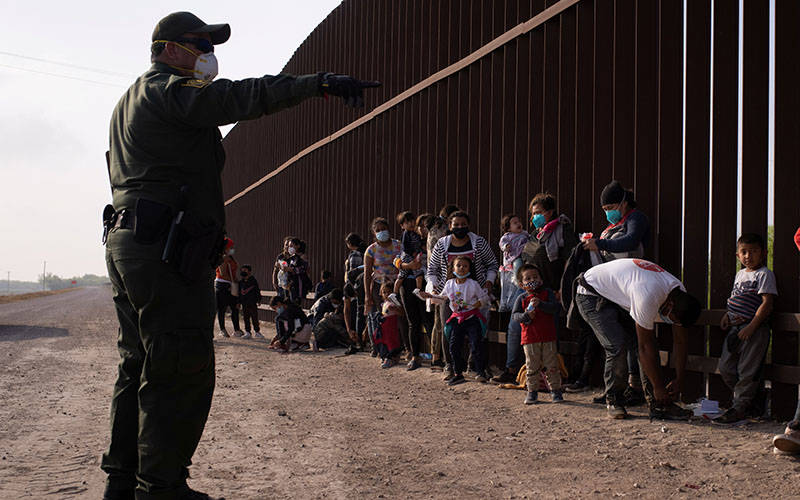 A Border Patrol agent in Penitas, Texas, instructs asylum-seeking migrants March 17, 2021, as they line up along the border wall after crossing the Rio Grande. Immigration and Customs Enforcement reports more than 12,000 coronavirus cases in detention centers. (CNS photo by Adrees Latif/Reuters)

WASHINGTON (CNS) — A recent analysis by The New York Times found evidence for what many Catholic organizations and other entities warned about at the height of the COVID-19 pandemic in the United States — the faster spread of the coronavirus among those detained in facilities for immigration violations.

The newspaper in an April 25 report said Immigration and Customs Enforcement, or ICE, facilities had “an average infection rate five times that of prisons and 20 times that of the general population.” In the most current data, the agency has reported 12,000 cases of COVID-19 in its facilities since the start of the pandemic.

In an April 2020 statement, El Paso Bishop Mark J. Seitz, Cardinal Joseph W. Tobin of Newark, New Jersey, and Cardinal Alvaro Ramazzini of Huehuetenango, Guatemala, called for an immediate release “of as many migrants and asylum-seekers from detention as possible,” fearing the spread of the virus inside and outside the immigration detention centers.

Back then, faith-based organizations, which include Catholic members, such as Faith in Action and the Hope Border Institute, called for measures to slow the spread of the virus in refugee camps, migrant shelters and detention centers and to provide migrants and refugees equal access to prevention, testing and treatment for COVID-19.

Migrant advocates said they worried the close quarters of detention and the lack of adequate health care put the detainees as well as the personnel of the facilities in danger.

The Times report pointed out how lack of testing led to outbreaks inside the facilities and eventually affected the community in the surrounding areas where the buildings are located. It highlighted the case of a nurse believed to have contracted the virus through her work in a detention center, which eventually led to her death.

While ICE has provided numbers for infection rates among detainees, it has not made data publicly available on infections of staff or contractors who go and in out of the centers, the report said.

Bishop Seitz, whose diocese near the U.S.-Mexico border was among the hardest hit in the country, has repeatedly called for the release of nonviolent detainees.

“By keeping nonviolent migrants in immigration custody, we are placing everyone in danger. Together, I know we can overcome this crisis,” he said in an April 7, 2020, statement. “I also invite our local government leaders to join me in calling on ICE for an urgent dialogue on the need to release nonviolent offenders. This cannot happen soon enough. Our lives depend on it.”

In the latest reported outbreak, a privately owned ICE facility in Aurora, Colorado reported April 27 that 96 detainees and a staffer had tested positive for COVID-19.

Tags: COVID-19 Pandemic, Refugees
Copyright © 2022 Catholic News Service, Inc. All rights reserved. Linking is encouraged, but republishing or redistributing, including by framing or similar means, without the publisher's prior written permission is prohibited.