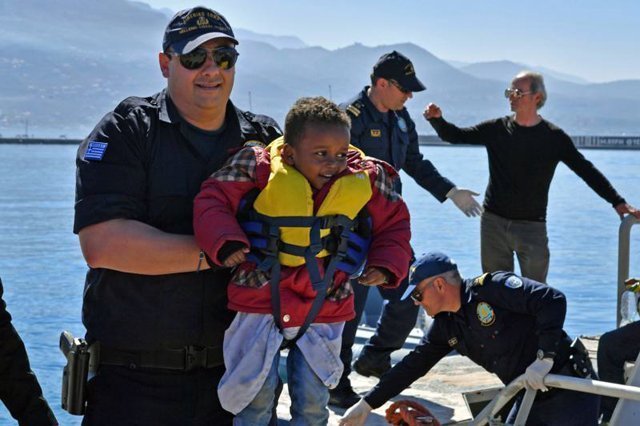 A member of the Coast Guard carries a young refugee and other survivors off a rescue boat April 17 at the port of Kalamata, Greece. The survivors told U.N. staff that they had been part of a group of between 100 and 200 people who departed from Libya the previous week.
ROME (CNS) — The same day Pope Francis brought 12 Syrian refugees to Rome from Greece, a merchant ship rescued 41 refugees, including a 3-year-old child. They told human rights workers they saw as many as 500 others drown when the refugees’ boat sank.
The U.N. Refugee Agency reported April 20 that its personnel interviewed the rescued men and women who said they were being transferred to a large, overcrowded boat, which sank in the Mediterranean between Libya and Italy.
The survivors — 23 Somalis, 11 Ethiopians, 6 Egyptians and a Sudanese — were rescued April 16, the same day the pope visited refugees on the Greek island of Lesbos.
Taken to Kalamata, Greece, the survivors told U.N. staff that they had been part of a group of between 100 and 200 people who departed from Libya the previous week.
"After several hours at sea, the smugglers in charge of the boat attempted to transfer the passengers to a larger ship carrying hundreds of people in terribly overcrowded conditions," the U.N. Refugee Agency said in a statement. "At one point during the transfer, the larger boat capsized and sank."
The survivors estimated there were between 300 and 400 people already on the larger boat; as of April 21, neither Italian nor Greek authorities had reported bodies being washed ashore. If the deaths are confirmed, the U.N. agency said, it would be "one of the worst tragedies involving refugees and migrants in the last 12 months."
The 41 survivors included those who had not yet boarded the larger vessel, as well as some who managed to swim back to the smaller boat, the statement said.
The International Organization for Migration, which also had staff interview the survivors, shared the story of "a man named Mohamed, from Ethiopia." He said he was traveling with his family; "I saw my wife and my 2-month old child die at sea, together with my brother-in-law," Mohamed said. "The boat was going down … down …, all the people died in a matter of minutes. After the shipwreck we drifted at sea for a few days, without food, without anything, I think I was going to die. When we were rescued we told them that we wanted to go to Italy, but we have been brought to Greece."
So far this year more than 179,500 refugees and migrants have reached Europe by sea across the Mediterranean and Aegean seas. At least 761 have died or gone missing attempting the journey, the U.N. Refugee Agency said.
Copyright © 2023 Rochester Catholic Press Association, Inc. All rights reserved. Linking is encouraged, but republishing or redistributing, including by framing or similar means, without the publisher's prior written permission is prohibited.