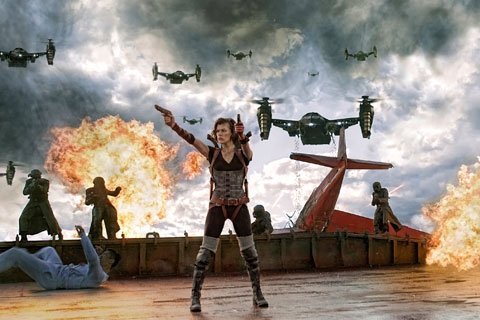 NEW YORK (CNS) — The nearly plotless shoot-’em-up "Resident Evil: Retribution," the fifth entry in the series based on the video game, retains its usual high body count but lowers the splatter factor quite a bit.

Again, writer-director Paul W.S. Anderson puts eternally lithe Milla Jovovich as Alice, whose reaction to the dreaded T-virus has given her superpowers, into her iconic black tights to save the planet from an increasingly pesky infestation of flesh-eating zombies created by that biological weapon. She has a sidekick, Ada Wong (Bingbing Li), and again fights off gun-toting rivals Rain (Michelle Rodriguez) and the spider-clad Jill Valentine (Sienna Guillory).

In addition to the undead, Alice also has to negotiate the machinations of the Umbrella Corp., which unleashed the virus, and her occasional outbreaks of maternal feelings when children are threatened. She accomplishes all this without ever smearing her lipstick. What a gal!

An abundance of zombies bursting out of closets and chasing victims down streets puts the boredom factor here at snooze-inducing.

The slow-motion fighting is completely by rote, but there’s far less slicing and dicing and more clean bullet holes this time around.