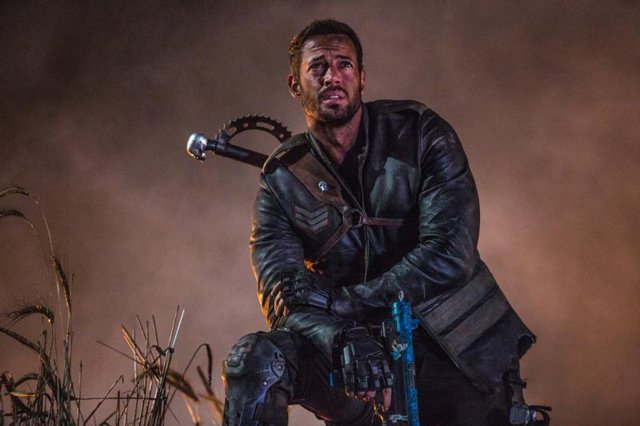 William Levy stars in a scene from the movie "Resident Evil: The Final Chapter." The Catholic News Service classification is A-III -- adults. The Motion Picture Association of America rating is R -- restricted. Under 17 requires accompanying parent or adult guardian.
By Kurt Jensen
Catholic News Service
NEW YORK (CNS) — "Resident Evil: The Final Chapter" (Screen Gems) is the sixth — and presumably last — in a series of video game-based films that began back in 2002.
The movies have always kept their connection to the console on open display. This makes them ideal for those who like their zombies, shootouts and occasionally gory incidents of flesh-eating served up with a minimum of story line or dialogue. For anyone beyond the fan base, though, frustration — and a possible headache — awaits.
Be that as it may, Alice (Milla Jovovich, as ever), having grown stout in the service, squeezes into her famous black tights to battle the undead — as well as the evil Umbrella Corporation led by the diabolical Dr. Isaacs (Iain Glen). Her sidekick, Claire (Ali Larter), provides occasional assistance.
Director and writer Paul W.S. Anderson (Jovovich’s real-life husband) provides not so much a plot as a goal, as if this were a game level.  Alice has 48 hours to find the airborne antidote to the T-virus. A pandemic of said malady has turned the planet — what we see of it, anyway, especially the remnants of Washington — into a dystopian moonscape populated by flesh-craving zombies.
Alice herself had the T-virus. But it seems to have been just her cup of T, since she somehow gained superpowers from her illness.
On this adventure, she fights Dr. Isaacs with whatever weapons come to hand, leads skirmishes against the zombies (who prefer to run in packs), and has occasional encounters with the Red Queen (Ever Anderson), a digitized younger version of herself who provides instructions and reminds the audience what Alice is supposed to be doing.
This series, while well short of classic, has nonetheless proved quite durable. And Jovovich puts in the effort to keep Alice a moral force of a sort. She does, after all, stay grimly focused on the collection of villains she’s up against.
The film contains gun, knife and martial-arts violence with some gore and fleeting foul language. The Catholic News classification is A-III — adults. The Motion Picture Association of America rating is R — restricted. Under 17 requires accompanying parent or adult guardian.
– – –
Jensen is a guest reviewer for Catholic News Service.
Copyright © 2023 Catholic News Service, Inc. All rights reserved. Linking is encouraged, but republishing or redistributing, including by framing or similar means, without the publisher's prior written permission is prohibited.