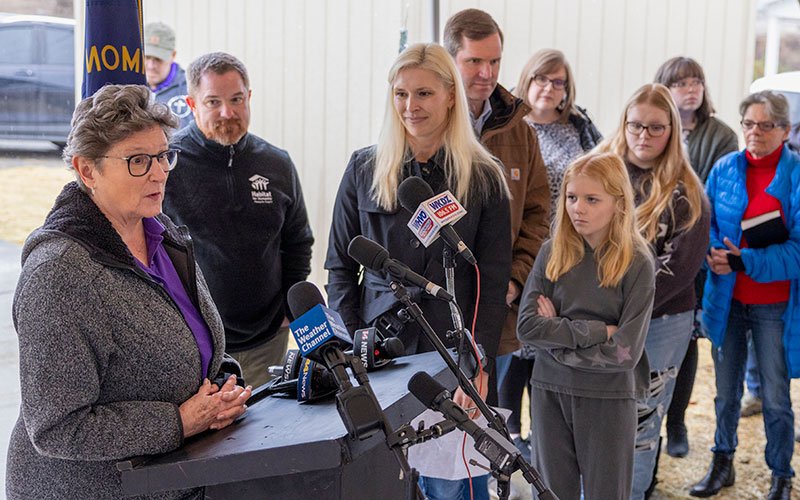 Kristan Schlichte, senior director of membership for Catholic Charities USA, speaks Dec. 10, 2022, at a dedication for Jerry Vandiver's home, exactly one year after a tornado devastated his home and the surrounding community in Dawson Springs, Ky., Dec. 10, 2021. Catholic Charities USA is working closely with several other organizations to help rebuild Dawson Springs and the surrounding regions. (CNS photo by James Kenney via The Western Kentucky Catholic)

Mourning, prayer and a resolve to rebuild follow devastating tornadoes

DAWSON SPRINGS, Ky. (CNS) — Visitors and residents of Dawson Springs crowded under a tent Dec. 10 to escape the steady rains during the dedication of a local man’s rebuilt home — a home that one year ago had been destroyed by the historic western Kentucky tornadoes.

Jerry Vandiver, sporting a gray hoodie and a Catholic Charities baseball cap, told those gathered, “I wish I could say how grateful I am to everyone.”

Earlier that morning, Vandiver had led visitors on a tour of his new house — visitors including Kentucky Gov. Andy Beshear and Bishop William F. Medley of Owensboro, whose diocese and Catholic Charities office have been leaders in local tornado recovery efforts.

New homes in the process of being completed

From Vandiver’s driveway, multiple new houses could be seen in the process of being completed.

Vandiver later told The Western Kentucky Catholic, the diocesan newspaper, that “there are a lot of good people out there” who have stepped up to help survivors.

Vandiver has been a client of Catholic Charities of the Diocese of Owensboro‘s disaster case management program as Habitat for Humanity worked on rebuilding his home. He said he is most grateful for “organizations coming together — they haven’t forgotten us.”

He said this gives him the greatest hope for the future.

Speaking at the dedication ceremony — during which Vandiver was formally presented with a Bible and keys to his new house — Bishop Medley said he is proud to see the community organizations that have collaborated to accompany survivors.

“We did what we were supposed to do; we became partners,” said the bishop, recalling that within the first week after the tornadoes, Catholic Charities USA sent $1 million to the diocese for relief and recovery.

To date, Catholic Charities USA has provided about $2.9 million in gifts and $40,600 in grants — both of which are to be used for tornado recovery efforts — to the Owensboro Diocese.

The bishop said the diocese’s pastoral center was flooded with calls immediately after the tornadoes, as others sought ways to donate and assist.

Parishes across western Kentucky took up a special collection for their storm-impacted neighbors; the amount ultimately totaled $409,419. And dioceses from around the United States gave a total of $2,117,880 — with $1.12 million of that being sent by Kentucky’s Louisville Archdiocese and Covington and Lexington dioceses.

Kristan Schlichte, senior director of membership for Catholic Charities USA, traveled from the national office in Virginia to attend the dedication and speak at Vandiver’s home dedication.

“Being here for Dawson Springs is ‘coming home’ for anyone coming from Catholic Charities,” she told the crowd.

She told The Western Kentucky Catholic that she appreciates witnessing how people in diverse communities like western Kentucky — home to Catholics and non-Catholics alike — “come together to work together.”

Parish continues to worship in shed

Several members of Resurrection Parish in Dawson Springs attended the home dedication. The day was bittersweet for them, since Resurrection’s church was destroyed in the tornadoes, but they hope to break ground for the new building in 2023.

Currently, the parish continues to worship in a metal outbuilding on the property of parishioners Donnie and Rhonda Mills.

“I feel hopeful; I am glad to see the houses going up,” said Ashley Marsili, who in addition to being a parishioner of Resurrection also is a Catholic Charities volunteer case manager.

Her husband, Deacon Mike Marsili, said they recently watched a television special about the tornado recovery.

Deacon Marsili said he is grateful his bishop has continued to speak about the tornadoes so that people do not forget.

An example of that was Bishop Medley reflecting on the storms during the diocese’s Dec. 6 eucharistic revival convocation —  hearkening back to a week after the tornadoes, when the bishop flew in a plane across the path of destruction, blessing all below with the Blessed Sacrament in a monstrance.

At Vandiver’s home dedication, Beshear spoke of the 81 lives lost to the tornadoes in Kentucky, including 10 of those being in Dawson Springs.

“Today, one year after the deadliest tornado event in our state history, we are making progress,” he said, “but I know those families continue to carry that grief.”

He said his administration plans to mail 10,000 checks with a $1,000 balance to those who filed an insurance claim or received federal aid.

Chris Smiley, the mayor of Dawson Springs, reflected on the progress that has been made in a year — including nine other homes Habitat for Humanity is currently building in collaboration with other community partners.

“Thank you, Jesus, for getting us where we are now,” he prayed aloud.

Barnstead is editor of The Western Kentucky Catholic, newspaper of the Diocese of Owensboro.