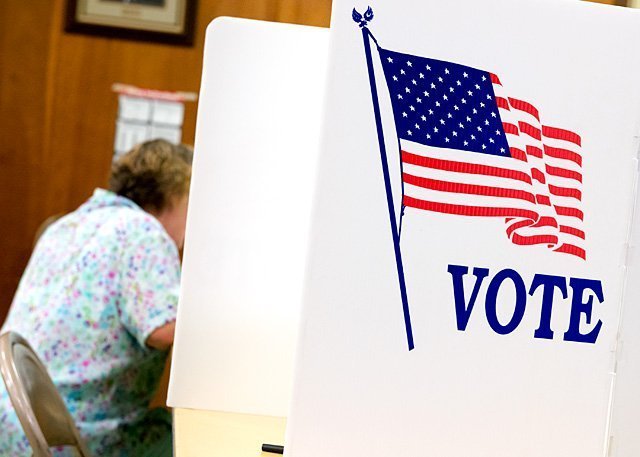 The U.S. bishops assert that Catholics are called to participate in political ife and vote faithfully. Above, Therese Mangold votesin a primary election Sept. 13 at the Gates Town Hall.

If you consistently vote along party lines or based on just a couple of concerns, chances are your preparation for Election Day Nov. 8 will be quite brief.

Or, perhaps you are inclined not to vote at all, feeling that a single vote doesn’t matter or because you are disillusioned with the candidates — an oft-voiced complaint in this year’s presidential race.

Yet according to the bishops of our country, Catholics are obliged not only to vote but also to expend considerable effort in weighing how candidates’ platforms line up with priorities stressed by Catholic teaching.

“In the Catholic tradition, responsible citizenship is a virtue, and participation in political life is a moral obligation,” states paragraph 13 of “Forming Consciences for Faithful Citizenship,” a document issued by the U.S. Conference of Catholic Bishops prior to each presidential election. Summarizing church teachings on public life as well as key moral issues, the full text is available at www.faithfulcitizenship.org.

“As citizens, we should be guided more by our moral convictions than by our attachment to a political party or interest group,” paragraph 14 in the bishops’ document adds. Such convictions should be rooted in Catholic social teaching and arise more from concern about the common good than from individual interests, the bishops note.

Nevertheless, it can be a daunting task to apply such principles at the polls. In their document’s introduction, the bishops list numerous examples of domestic and foreign policies that are at odds with Catholic teaching: abortion; physician-assisted suicide; the redefinition of marriage “by the courts, political bodies, and increasingly by American culture itself”; an excessive use of material goods and the destruction of natural resources; attacks on fellow Christians and religious minorities throughout the world; a narrowing redefinition of religious freedom; economic policies that don’t prioritize the poor; a broken immigration system and worldwide refugee crisis; and “wars, terror, and violence that threaten every aspect of human life and dignity.”

With so many concerns to weigh, identifying an ideal candidate is no easy process, acknowledged Christopher Belcher, who attends East Rochester’s St. Jerome Parish.

“As Catholics we make it a lot harder on ourselves,” he said with a laugh, adding, “You really have to think hard, research hard and pray hard.”

However, Belcher — who is in the process of becoming Catholic — said he’s striving to educate himself in order to make the best possible decision come Election Day. In addition to following various news outlets, he attended an Aug. 1 program about Catholic voting as part of the Theology on Tap discussion series for Catholic young adults. Belcher, 30, went on to organize an open-forum gathering on the same topic at his Brighton home Aug. 31, with eight young adults attending.

Meanwhile, columns in several parish bulletins have encouraged parishioners to do their homework, register to vote and make sure they get to the polls.

“I urge every one of you to vote,” Deacon George Kozak wrote in the Aug. 7 bulletin for the Tompkins County cluster of All Saints, Lansing; Holy Cross, Dryden; and St. Anthony, Groton. Deacon Kozak noted that his parents were immigrants to this country and “both considered voting an important duty. So, I urge you to read up on the candidates, follow the debates, and most importantly, vote.”

Of the numerous priorities listed in “Forming Consciences for Faithful Citizenship,” the bishops are notably emphatic about life issues.

In paragraphs 22 and 23, they call for Catholics to always oppose such “intrinsically evil” acts as abortion, euthanasia, human cloning and destructive research on human embryos, as emphasized in the consistent ethic of life.

The bishops further state that “other direct assaults on innocent human life, such as genocide, torture, and the targeting of noncombatants in acts of terror or war, can never be justified. Nor can violations of human dignity, such as acts of racism, treating workers as mere means to an end, deliberately subjecting workers to subhuman living conditions, treating the poor as disposable, or redefining marriage to deny its essential meaning, ever be justified.”

However, the bishops note the difficulty of identifying a single candidate who supports all Catholic priorities. In cases in which all candidates support an intrinsically evil act, they counsel voting for no one at all or for “the candidate who is deemed less likely to advance such a morally flawed position and more likely to pursue other authentic human goods” (No. 36).

The bishops’ quadrennial document never directly addresses specific candidates or parties, but at least one leading U.S. prelate has been outspoken on the need for Catholics to put church teaching ahead of party politics.

In 2012, Philadelphia Archbishop Charles J. Chaput told Catholic News Service that church teaching against abortion “requires absolute adherence” on the part of Catholic voters as well as loyalty to church above party. 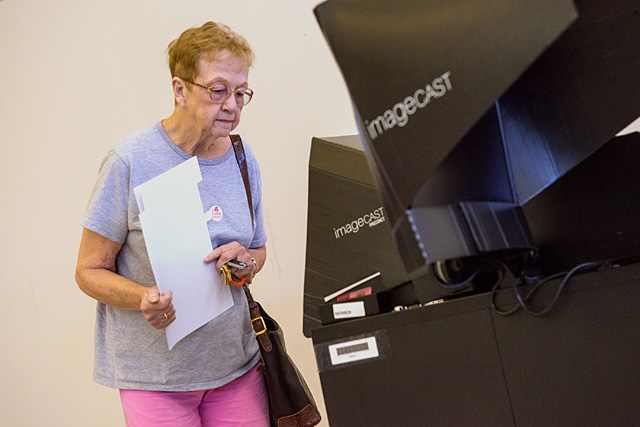 According to the U. S. bishops, Catholics are not only morally obligated to vote, but also to weigh candidates’ platforms against the teachings of the church. Above, Fran Waldrop casts her ballot in the Sept. 13 primary election at St. Jude the Apostle Church in Gates.

Yet writing in an Aug. 12 column on CatholicPhilly.com, news website of the Archdiocese of Philadelphia, he noted that Democrat Hillary Clinton and Republican Donald J. Trump both have “astonishing flaws” and that he has never been more happy to be a registered independent.

“Both major candidates are — what’s the right word? so problematic — that neither is clearly better than the other,” the archbishop observed.

Similarly, Father James Hewes, a diocesan senior priest, noted that the two leading presidential candidates have historically high unfavorable ratings up to this point. Father Hewes, a longtime pro-life activist in the Diocese of Rochester, said his conscience is leading him toward a write-in vote for a politician who upholds the consistent life ethic — a step he has taken “for at least the last 10 presidential elections.”

Religious leaders cannot directly endorse or oppose any candidate or political party due in part to U.S. tax regulations prohibiting such practices by tax-exempt organizations. Paragraph 58 of “Forming Consciences for Faithful Citizenship” states: “The church is involved in the political process but is not partisan. The church cannot champion any candidate or party. Our cause is the defense of human life and dignity and the protection of the weak and vulnerable.”

Yet prominent Catholics are free to address the issues and emphasize the need for believers to make their voices heard. That’s what New York state’s bishops did in a March 2016 statement on the importance of voting, noting that on average over the past four years, only 40 percent of eligible voters statewide turned out on Election Day.

Even if Catholic voters are tempted to skip voting for a presidential candidate, Stack pointed out that their votes can still help decide many important elections at the state and local levels.

“Please go to the voting booth and vote down ticket. There are plenty of other races,” she said.

Anne LeBlanc likewise cautioned against skipping Election Day no matter how tempting it may seem, asserting that “when you have the ability to limit evil and you don’t do it, that’s wrong.”

LeBlanc, president of the Rochester Area Right to Life Committee Inc., was the guest speaker at the Aug. 1 Theology on Tap session attended by Belcher and approximately 35 other young adults. She recalled for her audience how a married couple once told her they were ardently pro-life and highly active in their parish. But when she asked if they voted regularly, “They said they ‘don’t get involved with that.'”

Not only is it vital to vote, but Catholic involvement can take on many other forms as well, notes paragraph 16 of “Forming Consciences for Faithful Citizenship.” The U.S. bishops suggest that Catholic men and women “become actively involved: running for office; working within political parties; communicating their concerns and positions to elected officials; and joining diocesan social mission or advocacy networks, state Catholic conference initiatives, community organizations, and other efforts to apply authentic moral teaching in the public square.”

“This is not a time for retreat or discouragement; rather, it is a time for renewed engagement,” the bishops state.