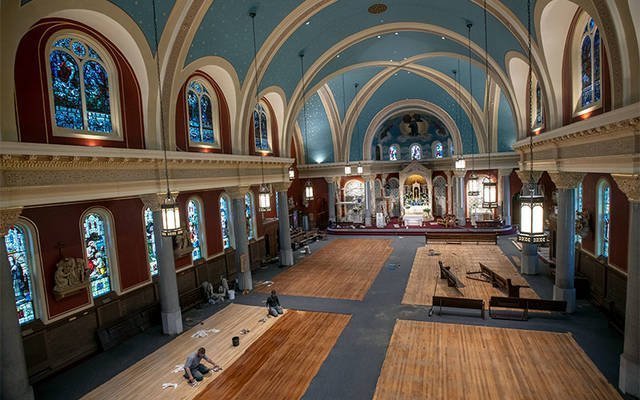 In 1954, an artist named Walter E. O’Brien spent many hours beautifying the inside of St. Mary Church in Canandaigua.

O’Brien painted statues and Stations of the Cross, enhanced the church’s existing painting of the Assumption of Mary into heaven, and designed and created stencils, which he used for painting patterns on the church walls. The artist also decorated the interiors of many churches within the Diocese of Rochester, but his work at St. Mary was close to his heart because that was his own parish.

That’s what made it so painful when much of his work was painted over years later during a renovation project, according to his son, Thomas O’Brien. A large-scale project currently underway at St. Mary, however, has restored some of Walter O’Brien’s work and added a number of new touches as well.

“They’re renovations, but we’re calling them restorations because there’s a lot in the church that is being restored,” explained Father Michael Costik, pastor of St. Benedict Parish, which comprises St. Mary Church and St. Bridget/St. Joseph Church in East Bloomfield.

The restoration project was made possible by a $1.6 million capital campaign, which also funded other maintenance projects at St. Mary and St. Bridget/St. Joseph. Highlights of St. Mary’s restoration include:

‚Ä¢ the painting of the church’s interior;

‚Ä¢ the replacement of incandescent bulbs with LED bulbs inside light fixtures;

‚Ä¢ an upgrade of dated wiring;

‚Ä¢ replacement of the original pews;

‚Ä¢ refinishing of the oak floor beneath pews;

‚Ä¢ the installation of hardwood flooring in the sanctuary and new carpeting in the aisles of the nave and transepts;

‚Ä¢ the construction of two oak-paneled confessionals; and

‚Ä¢ the replacement of speakers and microphones.

“I don’t think that St. Mary’s has ever had this extensive of an overhaul. It’s really beautiful. It really is a building that was made to be adorned well,” Father Costik said.

The church’s original tabernacle also has been restored, although that work was paid for by a generous parishioner, he added.

“That’s back in the church, but we’re not going to use it until the bishop comes and rededicates it. We found the original sanctuary lamp, which is being restored now too,” Father Costik said. “I put a real strong emphasis on the importance of the liturgical space being appropriate and beautiful, and the people were more than happy to go along with me in supporting that.”

Parishioners also have been supportive of the new color scheme inside the church, which represents a dramatic departure from the previous white interior. Father Costik said the monochromatic interior didn’t do justice to the church’s architectural details.

“The color scheme that we went with is rather strong. We could have gone with the safe colors, beiges and whites, and we put red up on the walls,” Father Costik said.

The ceiling has been painted blue with gold stars mimicking the night sky, and gold accents have been used throughout the church. Parishioners’ reactions to the new vibrant colors have been mostly positive, Father Costik remarked.

“People will come up and they’ll say, ‘I didn’t think that red was going to look good, but I was wrong. It’s really nice.’ The dark walls make the stained glass really pop out at you, so people are saying that the stained glass is really framed well,” he said.

Artisans from Buffalo-based Swiatek Studios also restored a large mural in the church and some of Walter O’Brien’s work, using one of his original stencils. Walter O’Brien died in 1986, but his son had kept the drawing upon which his father had based one of his original stencils for the church. When Thomas O’Brien learned about the restoration project, he gave the stencil to Father Costik.

“We were going to do a different stencil pattern in the sanctuary and then Tom gave me that. ‚Ä¶ We really restored a lot of Walter O’Brien’s work,” Father Costik said.

The new pews, which were delivered and put together in late May, are almost identical to the original ones, which “were literally being held together by bubble gum that people stuck on there,” Father Costik said. Parishioners were able to take home the old pews in exchange for donations, and many of those parishioners hired the carpenter who built the confessionals to cut the pews down to a more manageable size.

Father Costik said he is grateful for parishioners’ support of the project and patience with the inconveniences that have cropped up since the project began in February. The work being done in the church has forced the parish to offer some Masses in the parish hall and others in the gymnasium of St. Mary School, yet parishioners have been kept abreast of the progress by regular updates from Amy Corron, St. Benedict’s director of communications and parish life.

At least once a week Corron posted pictures of the progress online and emailed them to interested parishioners.

“I love getting feedback from the parishioners and sharing that with the rest of the staff and the restoration crews,” she said.