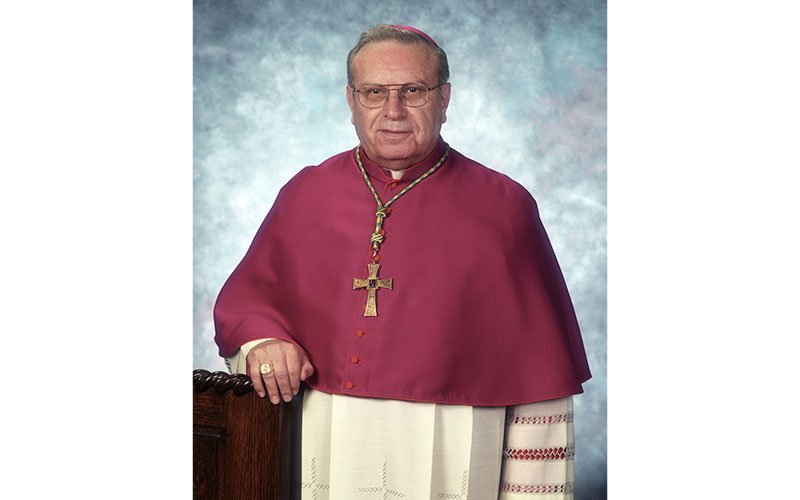 Retired Bishop Edward U. Kmiec of Buffalo, N.Y., is seen in this 2004 photo. (CNS photo by Rebecca A. Horton via Western New York Catholic)

Bishop Kmiec had been in declining health during the past several months, the diocese said in a July 12 statement.

Funeral plans have not yet been announced.

“We commend to our loving and merciful Lord the devoted soul of our brother, Bishop Edward Kmiec,” said Bishop Edward B. Scharfenberger of Albany, New York, who is apostolic administrator of the Buffalo Diocese.

“He served long and faithfully the church which he loved greatly as a priest and bishop, and as one who’s kindness, warm and pastoral spirit guided, comforted and revealed Christ to so many throughout his nearly 60 years of priesthood,” Bishop Scharfenberger said.

“We mourn his passing, but are also joyous in the sure knowledge that he is now with the One who motivated his life’s purpose and who has called this good and faithful servant home,” he added.

Late July 13, the Buffalo Diocese announced private funeral arrangements for Bishop Kmiec and a time for the general public to pay its respects.

On July 16, the hours of noon to 7 p.m. are scheduled for the general public as the bishop’s body lies in repose in the main sanctuary of the Cathedral of St. Joseph. Social distancing will be required, along with the wearing of face masks to reduce the risk of spreading the novel coronavirus.

A 7 p.m. Mass will follow, but attendance is restricted to Bishop Kmiec’s immediate family and diocesan representatives.

His funeral Mass will be celebrated at noon July 17 at the cathedral, but because of the ongoing threat of the coronavirus and the required capacity limitations, it is not open to the public. It will be livestreamed; the link for the livestream will be available on the diocesan website www.buffalocathedral.org.

The funeral liturgy is restricted to immediate family members of Bishop Kmiec and invited lay, clerical and religious representatives of the Diocese of Buffalo. New York Cardinal Timothy M. Dolan of New York will preside at the Mass, with Bishop Scharfenberger as the principal celebrant. Other bishops from the New York region are expected to attend. Entombment will follow in the Bishops Crypt, directly behind the tabernacle in the cathedral.

Bishop Kmiec headed the Buffalo Diocese from 2004 until his retirement in 2012. Before that, he was bishop of Nashville, Tennessee, from 1992 until his appointment to Buffalo. He was an auxiliary bishop of the Diocese of Trenton, New Jersey, from 1982 to 1992.

His tenure as Nashville’s bishop “was a time of growth of the Catholic community in middle Tennessee,” the Nashville Diocese said in a July 12 statement.

There was “not only an increase in the Catholic population but the establishment of new parishes and schools including Pope John Paul II High School in Hendersonville,” the diocese said. “He is remembered fondly as a shepherd and friend by many in the Diocese of Nashville. Bishop J. Mark Spalding has requested prayers for the repose of his soul and the souls of all the faithful departed. May he rest in peace.”

Born June 4, 1936, in Trenton, New Jersey, Edward Urban Kmiec was the fifth of five children, all born in the United States, to Thecla Czupta Kmiec and John Kmiec, who immigrated to the United States from Poland before World War I.

In 1954, Edward Kmiec left the Trenton area to attend St. Charles College in Catonsville, Maryland, and later St. Mary’s Seminary in Baltimore, where he received his bachelor of arts degree in 1958. He was then sent to Rome for his theological studies, residing at the Pontifical North American College and attending the Pontifical Gregorian University.

He was ordained to the priesthood for Trenton Diocese at St. Peter’s Basilica in Rome Dec. 20, 1961, and his first Mass was celebrated at St. Peter’s in the Chapel of Our Lady of Czestochowa. He continued his studies and received his licentiate of sacred theology degree in 1962 from the Pontifical Gregorian University.

Upon returning to the United States in the summer of 1962, Bishop Kmiec served as associate pastor of St. Rose Parish in Belmar, New Jersey. In 1965, he was appointed secretary and master of ceremonies to Trenton Bishop George W. Ahr, whom he served in that capacity through 1980.

In retirement, Bishop Kmiec resided at the St. Joseph’s Cathedral rectory in Buffalo.

All of Bishop Kmiec’s siblings preceded him in death. He is survived by several nieces and nephews, as well as several grandnieces and grandnephews.