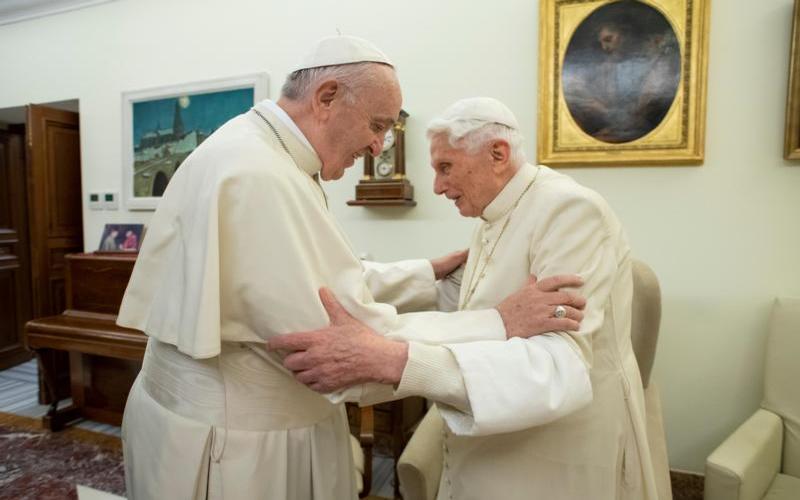 “Thank God, all of us in the Mater Ecclesiae Monastery are well,” Archbishop Georg Ganswein, the retired pope’s personal secretary, told Avvenire, the Italian Catholic newspaper.

The retired pope, the archbishop and a group of consecrated women live in the former monastery in the Vatican Gardens.

Usually for his birthday, Pope Benedict is joined by his older brother, Msgr. Georg Ratzinger, who turned 96 in January, but Archbishop Ganswein told Vatican News that, this year, the two spoke on the phone. Msgr. Ratzinger’s call was just one of many birthday calls the retired pope had received.

Despite the lockdown, Archbishop Ganswein told Avvenire April 16, the day would be “more festive” than usual in the monastery. And, he told Vatican News, it would feature the singing of Bavarian folk songs.

The day began, as usual, with Mass in the monastery chapel.

The retired pope, the archbishop said, prays each day for the sick and for those suffering because of the COVID-19 pandemic.

“He was especially struck by the many priests, doctors and nurses who have died while caring for those sick with the coronavirus, particularly in northern Italy,” Archbishop Ganswein said.

The archbishop also said the retired pope received a special present, a pre-publication copy of “Benedikt XVI: Ein Leben” (“Benedict XVI: A Life”), an almost 1,200-page biography written by Peter Seewald, who collaborated with the retired pope on several bestselling books. The volume will be released in German in May.

“Seewald intended to give it to the pope emeritus in person,” the archbishop said, “but, unfortunately, the pandemic made that impossible.”

The retired pope was born April 16, 1927, in the Bavarian town of Marktl am Inn and was ordained to the priesthood in 1951. Before his election as pope in 2005, succeeding St. John Paul II, he served for 24 years as prefect of the Congregation for the Doctrine of the Faith.

Pope Benedict stunned the world in 2013 when he announced that he would step down, becoming the first pope in almost 600 years to resign.