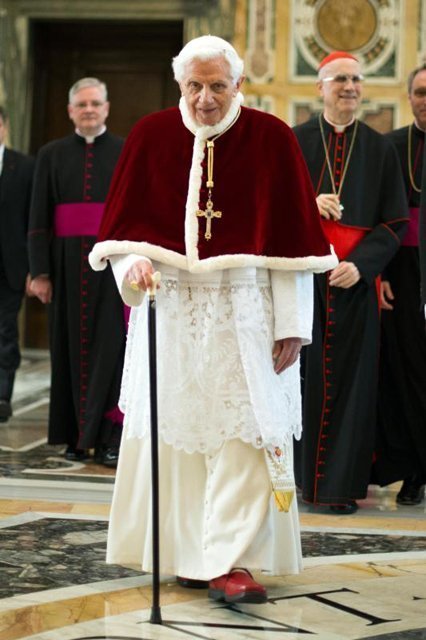 Pope Benedict XVI walks with his cane in 2013 at the Vatican following his final general audience. Retirement has given the 89-year-old Pope Benedict what he describes as the gift of silence to enter more deeply into prayer, especially with the Psalms and the writings of early church theologians.

VATICAN CITY (CNS) — As he prays in his house in the Vatican Gardens and, especially, as he ages, retired Pope Benedict XVI said he finds many Scripture passages "more challenging in their greatness and gravity."

Retirement has given the 89-year-old Pope Benedict what he describes as the gift of silence to enter more deeply into prayer, especially with the Psalms and the writings of early church theologians, but the inevitable approach of death also makes his failings and God’s judgment a more pressing concern, he said.

"Despite all the confidence I have that the loving God cannot forsake me, the closer you come to his face, the more intensely you feel how much you have done wrong," the retired pope told Peter Seewald, a German writer.

Pope Benedict’s reflections on his life and his discussion of how his prayer life has changed as he ages are included in Seewald’s new book-length interview, "Last Testament," which will be released in English by Bloomsbury in November. The German and Italian editions were in bookstores Sept. 9.

"I can now pray the breviary deeply and slowly," the retired pope said, "and thereby deepen my friendship with the Psalms, with the Fathers" of the church.

He said he uses a whole week to prepare his Sunday homily for his small household, thinking about the Scripture readings, allowing his thoughts to "mature slowly, so I can sound out a text from many different angles: What is it saying to me? What is it saying to the people here in the monastery?"

— The "Suscipe" of St. Ignatius of Loyola, which begins: "Take, Lord, receive all my liberty, my memory, my understanding, and my entire will, all I have and call my own. You have given all to me. To you, Lord, I return it."

— A prayer from St. Francis Xavier: "I do not love you because you can give me paradise or condemn me to hell, but because you are my God."

— And the General Prayer composed in German by St. Peter Canisius, which begins: "Almighty and eternal God, Lord, heavenly Father. Look with the eyes of your gratuitous mercy at our sorrow, misery and distress; have mercy on all Christian believers."

Pope Benedict, who knew and continues to admire the work of Father Romano Guardini, said he agreed with an affirmation the priest made, "In old age, it does not get easier, but more difficult."

"There is something true in it," he said. "On the one hand, in old age you are more deeply practiced, so to speak. Life has taken its shape. The fundamental decisions have been made."

But at the same time, the pope said, "one feels the difficulties of life’s questions more deeply; one feels the weight of today’s godlessness, the weight of the absence of faith, which goes deep into the church. But then one also feels the greatness of Jesus Christ’s words, which evade interpretation more often than before."

Although sometimes comforted by new insights, he said he recognizes how "the depths of the word (of God) are never fully plumbed. And some words of wrath, of rejection, of the threat of judgment certainly become more mysterious and grave and awesome than before."