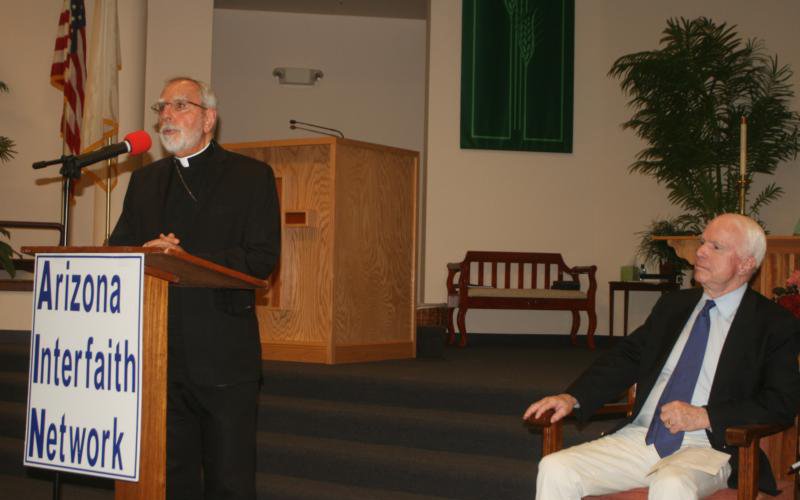 Then-Bishop Gerald F. Kicanas of Tucson, Ariz., speaks alongside U.S. Sen. John McCain, R-Ariz., during a 2013 forum on immigration reform at the United Methodist Church in Casa Grande, Ariz. McCain died Aug. 25 at age 81 at his home in Sedona, Ariz., after a long battle with brain cancer. (CNS photo by Catholic Outlook files)

“He was a very principled man who had a passion for service,” Bishop Kicanas told the Catholic Outlook, newspaper of the Tucson Diocese, Aug. 27.

The two worked together on immigration reform issues, especially in 2007, when McCain was trying to balance the political pressures of securing the Republican nomination for the 2008 presidential election with his bipartisan attempts at immigration reform.

Bishop Kicanas recalled an office visit in which McCain challenged him to help activate Hispanic and other voters to lobby congressional offices on behalf of immigration reform. “‘I’m getting a call every minute of every day against it,’ he (McCain) said. ‘We need to get your people to speak up,'” the bishop said of the exchange.

McCain believed in American principles — such as hard work, cooperation and protecting human dignity — and that sharing those with the world made the world safer.

“He was a tough competitor, but he also understood that we cannot achieve success (global stability) by ourselves,” Bishop Kicanas said.

“We shared a concern about many of the areas of challenge around the world,” the bishop said.

McCain’s efforts, especially in his latter years, to bridge partisanship on important issues such as campaign finance reform, are examples of how much he valued a united drive to achieve a greater good. “He believed we could work together even though we have our differences.”

“He believed in coming together to discuss our differences. In that way, he was very much like Pope Francis,” Bishop Kicanas added. “That’s a message that’s important for all of us to heed.”

In 2013, the bishop attended an interfaith forum on immigration reform at the United Methodist Church in Casa Grande, Arizona.

“The religious voice has an important role on immigration reform,” Bishop Kicanas said at that forum. “This is the time to move forward as a nation … attentive to the dignity of all human life.”

McCain said at that time that about 70 percent of Arizona residents supported immigration reform for more than 11 million undocumented immigrants.

“We insist on a path to citizenship,” he said. “There are economic benefits. It’s a 10-year plan for a green card; it’s not amnesty.”

However, attempts for immigration reform that year also were unsuccessful.

“John McCain is an American hero who served his country with the utmost admiration in both the Navy and the U.S. Senate. His patriotism and dedicated service will long be remembered for generations to come,” the conference said.

“Although he will be remembered by all Americans, we are fortunate as Arizonans that we can call Sen. McCain one of our own.

“As we approach the upcoming memorial services this week, we will continue to pray for the repose of his soul and that his entire family receive the graces they need in this difficult time,” it said.

Brown is managing editor of Catholic Outlook, newspaper of the Diocese of Tucson.