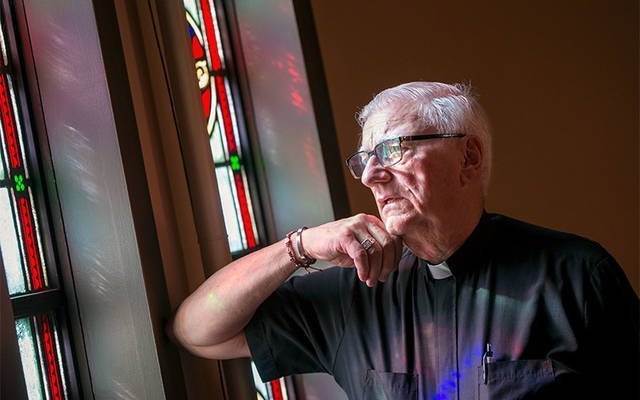 Father Edward Palumbos’ 46-year priesthood has been marked by an energetic style — and he plans to stay in high gear after becoming a senior priest in June. In fact, his calendar for the ensuing months is already filled with extensive travel plans as well as chaplaincy opportunities.

“I’m not retiring from priesthood. I’m just stepping back from administration and leadership responsibility,” said Father Palumbos, whose pastorates at Church of the Assumption and Church of the Resurrection, both in Fairport, will soon conclude.

Father Palumbos, 72, is a native of St. Cecilia Parish in Irondequoit. He attended St. Andrew’s and St. Bernard’s seminaries and was ordained March 24, 1972, by Bishop Joseph L. Hogan at Greece’s St. Charles Borromeo Church. He served as assistant pastor at Auburn’s St. Alphonsus Parish from 1972-76, diocesan executive priest for Worldwide Marriage Encounter from 1976-79, and assistant pastor at Rochester’s Church of the Annunciation from 1979-80.

From there, Father Palumbos became copastor of Henrietta’s Good Shepherd Parish from 1980-87 and its pastor from 1987-92. He then returned to St. Charles Borromeo, where he was pastor from 1992-2001. He has spent the past 17 years leading Church of the Assumption, adding the pastorate at Church of the Resurrection in 2014. In addition, he was diocesan director of priest personnel from 2010-16. He also has served on numerous diocesan and community boards and councils.

Father Palumbos has thrived on creative approaches to strengthen his parishes. For instance, he’s led Church of the Assumption in becoming a model for video-technology innovation; he noted that its live-streamed Sunday Masses are viewed by nearly 300 folks who cannot get to church.

Another highlight of his priesthood is seeing the successes resulting from his empowerment of others — “helping them realize their own gifts. I love holding a mirror to the community so it can see its potential,” he said.

After a few months of travel beginning in the late summer — including a trip to France and visiting family members in several states — Father Palumbos will settle in as priest-in-residence at St. Mary Church in downtown Rochester. He also is considering part-time hospital chaplaincy as well as increasing his involvement with the St. Joseph’s Neighborhood Center health ministry.