Review: 'Kin' is a gritty, but intriguing crime thriller with an overlay of science fiction - Catholic Courier 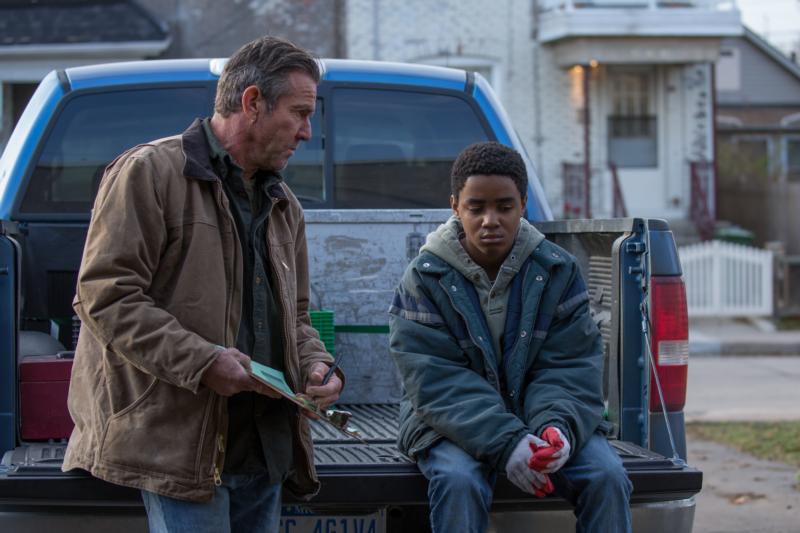 Dennis Quaid and Myles Truitt star in a scene from the movie "Kin." (CNS photo by Lionsgate)

NEW YORK (CNS) — As scripted by Daniel Casey and directed by brothers Jonathan and Josh Baker, “Kin” (Summit), a gritty but somewhat intriguing crime thriller with an overlay of science fiction, explores shades of right and wrong via a road trip through seamy swaths of Rust Belt and rural America. It’s a thoughtful film but one that can only be endorsed for a minority of grown-ups.

In expanding their 2014 short “Bag Man” into their feature debut, the Bakers focus on adoptive siblings Jimmy (Jack Reynor) and Eli (Myles Truitt) Solinski. Sketchy but likable petty thief Jimmy arrives home from a stint in prison to find that Taylor Balik (James Franco), the half-crazed head of the gang that protected him in jail, wants to be paid the $60,000 he’s owed for that service immediately.

A violent confrontation with tragic consequences follows, after which Jimmy goes on the lam with 14-year-old African-American Eli in tow and a vengeful Taylor in hot pursuit. Unbeknownst to Jimmy, however, Eli has accidentally acquired an alien firearm of tremendous destructive force, and the two are also being chased by a pair of extraterrestrials who want the weapon back.

Along the path of their journey from bleak Detroit to the promising shores of Lake Tahoe, Eli’s fragile goodness is not only contrasted with but put to the test by the ethical ambiguities that keep getting Jimmy in trouble. Will Jimmy seduce Eli into a life of playing it fast and loose with the rules? Or will Eli’s innocence have a reforming effect on Jimmy?

Reinforcing Eli in his struggle are the friendly and maternal instincts of Milly (Zoe Kravitz), a goodhearted stripper the fugitives meet up with in their travels, and the certainties previously laid down for him by the lads’ strict working-class dad, Hal (Dennis Quaid).

Though circumstances keep him in the background of the narrative, Hal remains the movie’s unwavering moral compass. And, as glimpsed by the audience, a crucifix hanging on the dining room wall of the family home suggests that Hal takes his devotion to traditional mores from his (presumably Polish-American) Catholic heritage.

Besides ethical issues, the screenplay also deals subtly with racial themes, especially toward a wrap-up that sees Eli interacting both with the intergalactic travelers and the police. There’s a hint of Wakanda about the former, a touch of over-militarization among the latter, so that Eli’s dignity is, by turns, affirmed and challenged.

Despite improbable plot developments here and there, “Kin” gets along on the appeal of the bonds binding both its upright and shady characters. But, as typified by a sequence during which Jimmy and Eli spend a long evening in Milly’s workplace, this is by no means a slice-of-life for everyone — even if the fundamental values underlying the proceedings are sound ones.

The film contains strong but bloodless violence, including gunplay and a beating, partial nudity in a strip club, at least one rough term, frequent crude and occasional crass language and an obscene gesture. The Catholic News Service classification is L — limited adult audience, films whose problematic content many adults would find troubling. The Motion Picture Association of America rating is PG-13 — parents strongly cautioned. Some material may be inappropriate for children under 13.