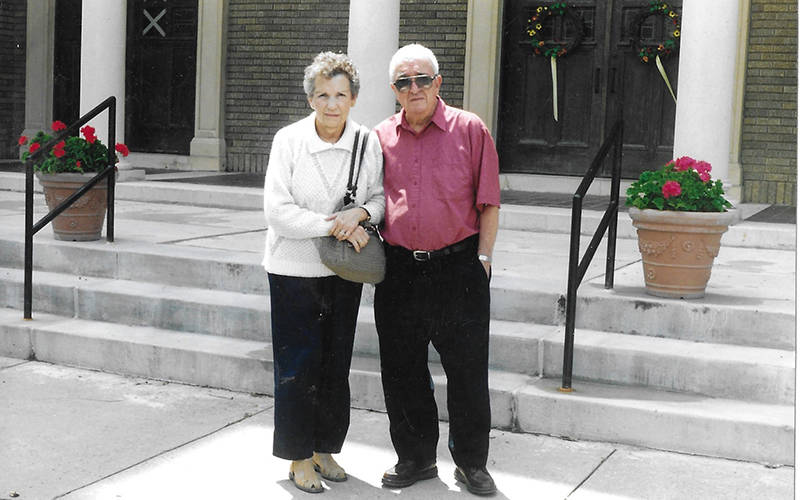 Mike Latona's parents, Ruth and Pat Latona, on the front steps of the former St. Andrew Church in Rochester on their 50th wedding anniversary on June 26, 2004. (Courier photo by Mike Latona)

One afternoon last month, after dropping a family member off for a doctor appointment, I took a little drive around northeast Rochester that became a trip down memory lane.

Near the west end of Norton Street is an industrial park where Silver Stadium once stood and where I enjoyed hundreds of Rochester Red Wing baseball games. I also passed by several Catholic churches — some of which remain open and some which have closed, such as the former St. Bridget on Mark Street, where my godfather, Chuck Dispenza, served as deacon; and St. Andrew on Portland Avenue, where my parents’ wedding took place and I took Mom and Dad for a visit on their 50th anniversary in June 2004.

On Furlong Street, I tracked down the house where my grandmother lived with my aunt and uncle, right next door to another aunt and uncle and six cousins. (Can you tell my ancestry is Italian?) Around the corner, on Portland, is the storefront that housed Sweetheart Bakery for many years under its always-smiling proprietor, Tony Delvecchio.

That’s a bunch of nice memories packed into a few blocks. I ended my jaunt filled with nostalgia and, admittedly, a touch of melancholy. Ah, if only time could stand still!

Then again, a couple of weekends later I attended two weddings and a family party, met four pals for dinner for the first time since before the COVID-19 pandemic, and watched my daughter’s soccer tournament.

Sure, I miss the good old days, but as Billy Joel notes in his song “Keeping the Faith”:

And tomorrow ain’t as bad as it seems.

Indeed. I feel blessed that God gives me the opportunity to make new memories that I’ll someday cherish, right along with these other ones.