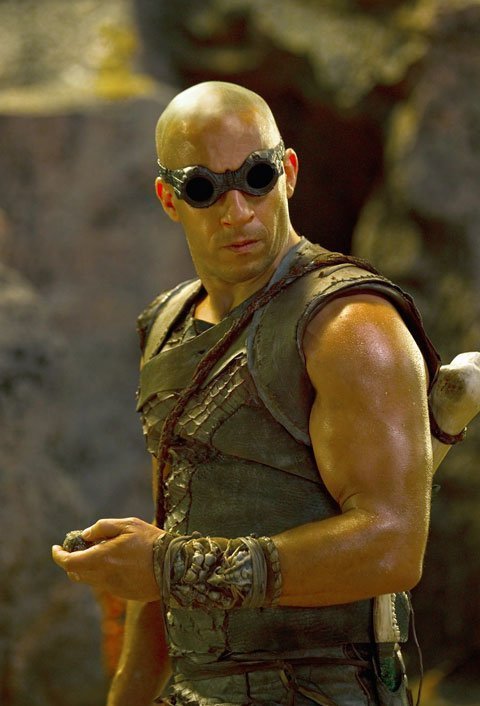 NEW YORK (CNS) — Viewers intent on enjoying the brooding, bloody sci-fi action sequel "Riddick" (Universal) will need to find entertainment value in at least some of the following: Vin Diesel as the titular character resets his own dislocated leg. Later, he self-cauterizes a life-threatening chest wound with a handful of molten lava. At still another point, he gets inside an adversary’s head — quite literally — by chopping the guy’s skull in half, horizontally, with a sword.

Riddick’s reward for that last achievement is an invitation to casual sex from a character who has previously identified herself, on more than one occasion, as a lesbian. Our reward, apparently, is an anatomy lesson by way of the cross-section glimpse we’re given of the dispatched enemy’s gray matter.

As those details suggest, the moral universe of writer-director David Twohy’s follow-up to his two previous entries in this saga — 2000’s "Pitch Black" and 2004’s "The Chronicles of Riddick" — is unrelievedly bleak. And its ethical landscape is made all the more barren by the knuckleheaded machismo to which almost everyone on screen subscribes.

Kill creatively, the take-away seems to be, and you’ll go to bed with the prom queen, even if she claims not to like boys.

The setting for all this suffering, aggression and muddled thinking is a desert planet infested with deadly animal predators. Riddick — an escaped convict with a fearsome reputation as a killing machine — was lured there under the false pretense that he was being transported back to his native world, a corner of the cosmos to which, so we’re vaguely informed, he longs to return. (Why exactly? Only the fanboys know for sure).

Riddick was then abandoned and left for dead by those who had double-crossed him.

His only chance of escape, it develops, is to summon, and then defeat, space-travelling bounty hunters whose reward will be doubled if they bring him in dead. Should he prevail, Riddick plans to use his vanquished opponents’ craft to flee. He gets even more than he bargained for, though, when two rival teams of trackers show up to claim his scalp.

One is led by an odious mercenary called Santana (Jordi Molla), the other by a slightly more restrained, and efficient, figure named Boss Johns (Matt Nable). Between them, Santana and Johns have mustered close to a dozen freebooters to sic on Riddick, including Dahl (Katee Sackhoff) a brawling Amazon with the wayward inclinations cited above.

Unimpressed and unflustered, Riddick sets about picking off the newcomers one by one.

Amid the mayhem that follows, the forces of civilization are only feebly represented by Luna (Nolan Gerard Funk) a youthful member of Santana’s crew. His humane attitude and habit of quoting Scripture suggest some distant hope for better things, though the script treats his piety ambiguously.

Luna aside, the most sympathetic personality in the mix belongs to a dingo Riddick tames early on. Who was it who said there are no bad dogs, only bad owners?

The film contains excessive gory violence, a degraded view of human sexuality, a scene of aberrant sexual activity with full nudity, about a half-dozen uses of profanity and pervasive rough and crude language. The Catholic News Service classification is O — morally offensive. The Motion Picture Association of America rating is R — restricted. Under 17 requires accompanying parent or adult guardian.