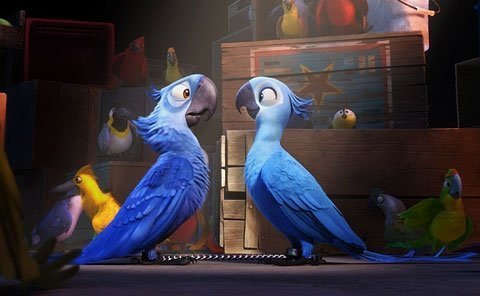 NEW YORK (CNS) — There’s not much to blame on "Rio" (Fox). Instead, praiseworthy lessons about environmental stewardship and love-inspired loyalty are decked out in kaleidoscopic colors and delivered in an overwhelmingly child-friendly tone in this animated 3-D flight of fancy.

Living as a cosseted pet in chilly Minnesota, Brazilian-born macaw Blu (voice of Jesse Eisenberg) has daily mugs of hot chocolate and — more importantly — the loving protection of his devoted owner, small bookstore proprietor Linda (voice of Leslie Mann), to keep him warm.

Blu’s jungle origins and the traumatic experience of being kidnapped by exotic bird traders — only a happy accident eventually landed him in Linda’s possession — are long past and barely remembered.

So it comes as a shock when eccentric Rio de Janeiro-based scientist Tulio (voice of Rodrigo Santoro) turns up in the North Star State to inform Linda that Blu is the last living male of his species. As such, Tulio explains, it’s imperative that Blu return to his native land, at least temporarily, to mate with his sole remaining female counterpart.

But Blu’s opposite number — fetching yet feisty Jewel (voiced by Anne Hathaway) — immediately intimidates her shy blind date and proves far more concerned with breaking out of the captivity of Tulio’s lab than with perpetuating her kind. Things only go from bad to worse when the lovebirds are suddenly nabbed (in Blu’s case, yet again) by illegal avian dealers.

Jemaine Clement’s voice work as Nigel, the elegantly odious cockatoo who aids these human villains, is one of the comic highlights of "Rio." Jake T. Austin as Fernando, a boy from the "favelas," or slums, of Rio offers, by contrast, a gentle but poignant reminder that the real life of the Brazilian capital involves more than just bikini-clad girls strolling along the beach at Ipanema.

Perhaps inevitably, director Carlos Saldanha sets the climactic scenes of his buoyant adventure — which also includes a handful of upbeat musical numbers — against the dazzling background of Rio’s legendary carnival.

In a bit of possibly excessive realism, though, this occasion is used to show off some questionable costuming choices, not least that of one minor male character who briefly dons a gold lame set of men’s underwear. His walk on the wild side — though calculated to make kids laugh — may strike some parents as a step in the wrong direction.

Otherwise, there’s just one vaguely sexual joke aimed over the heads of youngsters and a couple of allusions to bodily functions couched in terms even the members of the target demographic might acceptably use.