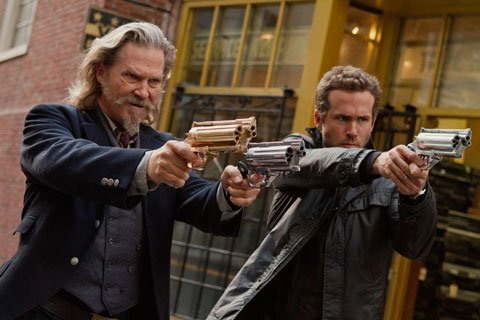 NEW YORK (CNS) — Confusion reigns in "R.I.P.D." (Universal), a scattershot action adventure that tries to be too many different kinds of movie at once, and winds up being mostly a mess.

With many of its scenes set in the afterlife, moreover, the film features a convoluted set of post-mortem rules, regulations and dynamics only some of which are compatible with Christian faith.

Director Robert Schwentke’s adaptation of Peter M. Lenkov’s series of graphic novels introduces us to Boston cop Nick Walker (Ryan Reynolds). Though fundamentally decent, Nick has recently been corrupted. Thus, we first observe him furtively burying some ill-gotten goods in his backyard in the middle of the night.

Nick’s love for his trusting wife Julia (Stephanie Szostak), however, soon inspires a change of heart, and he decides to return to the straight and narrow.

Rather ill-advisedly, Nick shares the news of his conversion with his even more crooked partner — in both crime-fighting and crime — Bobby Hayes (Kevin Bacon). Not one to let things go, it seems, Bobby uses the opportunity of a chaotic raid on a drug lord’s den to kill Nick and blame his death on the bad guys.

Waking up in the script’s version of Valhalla, Nick is given the opportunity to forestall judgment of — and, presumably, condemnation for — his misdeeds by serving on a celestial police force called the Rest in Peace Department. R.I.P.D.’s no-nonsense leader Proctor (Mary-Louise Parker) assures Nick that the organization can use a man with his skills.

Uneasily paired with crusty Wild West-era lawman Roycephus "Roy" Pulsifer (Jeff Bridges), Nick embarks on R.I.P.D.’s work of hunting down dead villains who have managed to evade divine justice by lingering on earth. Improbably, this pursuit eventually ties into — and sheds new light on — the circumstances of Nick’s own demise.

Though Bridges struggles to sustain the proceedings with amusing bravado, the multiple screenwriters’ attempt to combine a buddy movie with a special-effects extravaganza, a comedy and a redemptive romance dooms the film to attention-deficit ineffectiveness.

The image of immortality we’re offered is equally out of focus. Believers will welcome the affirmation that our moral choices in this life carry eternal consequences. But, if there is indeed an all-knowing and all-powerful God in command, how is it that the targets of Nick and Roy’s investigations — dubbed Deados — have eluded the grasp of this Hound of Heaven?

The ante-room afterworld of "R.I.P.D." can be read as a sort of purgatory. Both Nick and Roy are ethically lukewarm characters working out the legacy of their darker doings amid the pain of separation from earthly life and the dissatisfaction caused by their untimely deaths.

But the state these two temporarily inhabit might as easily be identified with the shadowy, nebulous Hades of pagan mythology. And the prospect, as raised in the dialogue, that the dead can be punished with erasure — so that they will cease to exist spiritually as well as physically — is certainly contrary to Gospel-based church teaching on the eternal nature of the human soul.

The film contains much action violence with fleeting gore, a nongraphic marital bedroom scene, brief partial nudity, occasional adult humor, a few instances of profanity, considerable crude and crass language and a couple of obscene gestures. The Catholic News Service classification is A-III — adults. The Motion Picture Association of America rating is PG-13 — parents strongly cautioned. Some material may be inappropriate for children under 13.