Rise of the Guardians - Catholic Courier 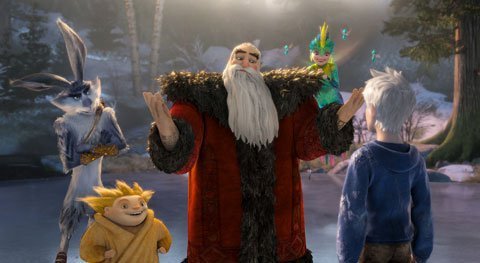 NEW YORK (CNS) — What better way to spend a few hours over the holidays than in the company, not only of Santa Claus himself, but of the Easter Bunny, the Tooth Fairy and the Sandman?

Courtesy of the delightful 3-D animated adventure "Rise of the Guardians" (Paramount), moviegoers of almost all ages can do just that.

Based on books by William Joyce, the film focuses on the destiny of the legendary bringer of winter, Jack Frost (voice of Chris Pine). Free-spirited and mischievous, youthful Jack is also lonely and uncertain of his purpose in life. Until, that is, he’s invited to join the Guardians, a force made up of the mythical characters listed above.

The Guardians’ mission is to protect children against the machinations of the Bogeyman, aka Pitch Black (voice of Jude Law).

As the initially reluctant Jack is introduced to his newfound comrades, we discover a new slant on each traditional persona. Thus Santa, alias North (voice of Alec Baldwin), is a hardy Cossack type with a heavy Russian accent, while everyone’s favorite seasonal rabbit (voice of Hugh Jackman) turns out to be a boomerang wielder from Down Under. (Parents of a certain age will recognize a play on a famous line from 1986’s "Crocodile Dundee.")

The elusive distributor of quarters under children’s pillows (voice of Isla Fisher) is portrayed as half-human, half-hummingbird. She’s at least human, and feminine, enough that Jack’s shining teeth (and, by implication, his appearance in general) set her a bit aquiver, though only in the vaguest, most innocent way. As for the chap who makes all our eyelids heavy, he’s presented as a mute but cheerful and endearing sprite.

In his feature debut, director Peter Ramsey, working from a script by David Lindsay-Abaire, pits the hope and wonder championed by the Guardians against the fear and self-doubt that arm Pitch with his most effective wiles. The result is a tenderhearted and touching family movie — one, moreover, that’s entirely free of objectionable content.

This is, though, a struggle between the battling archetypes of good and evil over the fate of the world’s children. So there are portions of the action that might be too dark and scary for the smallest members of the clan.

The film contains perilous situations. The Catholic News Service classification is A-I — general patronage. The Motion Picture Association of America rating is PG — parental guidance suggested. Some material may not be suitable for children.