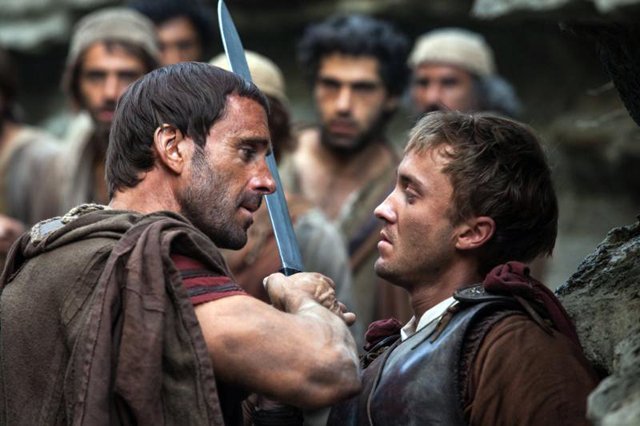 Joseph Fiennes and Tom Felton star in a scene from the movie "Risen." The Catholic News Service classification is A-III -- adults. The Motion Picture Association of America rating is PG-13 -- parents strongly cautioned. Some material may be inappropriate for children under 13.

NEW YORK (CNS) — In days of yore, Hollywood knew how to make Christian themes pay off at the box office.

Though the result was not always decorous — risque content in 1932’s "The Sign of the Cross" helped spur the formation of the National Legion of Decency — they were sometimes spectacular.

And so there arose the biblical epic, a genre which gave us such iconic spectacles as the chariot race in 1959’s "Ben-Hur" and such memorable lines as Pharaoh’s imperious order in "The Ten Commandments" (1956): "So let it be written. So let it be done."

The formula behind such films blended some of Western civilization’s most familiar narratives — scriptural literacy then being a much more widespread asset than it is today — with action sequences and, preferably, a love story. High-caliber special effects, whether they involved slave-powered sea battles or the parting of the Red Sea into towering walls of water, were another purely secular draw.

It’s a recipe few were cooking up in the last third of the 20th century, however. By the 1960s, "Don’t bring me down with your Bible, man" might have been the feared reaction to the serving up of such an old-fashioned cinematic dish.

Some have tried their hand at recombining the ingredients in more recent years. Yet the cultural gulf opened up by the decline of faith has made for a peculiar sort of revisionism. Witness the anti-human environmentalism of Darren Aronofsky’s "Noah" from 2014. Hardly the life-affirming tale of divine mercy most readers have found in those passages of Genesis.

Avoiding alienation from the sacred source material without, on the other hand, declining into a lazy stance of believers-versus-the-world piety can be a tricky business. But the makers of the Resurrection-themed drama "Risen" (Columbia) have pulled it off to splendid effect.

Where Ryder, an artist, is impeded by his pleasure-loving sophistication, Clavius (Joseph Fiennes), the Roman tribune at the heart of "Risen," is too battle-weary and blood-soaked to entertain any easy hopes for the world. So the execution of Jesus (Cliff Curtis), which he witnesses almost accidentally, makes little impression on him.

Similarly, when his superior and patron, Pontius Pilate (Peter Firth), orders Clavius, a few days later, to investigate the disappearance of the crucified man’s body, it strikes the jaded officer as just one more task in the endless work of maintaining Roman sovereignty over a religion-crazed populace. As Caiaphas (Stephen Greif) explains, Jesus’ fanatic followers are spreading wild rumors of his return from the dead, so physical proof is needed to contradict their crazy fable.

Assisted by Lucius (Tom Felton), an ambitious, though untested, junior officer whose major qualification for serving as Clavius’ aide-de-camp lies in the fact that he’s a family friend of Pilate’s, Clavius sets out on what he imagines will be a straightforward hunt for a corpse. Instead, of course, the pursuit turns out to have life-altering consequences for him.

Fine acting, lavish settings and the sense of humor frequently evident in Reynolds’ script all add up to an unusually effective big-screen treatment of the origins of Christianity. Fiennes is especially impressive as the solitary, combat-haunted warrior whose relentlessly practical outlook offers nonbelievers a ready path into the story of the Resurrection. And Maria Botto brings transcendent joy to the character of Mary Magdalene.

Despite grim scenes of armed conflict and crucifixion, the faith-bolstering benefits of "Risen" will likely sway the parents of mature teens in its favor.

The film contains some harsh but mostly bloodless violence and a few disturbing images. The Catholic News Service classification is A-III — adults. The Motion Picture Association of America rating is PG-13 — parents strongly cautioned. Some material may be inappropriate for children under 13.