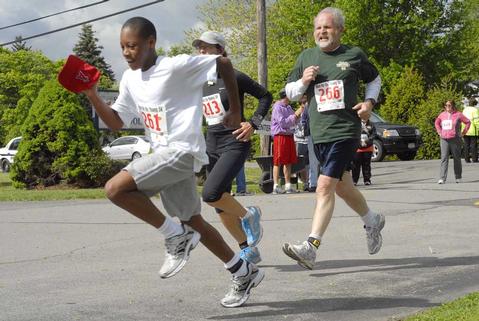 Eleven-year-old Cory Ruddock (from left), Caroline Coyle and John Welc head for the finish line of the 14th-annual Run For the Young 5K May 8 at Greece's St. Lawrence Church.

GREECE — Distance runners compete in just about all kinds of weather, so it was no surprise to see approximately 300 athletes flock to the 14th-annual Run for the Young on an extremely blustery morning.

"We never cancel," said Joanne Church, race director, "unless it’s thunder and lightning." After a pause she quipped, "Or a tornado."

Twisters may well have been on the minds of some runners on May 8, with winds steadily above 25 miles per hour and often gusting much higher. Site coordinator Donna Gray agreed with Church that past Runs for the Young have had their share of rain, but never windiness of such proportions.

Zach Miller, 21, overcame the trying conditions to complete the 5-kilometer (3.1-mile) course in 16 minutes, 20 seconds, which he said was an acceptable time under the circumstances.

"The first couple of miles the wind was pulling us along, and then I had to push a little at the end. I’ve run faster times before, but it was enough to win so that makes me happy," said Miller, who also runs for Rochester Institute of Technology where he is a mechanical-engineering student.

The resident of Lancaster, Pa., competing in his first-ever Run for the Young, was more dominant than his comments would have you believe: Miller finished a full 28 seconds ahead of second-place Mike Insler of Rochester. In fact, only six runners completed the course in less than 18 minutes.

The race course began and ended at St. Lawrence Church on North Greece Road, where it has been held every year since its inception. Winners were honored in numerous men’s and women’s age groups, as well as in the one-mile Fun Run/Walk that drew mostly child participants.

Competitors included members of Catholic parishes as well as the community at large, from serious road racers to those simply wishing to complete a 5K. Indeed, smiles seemed more plentiful at the back of the pack, as those runners rejoiced in achieving their goal of crossing the finish line regardless of how long it took.

Church described the Run for the Young as "a good family event." Several adult entrants ran with their children; others clutched their babies and toddlers upon finishing. A set of twins even competed: Ben and Becky Drexler, 15, from St. Agnes Parish in Avon.

In contrast to the run’s generally festive mood, a moment of silence was observed at the beginning for Peter Glavin, one of the Rochester area’s top distance runners of all time, who died April 23 from brain cancer. Glavin, a 1980 graduate of McQuaid Jesuit High School, was a parishioner of neighboring St. Mark Parish. His father-in-law, Deacon Jim Chatterton, currently serves at St. Lawrence.

Church, a secretary in the diocesan Department of Evangelization and Catechesis, estimated that this year’s Run for the Young will end up raising approximately $10,000. Money is derived primarily through entry fees and pledges collected by runners. Church also thanked Run for the Young’s numerous business sponsors for their support. Race proceeds will go toward financial aid for youths to attend diocesan events during the year, such as the Junior High Rally and Diocesan Youth Convention.

"Children who wouldn’t ordinarily be able to go are able to go," Church said.