As the late Archbishop Fulton J. Sheen moves another step closer to beatification, interest in the celebrated Catholic communicator remains strong outside of the Rochester Diocese.

Before taking the helm as Rochester's bishop nearly 50 years ago, Father Fulton J. Sheen was already one of the country’s most celebrated Catholics. He had taught for more than 20 years at The Catholic University of America; served for 16 years as national director of the national Society for the Propagation of the Faith; and evangelized via radio and television with his program "Life is Worth Living." Reruns of the show still appear on cable channels, drawing a new generation of fans.

Bishop Fulton J. Sheen is pictured preaching in an undated photo taken during production of his popular television program "Life is Worth Living."

Among that new generation are mother and blogger Bonnie Engstrom and her husband, Travis, of Washington, Ill., in the Diocese of Peoria, where Archbishop Sheen was ordained a priest in 1919.

"When I was pregnant with James, my husband and I started watching YouTube videos of Fulton Sheen preaching," Bonnie Engstrom said. "While watching, we were really struck by him, his intelligence and humor. We knew he was from the area we live in. Watching that, we were convinced he was going to be named an official saint of the church. We decided to name the baby I was pregnant with after Fulton."

The couple began to pray for Archbishop Sheen’s intercession to watch over their unborn child.

"We had already paired the two of them up," Bonnie Engstrom told the Catholic Courier in a telephone interview.

So it seemed natural to turn to Archbishop Sheen when the baby, James Fulton, was delivered stillborn at their home on Sept. 16, 2010.

"I have two clear memories of things," Bonnie Engstrom recalled. "I remember when my husband went to do an emergency baptism of James. I thought, ‘OK that’s good,’ because I knew that when Travis put James in my arms, he wasn’t moving. He wasn’t breathing. He was blue. His arms and legs kind of dangled."

The other thing Bonnie Engstrom remembers from James' birth was her frantic pleas to the man who had given them encouragement throughout the pregnancy.

"I remember sitting on the floor and in my head repeating Fulton Sheen’s name," she said.

After the emergency baptism, the attending midwife began performing CPR, and paramedics were called. Unable to find a pulse, they took the infant to the emergency room, where doctors were ready to pronounce him dead, Bonnie Engstrom wrote in her blog. That is when he started to breathe again on his own, even though he had gone without oxygen for 61 minutes.

Yet James Fulton is now a healthy, normal 3 1/2-half year-old who has not developed any lasting medical consequences from his crisis at birth, his mother said. The Engstrom's 6-year-old daughter, Lydia, describes her brother's birth in straightforward terms.

"She just says it as a fact: 'James was dead, and he came back to life, and it’s because Fulton Sheen prayed for him,'" Bonnie Engstrom said. "She says it like it’s a fact, like her birthday is in May." 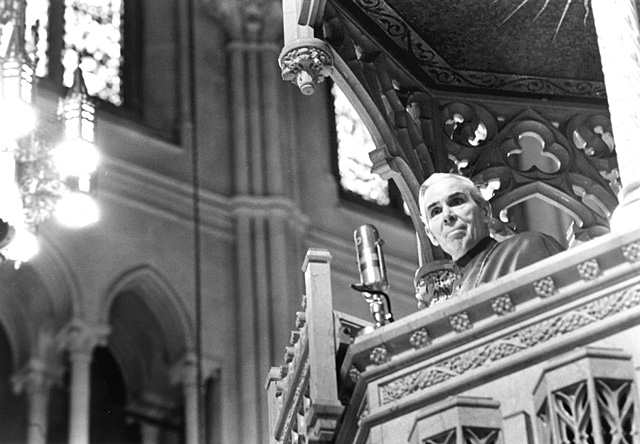 The rest of the family likewise has become accustomed to the extraordinary circumstances surrounding James' birth, Bonnie Engstrom said.

"It’s just a part of our life. Every once in a while we get to have ice cream sundaes," she said, noting this is the way the family celebrates each step forward in Archbishop Sheen’s cause for canonization.

In March, the family celebrated when medical advisers to the Congregation for the Causes of Saints agreed that there was no natural explanation for James’ recovery. In June, they again indulged with ice cream when theological advisers determined that Archbishop Sheen was the only one who could have intervened because he was the only one the Engstroms invoked.

The next stage in the process is for a group of cardinals and bishops to review the circumstances of the alleged healing and possibly send the case to Pope Francis for review. If Pope Francis were to review the circumstances and decree that God performed a miracle through Archbishop Sheen's intercession, a beatification would be scheduled, explained Msgr. Stanley Deptula, executive director of the Archbishop Fulton John Sheen Foundation, which is promoting the canonization cause. After the pope signed such a decree, a second miracle would have to be identified and investigated before Archbishop Sheen could be canonized.

"I think it’s telling that the mother’s first thought was Fulton Sheen," Msgr. Deptula said. "There was no question of intercession of other saints, and then as the crisis unfolded, she asked for his intercession." 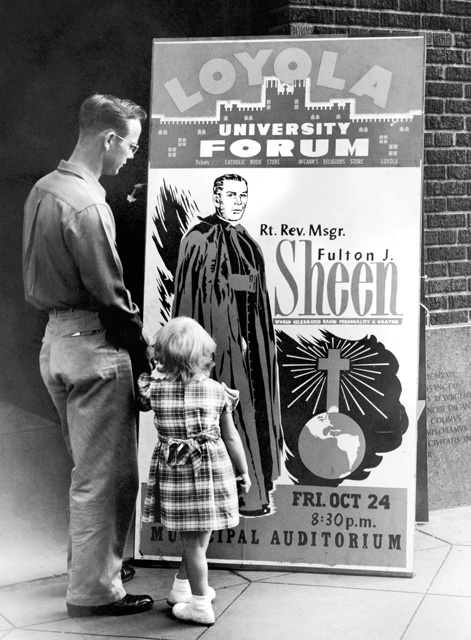 A sign advertises an appearance by Msgr. Fulton J. Sheen at Loyola University in Chicago in an undated photo.

In addition to inspiring a new generation of Catholics, Archbishop Sheen continues to attract the attention of young researchers -- including several just this year who visited the archives of the Diocese of Rochester to view his pictures, papers, books and artifacts, said Sister of Mercy Connie Derby, diocesan archivist and digital and resource librarian.

Included in the archives are the 1966 papal bull from Pope Paul appointing him Bishop of Rochester; an image of his coat of arms, which incorporates a blue field signifying his devotion to Mary; copies of correspondence and his nationally syndicated column; and several of his diaries. The archives also house his vestments, biretta, and crosier -- all of which might be considered relics if he were to be canonized a saint.

Father Mark Miller, who has been helping Sister Derby organize the diocese's holdings on Archbishop Sheen, recalled meeting the celebrated prelate several times as a seminarian and being ordained by then-Bishop Sheen in 1969.

"The moment that struck me the most was when Bishop Sheen knelt down (at the ordination) for each of us new priests to give us his blessing," Father Miller said.

The bishop met often with the diocese's seminarians and added graduate studies to the curriculum of the former St. Bernard's Seminary, the late Father Robert F. McNamara noted in his book, The Diocese of Rochester in America, 1868-1993. The former diocesan archivist also noted that Archbishop Sheen paved the way for the diocese to introduce permanent deacons in the 1980s and founded an organization that has become the affordable housing developer Bishop Sheen Ecumenical Housing Foundation. 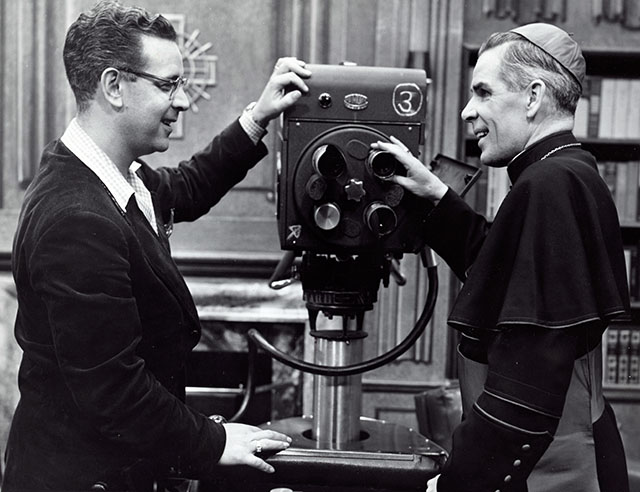 Bishop Fulton J. Sheen visits with an unidentified person during production of his popular television program "Life is Worth Living." The show ran from 1952-1957.

Sister Derby said Father McNamara regarded Bishop Sheen as a prophetic figure for his ecumenical outreach and his focus on the poor.

"Many people will say it was the manner he did (these things) that was the difficulty," Sister Derby said. "It was the how, not the what. The whole thing with St. Bridget's -- it was the how he did that that played itself out."

Sister Derby's comment relates to an incident in which Bishop Sheen announced nationally that he was donating Rochester's St. Bridget Parish to the federal government to use for affordable housing, even though he had not discussed the plan with St. Bridget's pastor or parishioners. After a massive outcry, he rescinded the offer and chose to retire early about a year later, Father McNamara wrote in his book. After leaving Rochester, he was named titular Archbishop of Newport, Wales, in 1969.

In his book, Father McNamara wrote that Archbishop Sheen's rapid exit should not overshadow his spiritual legacy to the diocese. 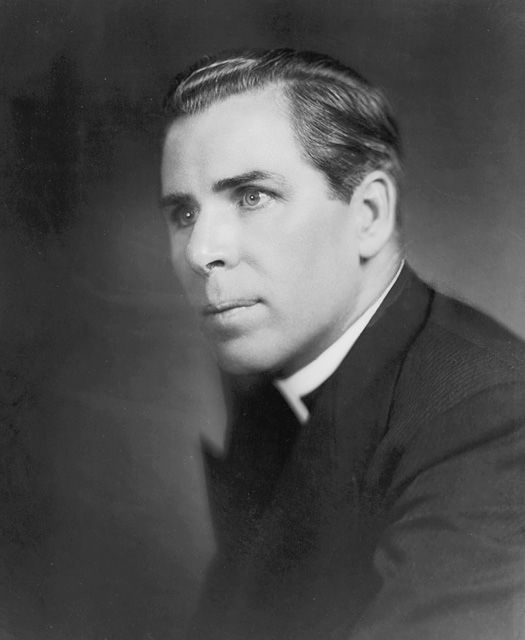 Father Fulton J. Sheen is pictured around the time of his ordination as a priest in the Diocese of Peoria.

"The people of the Diocese of Rochester should not forget the honor that is theirs in just having had Fulton J. Sheen as their bishop, however briefly," Father McNamara wrote. "He was certainly an outstanding figure in American Catholic history. Furthermore, he was a thoroughly good and dedicated priest. If he became a national celebrity, with all the temptations to pride that the celebrity status suggests, he countered vainglory by his humble devotion to the cross of Christ, by his daily hour before the Blessed Sacrament, by his childlike affection for the Mother of God, and by his all-embracing charity."

"I can understand that the older clergy might have mixed feelings," Msgr. Deptula said. "It was a busy couple of years. (Archbishop) Sheen was more of a bishop that did implement the Second Vatican Council... (T)hey were complex times for our country."

Still, Archbishop Sheen will always be known as an extraordinary evangelist, drawing a large non-Catholic fan base, he noted.

"He certainly had the best intentions in mind," Msgr. Deptula said.

Bonnie Engstrom likewise has found herself evangelizing by sharing the story of James Fulton's birth. Participating in the case for Archbishop Sheen's canonization also has been an eye-opening experience for her and her family, she said.

Bishop Fulton J. Sheen speaks during production of his popular television program "Life is Worth Living" in 1953.

"My husband and I have seen how serious the church is about the truth and finding the truth," she said.

A few days after James Fulton's birth, her family sought their own truth, sending the afterbirth to the hospital to determine why an otherwise routine pregnancy had gone so horribly wrong. The hospital soon determined the cause: There had been a knot in the umbilical cord that tightened during the birth, cutting off the infant's oxygen supply.

Thus, Bonnie Engstrom named her blog about Catholic marriage "A Knotted Life" -- both as a play on the theme of tying the knot, and a nod to her longstanding devotion to the icon of Mary, Undoer of Knots.

She said she was devoted to this image of Mary long before a knot was discovered in her son’s umbilical cord -- and long before her family's lives became tied to Archbishop Sheen.

Copyright © 2014 Catholic Courier, Inc. All rights reserved. Linking is encouraged, but republishing or redistributing, including by framing or similar means, without the publisher's prior written permission is prohibited.