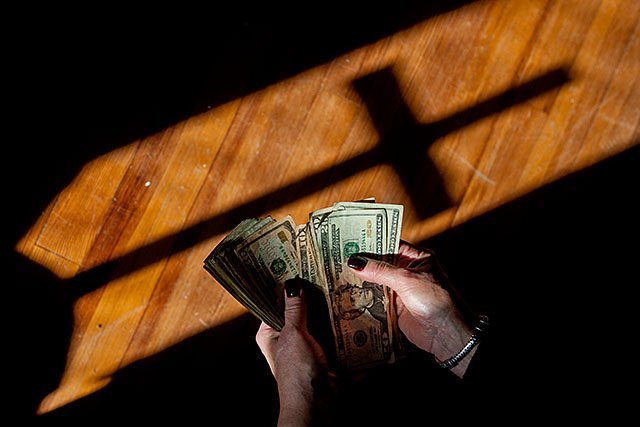 In late August, parishioners at a Rochester Catholic church were rocked by allegations that hundreds of thousands of dollars had gone missing over a period of several years.

Rochester police are investigating, and no charges related to the disappearance have yet been filed.

But the incident — combined with two other allegations of theft at diocesan parishes — has prompted the diocese to emphasize existing policies and procedures on handling parish finances and to require new training, oversight and controls.

"We are planning on retraining everybody who handles cash: ushers, pastors, counting teams, folks that are making deposits," said Father Daniel Condon, chancellor for the Diocese of Rochester.

Diocesan officials also have recommended that parishes hire regional finance directors, and nearly half of the parishes have done or will be doing so, said Lisa Passero, chief financial officer for the diocese. These finance directors are expected to help with financial oversight, strategic planning and budgeting for a single large parish or a grouping of smaller parishes.

"With the proper skill set and financial background, they would work to ensure policies and procedures are being followed and to ensure internal controls are in place," Passero said. The directors also can assist parishes with budgeting, she added.

Prompted by the recent incidents, the diocese also has emphasized that insurance might not cover fraud-related losses incurred by parishes that do not follow existing diocesan policies designed to deter fraud. Even for parishes that do follow diocesan policies but nevertheless fall victim to fraud, payments from the diocesan self-insurance pool will be limited to losses incurred in the current fiscal year and one fiscal year prior, Passero said. Therefore, parishes may not be able to recoup losses that take place over many years.

And because diocesan parishes are insured collectively, fraud-related losses at one parish can cause rates to rise for all, Father Condon explained.

"Insurers are in business to make money," he said. "They are hesitant to insure risk if they don’t know the size of (that risk)."

As another means of limiting losses, the diocese has recommended that parishes participate in the Communis Fund, a diocesan fund for long-term investments. Use of Communis funds can be easily and consistently tracked.

"This serves as an internal control, and it also serves to preserve the parish’s future sustainability," Passero said.

If the parishes that experienced fraud had invested their funds with Communis, smaller sums of money might have been accessible to perpetrators, thus reducing the magnitude of losses experienced, she noted.

Investigators are still getting a handle on the scope of those losses.

A Rochester Police Department spokeswoman told the Catholic Courier in September that the department’s Economic Crimes Unit is sifting through hundreds of pages of documents as it investigates the apparent disappearance of hundreds of thousands of dollars from St. Monica Parish in Rochester over a period of several years. No charges have been filed in this case.

In another case, charges were filed in January against Christopher Bush, the former business manager of St. Mark Parish in Greece, who was charged with third-degree grand larceny and first-degree falsifying business records for allegedly embezzling more than $38,000 from the parish, according to Greece Police. Since then, the case has been sent to a grand jury for review and is pending there. While under grand jury review, case records are not accessible to the public.

A third diocesan case of alleged grand larceny also is pending a grand jury review, and has been so for more than two years. In 2011, Father Vincent Panepinto was charged with third-degree grand larceny for allegedly stealing about $10,000 from Our Lady of the Americas Parish between Jan. 1, 2007, and Dec. 31, 2010. At the time he was charged, Father Panepinto was already on diocesan administrative leave due to an allegation of sexual abuse of a minor dating back to the 1960s.

A case from the neighboring Diocese of Buffalo also made the headlines in July, when a Sister of St. Francis of Penance and Christian Charity was sentenced for stealing money from two Orleans County churches.

Sister Mary Anne Rapp was ordered to serve 90 days in jail, complete 100 hours of community service and pay back $128,000 over five years, according to the The Daily News in Batavia. Sister Rapp was arrested following an internal audit ordered by a new pastor at the church, The Daily News reported.

Even when courts order perpetrators to make restitution, it is rare for a parish to get back a significant portion of what was taken, Passero said. Father Condon explained that people who commit fraud typically do so because of an addiction, financial pressures, or to maintain lavish lifestyles, and thus have spent the missing funds.

For that reason, the diocese has focused on preventing fraud from occurring, Passero said.

"The first thing that has to be present is an opportunity" to commit fraud, she said. "That’s what we are trying to control."

The diocesan controls for parish donations include using tamper-evident bags and rotating teams of money counters to prevent theft of loose cash. Parishes must acknowledge monetary donations of more than $250 with a letter to donors listing the amount of the donation. Parishes also are required to issue annual statements of contributions to parishioners who contribute using envelopes, checks or through electronic fund transfer. These acknowledgements enable parishioners to compare their own records against what has been recorded by the parish and raise questions if discrepancies arise.

The diocese annually conducts a full audit of its own finances and publishes its financial statements, which also are submitted for review to the Archdiocese of New York, which is the head of the church’s New York Province.

Although parishes are not required to do full-scope audits by certified public accountants, approximately every three years an external accounting firm does review their compliance with agreed-upon procedures. Parishes also are required each year to submit financial reports for review by the diocese’s internal auditor.

During its annual meeting, a parish should present its annual financial report to its finance and parish councils, and that report should be made available to parishioners.

The diocese also specifies duties — such as account reconciliations and deposits — which should be segregated from each other, so that one person isn’t handling all aspects of a parish’s finances. In the same vein, the new regional finance directors are intended to add an additional layer of financial expertise and local oversight on such financial issues as adherence to credit-card reimbursement policies, Father Condon said.

"There’s a certain level of redundancy that you want in place to ensure that funds that are donated are being appropriated to the mission of the church," he noted.

When a group of parishes was looking for a finance director a year ago, strategic planning was more of a concern than was fraud, according to Father Kevin McKenna, pastor of the Cathedral Community in Rochester.

"Although the fraud aspect of it was something we take very seriously, it wasn’t a motivating factor for us (in hiring a director of finance a year ago)," he said.

He said the parishes — the Cathedral Community, Holy Apostles, St. Monica, Emmanuel Church of the Deaf and Immaculate Conception — were looking more for a person who had expertise in helping parishes achieve financial stability.

Carol Wynne, who has experience as a parish business manager, was hired as director of finance for the parishes, and one of her jobs is to help them with strategic planning and budgeting. This fall the parishes hired as their regional business manager Mark Shevlin, who will ensure that the parishes are complying with all of the diocesan financial policies, Father McKenna said.

"It’s important for us to be as transparent as we can in terms of finances," he noted.

Transparency is a goal to which all parishes should strive, said Peter Denio, project manager for Catholic Standards for Excellence, a free program for parishes that is run by the nonprofit organization the National Leadership Roundtable on Church Management. Although some diocesan parishes may have used the Standards for Excellence in the past, Denio said the Rochester Diocese is not formally affiliated with the program.

Denio said parishes that have greater trust and greater oversight are able to more effectively carry out the mission of the church. Catholic Standards for Excellence addresses a range of issues including conflicts of interest, such human resources issues as employee evaluations and job descriptions, and standards for funds raised and donor privacy.

He said the standards cover a wide range of issues, such as: "Are we being truthful in where the money goes? How do we care for a donor’s information? What gifts can be received and should not be received?"

Denio said parishes also should segregate duties, so that those entering information into the parish books are not the same people making bank deposits.

"That should be able to mitigate somebody who is messing with the books," he remarked.

"Parishes should be creating opportunities for openness and transparency so people are informed as to what are the major decisions in a parish," Denio said.

He said Pope Francis, who has become personally involved in efforts to reform the scandal-plagued Institute of Religious Works, commonly known as the Vatican Bank, has set an example for all Catholics on the need for transparency.

"If they (Vatican officials) are willing to do it, so should we," Denio said.