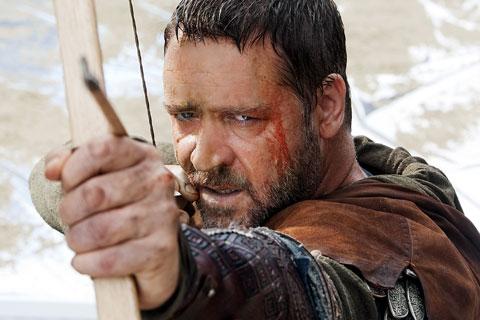 NEW YORK (CNS) — Filmmakers can have myriad reasons for revisiting stories and characters that have captivated moviegoers in the past — all of which become moot if the new work engages on its own terms. Regrettably, that’s not the case with "Robin Hood" (Universal), the latest collaboration between director Ridley Scott and star Russell Crowe.

Unlike their 2000 Oscar-winner "Gladiator," "Robin Hood" lacks energy and emotion. Despite approaching the legend from a novel angle, this enervating adventure prompts the question, "Why bother?"

Credit Scott and screenwriter Brian Helgelund for offering a serious piece concerning civil rights, set amid the mayhem and machinations of 13th-century Anglo-French politics. There’s nothing frivolous or egregious about the effort, yet the social-justice theme gets tamped down along with the swashbuckling and entertainment value.

The action begins prior to Robin Longstride (to use his Saxon surname) becoming an enemy of the crown. Toward the end of his service as an archer on King Richard the Lionheart’s (Danny Huston) decade-long Crusade, he has the temerity to criticize the monarch for slaughtering innocent Muslims. Following Richard’s death shortly thereafter, Robin deserts, returning to England with the assumed identity of a slain knight.

Together with a small cohort, he travels to Nottingham where he’s welcomed as the son of local nobleman Sir Walter Loxley (Max Von Sydow). This ruse entails posing as husband to Lady Marion (Cate Blanchett), who has been struggling to manage the family’s feudal estate despite the exorbitant taxation imposed by Richard’s doltish brother John (Oscar Isaac) and John’s scheming aid Godfrey (Mark Strong).

Since these exactions have angered landowners and further impoverished the common folk, civil war looms, so someone must stand up for all that is just and unify the realm. Robin — whose late father helped draft a human rights charter before being executed — fits the bill.

In addition to telling Robin’s back story, the key innovation is presenting Marion as the opposite of a dainty damsel. She’s a courageous fighter, quick to take up arms. Unfortunately, this feminist twist doesn’t translate into stirring action sequences; it does mute the romance, however, since there’s little time for warm sentiments amid all the political intrigue and salubrious civics lessons.

"Robin Hood" is thematically ambitious at the expense of excitement. And any assumption that its production values would be relatively superior to past versions proves incorrect; both tone and texture are disappointingly flat.

Given the historical context, Catholic viewers are unlikely to be offended by jabs at the coldhearted, oppressive church leaders of the period. So too, Friar Tuck’s (Mark Addy) taste for brewing and imbibing mead offers little cause for distress.

Overall, though it hovers on the edge of bawdiness, and despite the elements listed below, "Robin Hood" may be acceptable for some mature teenagers.

The film contains much — mostly bloodless — battle violence, a nongraphic sexual situation with fleeting rear nudity, an attempted rape, callous clergy, some innuendo and anatomical references and one instance each of crude and crass language. The Catholic News Service classification is A-III — adults. The Motion Picture Association of America rating is PG-13 — parents strongly cautioned. Some material may be inappropriate for children under 13.