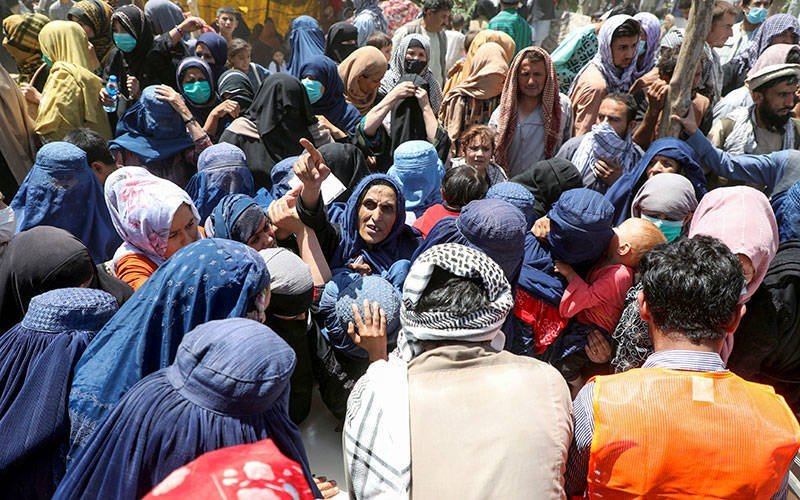 Internally displaced families from northern provinces of Afghanistan, who fled from their homes due the fighting between Taliban and Afghan security forces, take shelter at a public park in Kabul Aug. 10. (CNS photo by Reuters)

The Aug. 15 fall of Kabul, Afghanistan’s capital city, to Taliban forces only intensified the work Catholic Family Center’s staff members and volunteers already were doing to provide safe, welcoming environments for refugees from the war-torn country. The current situation in Afghanistan has prompted the agency to prepare a list of ways individuals in the community can help with these efforts.

Over the past 35 years, the Rochester-based agency and its partners have resettled more than 15,000 refugees, including 209 in 2019. The agency was preparing for an uptick in its case load this year due to a recent increase in the annual number of refugees allowed to enter the United States, according to Lauren Frye, Catholic Family Center’s refugee program coordinator. The influx of refugees, especially from Afghanistan, has started a little sooner than the agency expected, she added.

“I was at the airport at midnight on Saturday with a family of eight, and we had some come in last night,” Frye told the Catholic Courier Aug. 20.

Rochester is one of just 25 cities authorized to resettle refugees who come to the United States through the State Department’s Special Immigration Visa program, which is available to people who worked with the U.S. Armed Forces or embassy as translators or interpreters in Afghanistan or Iraq. While the agency does receive some government funding for these resettlement efforts, those funds usually are used to pay for a refugee family’s security deposit, first month’s rent and other necessary costs. Catholic Family Center’s resettlement team also makes sure each family’s apartment is stocked with an initial supply of food, cleaning supplies and other necessities.

“The people coming are extremely traumatized. Having a fan makes a huge difference. So does not having to worry about where to get paper towels while people are still acclimating to using a kitchen, using a toilet,” Frye said.

Those who want to support the refugees but can’t deliver items to the office may order items from the agency’s wish list on Amazon or make a monetary donation at HelpCFC.com. Online donors will be given the option of directing their donations to Catholic Family Center’s Refugee Resettlement and Immigration programs. Donations also may be mailed to Catholic Family Center, Attn: Fund Development, 87 N. Clinton Ave., Rochester, NY 14604.

Individuals who are unable to donate funds or items can make a difference in refugees’ lives simply by being friendly and welcoming toward them, even if the refugees speak a different language, Frye said.

“That goes so far, because these people are scared and they don’t know who to trust,” she said.