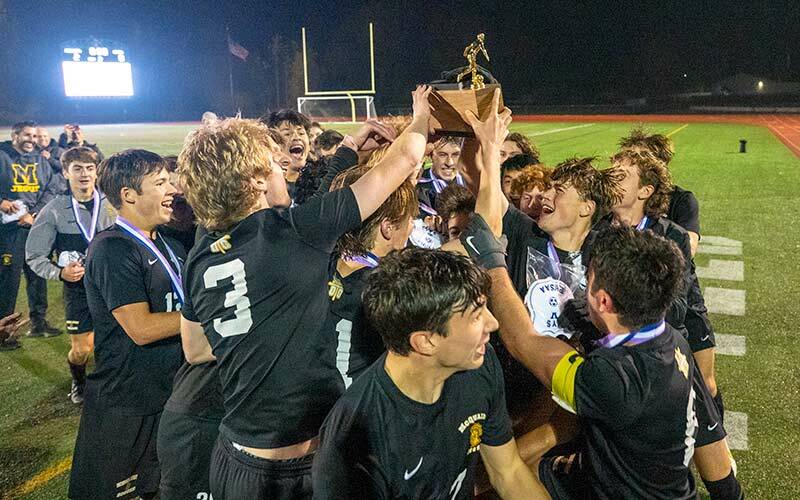 The thrill of a championship win is typically reserved for only a select few.

Lately, however, Catholic high schools in the diocese have made such mountaintop moments seem rather routine.

At Our Lady of Mercy, girls’ titles were earned by the volleyball team, which reigned in Section 5 Class A2; and the golf squad, which placed first in its Section 5 tournament.

In addition, individual titles were claimed by athletes from McQuaid cross-country as well as Mercy’s golf, tennis and swimming squads.

McQuaid, seeded No. 1 in Class AA, secured the Section 5 crown with a 2-0 win over No. 6 Brighton in the Class AA final held Nov. 1. Dillon Bucci and Kevin Miller were the Knights’ goal-scorers, and goalkeeper Niyen Ruffin recorded the shutout.

The Knights had reached the sectional final by winning 7-0 over No. 8 WOIS/Edison/Franklin/SOTA in quarterfinal play Oct. 22; and 2-1 over No. 4 Hilton in semifinal action Oct. 27 as Casey Montesano and Colin Shanahan each scored.

Following their sectional win, the Knights recorded a 2-1 victory over Clarence of Section 6 in state quarterfinal play Nov. 5 as Andrew O’Neill and Bucci scored. Next up was a 3-0 decision over Connetquot of Section 11 in semifinal action Nov. 12, thanks to goals from O’Neill, Montesano and Trey Leo.

However, McQuaid’s bid for a state title was halted by Scarsdale of Section 1, 2-0, in the state-championship contest Nov. 13. The Knights allowed one goal in each half as they ended their 2022 season with record of 18-1-2.

The Knights captured their fourth straight Section 5 crown with a 37-14 win over No. 4 Pittsford in the Class AA final Nov. 11. McQuaid, seeded No.3, scored all 23 of the game’s second-half points to run away from a 14-14 halftime tie. Leading the way was running back John Harding, who piled up 229 yards and four touchdowns on 30 carries.

McQuaid had reached the final by winning 49-21 over No. 6 Rush-Henrietta in quarterfinal play Oct. 28, as Harding ran for three touchdowns and also had a TD reception; and then scoring a 20-7 semifinal victory over No. 2 Victor Nov. 4, avenging a 21-7 regular-season loss to the Blue Devils two weeks earlier.

In state Class AA quarterfinal play Nov. 21, the Knights went out to a 14-0 halftime lead over Buffalo Bennett on a TD run by Harding and a scoring pass from Will DiMarco to Gavin Brownlie. But Bennett, a Section 6 school, racked up 20 unanswered points in the second half to end McQuaid’s season, 20-14. The Knights’ final record was 9-3.

The Knights brought home a Section 5 title Nov. 5, scoring 47 points to best runner-up Pittsford Mendon’s 56 total in Class B. McQuaid was led by Collin Brown, who placed first individually with a time of 16 minutes, 15 seconds on the Letchworth State Park course. Brown’s winning finish was 8.2 seconds ahead of second-place Colin Burke of Mendon.

Brown went on to capture third place at the state Class B championship meet Nov. 12, running the Vernon-Verona-Sherrill High School course in Oneida County in 16:47.7. Canfield added a 26th-place finish in that race.

The Monarchs, seeded No. 2 in Section 5 Class A2, gained the sectional crown by taking down top-seeded Pittsford Sutherland Nov. 4. Mercy pulled off the upset with a sweep of the best-of-five match, by scores of 25-10, 26-24 and 25-23.

Zigrossi shot a 1-over-par 74 — including a 1-under-par 35 on the back nine — for her third consecutive individual sectional crown. She was joined by Monarch teammates Sophia Cellura (87, fourth place), Marisa Eichas (93, sixth) and Olivia Zito (94, seventh) in claiming the team championship. Mercy’s combined four-golfer score of 348 placed the Monarchs well ahead of second-place Rush-Henrietta’s 406 total.

By finishing in the top nine individually at sectionals, Zigrossi, Cellura, Eichas and Zito have all qualified for state-tournament play this coming June. They will be joined by Mercy teammate Lauren Garsin, who tied for ninth in the sectional tournament and then won in a playoff for the final state spot.

Top-seeded Bishop Kearney/Chesterton won its Section 5 Class B2 title in thrilling fashion, scoring a 2-1 overtime victory over No. 2 Penn Yan Oct. 29. Josh Baraka netted the winning goal in OT, and Joey Triassi had the Kings’ other goal as their team bounced back from an early 1-0 deficit.

The title-game appearance was preceded by a 4-0 quarterfinal victory over ninth-seeded Haverling Oct. 22 as Triassi scored twice while Jaiden Insixiengmay and Christian Maniscalco added a goal apiece; and a 3-0 semifinal win over No. 5 Le Roy Oct. 26 with Maniscalco, Triassi and Oscar Simms all scoring.

The Kings’ championship season was brought to a close Nov. 2 with a 2-0 loss to Livonia in state Class B qualifier action. Their final record was 16-2-1.

More highlights from other teams and individual athletes

• In girls’ tennis, Mercy’s Caroline Fitzsimmons and Ava Hartzell won two close matches in earning the Section 5 Class A2 doubles championship Oct. 8. They scored a 7-6 (7-5), 6-4 semifinal win over Pittsford Mendon’s Jenny Zhao and Jessica Yao in semifinal play, then earned a 5-7, 7-5, 7-6 (7-5) victory over the Pittsford Sutherland duo of Shushu Wu and Michelle Han in the sectional final.

• Aquinas girls’ soccer reached the Section 5 Class B1 final as a No. 6 seed. The Little Irish won 4-1 over No. 3 Greece Olympia in quarterfinal play Oct. 21 behind goals from Hanna Fenton, Emily Silverstein, Bella Muratore and Juliana Shannon; then blanked No. 2 Batavia, 3-0, in semifinal action Oct. 25 as Silverstein scored twice, Mya Kotsch scored once and Kate Sproul made six saves for the shutout. AQ’s season ended with a 1-0 overtime loss to No. 1 Palmyra-Macedon in the title game Oct. 28. The team’s final record was 8-9-2.

• In girls’ swimming, Mercy featured three event champions at the Section 5 Class B meet Nov. 5. Topping the Monarchs was Elli Knausz, who won the 200-yard individual medley and 100 butterfly and also was on the Monarchs’ first-place 200 medley relay. Other relay members were Erin Galligan, Alise Sheehan and Madeleine Ritter. The winning finishes helped the Monarchs place third in team scoring.

• Aquinas’ Emily Ferguson placed second at the Section 5 golf tournament Oct. 15. Her 9-over-par total of 82, which was only bested by Zigrossi’s winning score, enabled her to join the five Mercy golfers at the state tournament next June.