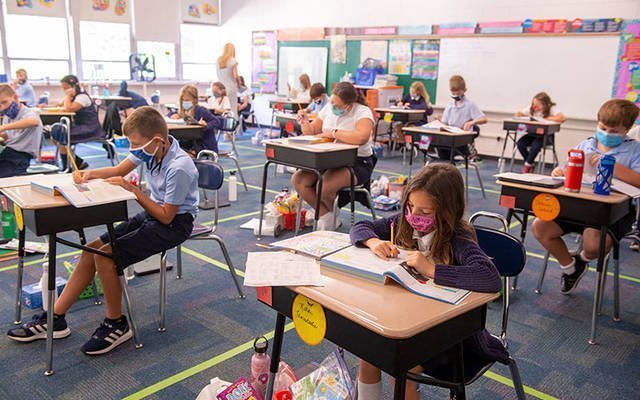 These three elements, while always important in a school setting, have become absolutely critical in recent weeks as educators, students and parents alike adapt to a “new normal,” according to local Catholic educators.

“I think the most important thing is just for everyone to remember we are all navigating all of this newness at the same time, and patience is really the key,” remarked Maria Cahill, principal at St. Pius Tenth School in Chili, which re-opened Sept. 9.

The first day of the new school year marked the first time many of the students had set foot inside a classroom in nearly six months, as the pandemic caused by COVID-19 forced schools throughout the state to close their buildings and switch to online learning last March. Teachers and administrators spent much of the summer devising ways to educate students while keeping them safe and meeting new state guidelines, and it appears that their hard work has paid off, according to James Tauzel, superintendent of the Diocese of Rochester‘s Catholic schools.

“As I’ve visited schools since reopening, I’ve been moved with the peaceful, happy and comfortable mood of the students. We carried so much worry throughout the preparation process, but it has all turned to joy with the return of students to our buildings,” Tauzel said Sept. 15.

“I am so pleasantly surprised,” Cahill agreed. “The anticipation was worse than anything, and the kids have adapted so incredibly well. They are doing a great job with all of the new protocols.”

Those new protocols vary from school to school, but in each building include wearing masks, washing hands frequently and maintaining a safe physical distance from other students. Most students have adjusted very well to wearing masks for at least part of the school day, noted Paula Smith, principal at Elmira’s Holy Family Catholic School. The Elmira school, which opened Sept. 10, has provided plastic barriers that can be used when students are sitting at their desks.

“They can put their mask down when the teacher is doing instruction if their barrier is up,” Smith explained.

“So many of them are just so grateful to be together again that they don’t even think of the masks or the extra hand-washing or any of those things as a nuisance,” Marvin said. “Honestly, other than the safety protocols, it’s like school is normal. It’s been wonderful to be able to kind of feel that normalcy again.”

The changes that have been hardest to get used to, Marvin opined, are those related to things the school community previously took for granted, such as the ability to gather the entire student body together for prayer at the start of each day. The school community still prays together each morning, but now each class does so from its own classroom while prayers are read over the intercom system, she said.

In previous years, parents frequently went inside the school to drop off their children, talk to faculty or staff, or even just to see their children’s classrooms, Marvin said. In an effort to keep the “circles of contact” as small as possible this year, however, parents are not allowed to enter the building except under very narrow circumstances, she said.

Although educators spent weeks developing protocol that worked on paper, occasionally some of those procedures needed tweaking once they’re actually put into practice, Smith said. After the first day of school, for example, faculty members at Holy Family knew what elements of the school’s new dismissal procedure could be modified to make it more efficient, she said.

“Things need tweaking, but we’re getting on top of them really quickly and everybody is brainstorming,” Smith said. “As a team we come up with a new plan that makes it work.”

Smith regularly communicates these changes to parents, who so far seem willing to adapt as long as they’re kept abreast of new developments. Smith makes a point of responding to questions from faculty and parents alike, even if she does not yet have an answer.

“They have been really responsive to that, as long as I communicate with them. They all know this year is going to be different, and they’re all approaching it with such a positive attitude, saying, ‘We can do this. We can make this work,’” Smith said.