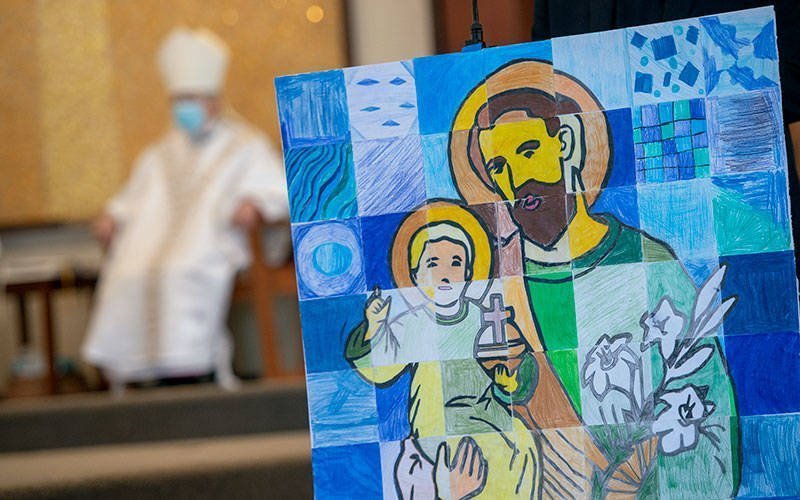 During a St. Joseph’s Day Mass at St. Joseph Church in Penfield March 19, Bishop Salvatore R. Matano is seen behind an image of the saint that was created by students at St. Joseph School. (Courier photo by Jeff Witherow)

Students at All Saints Academy in Corning recently spent several weeks getting to know St. Joseph.

Younger students colored pictures of Joseph, older students composed their own prayers to St. Joseph, and students in all grades learned more about the saint’s life in their classrooms and during school Masses.

The experience was eye-opening for students, who had known who St. Joseph was on a surface level but in many cases had never spent much time learning or reflecting about his role in Jesus’ life, noted Mary Ann Lacey, principal at All Saints.

“I don’t think the students thought about his role as a father before. They have been focused on the fact that Jesus is God’s son. I think it has been a great learning experience,” Lacey said.

There has been a renewed emphasis on learning about and praying to St. Joseph at Catholic schools throughout the Diocese of Rochester since December 2020, when Pope Francis launched a worldwide Year of St. Joseph. Diocesan staff composed a “St. Joseph Prayer for Children,” which was approved by Bishop Salvatore R. Matano, according to James Tauzel, superintendent of diocesan schools. Prayer cards containing this prayer were created and distributed — both digitally and physically — to schools throughout the diocese.

Students at these schools began reciting the prayer daily during Catholic Schools Week in late January and will continue to do so throughout the spring, Tauzel said.

“Reciting this prayer daily teaches all of us about St. Joseph’s life as a humble servant to God and protector to his family and the world,” added Christine Deutsch, principal at St. Ambrose Academy in Rochester. “We ask God to help us work with patience and perseverance just as St. Joseph did. We ask St. Joseph to protect us as he protected Mary and Jesus.”

The diocesan Catholic Schools Office also put together a virtual retreat for families to do together to grow closer to St. Joseph, Tauzel said. Separate versions of the retreat for primary, elementary and middle-school grades use age-appropriate videos, prayers, recipes, and coloring and activity pages to help children learn more about St. Joseph and understand his significance in the Catholic faith.

The pope’s declaration of a Year of St. Joseph coincided nicely with plans that had already been underway at St. Ambrose Academy, Deutsch said. Last spring, the Ladies Auxiliary of Rochester’s Peace of Christ Parish donated statues of St. Joseph for each of the school’s classrooms, and the statues were scheduled to be blessed during Mass on St. Joseph’s March 19 feast day. After the Mass, a St. Joseph’s Table was supposed to be set up for students in the school gymnasium, but neither of those two things happened, Deutsch said.

“The pandemic closed us right before that week. Everything was planned but … we closed school the Monday before,” she said.

Students from St. Francis-St. Stephen School in Geneva and St. Michael School in Penn Yan also will enjoy meatless foods and pray at altars dedicated to St. Joseph when their schools host St. Joseph’s Tables on March 19. St. Francis-St. Stephen School students also will attend Mass March 19. Sixth-grade students from St. Joseph School in Penfield will be present when Bishop Matano celebrates Mass at St. Joseph Church that day, and the rest of the students will watch the livestreamed Mass from the school.

Schools throughout the diocese have found a variety of creative ways to help their students learn more and develop an appreciation for St. Joseph, Tauzel said. Around Valentine’s Day, for example, students at Holy Cross School in Charlotte listed St. Joseph’s qualities and traits on construction-paper hearts and posted the hearts on a large bulletin board under the heading, “Discover the heart of St. Joseph.” And at St. Mary School in Canandaigua, students who exhibited St. Joseph’s loving nature were to be recognized after Mass in March, noted Principal Lisa Milano.