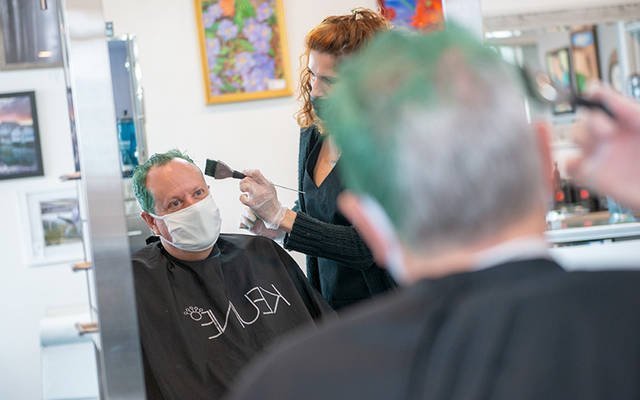 Deacon Kevin Carges has his hair dyed green Oct. 30 at Icon Hair Salon and Spa in Canandaigua. He promised donors who helped him raise $5,000 in donations for Catholic Relief Services that he would dye his hair a shocking color and shave the letters “CRS” into the side of his head. (Courier photo by Jeff Witherow)

Deacon Kevin Carges is not typically known for his outrageous fashion choices, yet he’s currently sporting a head of bright green hair.

What’s more, there are letters shaved into the side of that shocking hairstyle.

Deacon Carges is holding up his end of a deal he made earlier this month. At the start of October, he announced that he and nine other men throughout the country were launching a campaign to raise money for Catholic Relief Services, the U.S. bishops’ agency for assisting the poor and vulnerable overseas. Deacon Carges, who serves at St. Catherine of Siena Parish in Mendon, said that if he raised $3,000 for CRS by the end of October he would dye his hair a “shocking” color, which would be determined by donors’ votes. If he exceeded that goal and raised at least $5,000 by the end of the month, he promised to also have the letters “CRS” shaved into his freshly dyed hair.

Well, his friends and family members, joined by people who support CRS’ work and maybe even a few people who just want to see him look silly, opened their wallets and rose to the occasion. By Oct. 30 he’d not only exceeded his initial fundraising goal of $3,000, but was within a stone’s through of his $5,000 goal. These totals represent funds pledged on his online fundraising page as well as checks made out to CRS and mailed or hand-delivered to Deacon Carges.

A man of his word, Deacon Carges made an Oct. 30 appointment at Canandaigua’s Icon Salon and Spa “to sacrifice my hair to the donors’ wishes of dyed green hair,” Deacon Carges told the Catholic Courier.

During that appointment, his stylist also shaved the letters CRS into the hair on the back of his head.

Although he wondered whether parishioners would take him seriously when he preached at St. Catherine of Siena the next weekend, he was nonetheless happy about what his new hairdo represents.

“I’m thrilled. I am so very thankful to all those who donated,” Deacon Carges said. “Together we will answer so many prayers of those who are suffering greatly.”

Many of the issues Catholic Relief Services addresses in other countries, especially hunger and migration, are being amplified by COVID-19, he said. The organization is working with the health ministries and churches in these nations to increase citizens’ access to masks and handwashing stations, in addition to the relief work it normally carries out, he said.

Deacon Carges, like the other nine men, is a CRS Global Fellow, and in non-pandemic times he visits parishes throughout the Diocese of Rochester and beyond to spread awareness of CRS’ work in the hopes of garnering support for the organization. Through his affiliation with CRS, he has traveled to a number of Third World countries and seen firsthand the severely impoverished conditions in which many people live.

“Close to one-third of our world lives on $2 a day or less,” Deacon Carges said, noting that many of the world’s poor have lost all or much of their incomes during the pandemic. “With so many losing the little they make in income already, the hurt has grown substantially.”

On top of that, he said, contributions to CRS have decreased during the pandemic, as potential donors face their own financial struggles and as parishes were forced to cancel scheduled events, including visits from CRS Global Fellows.

“It breaks my heart that I or others can’t go out and share the CRS story like I did before COVID. Raising money to help others literally means life or death for some,” Deacon Carges said. “Before COVID, approximately 18,000 children under the age of 5 were dying each day. I fear the numbers have increased with the loss of income for so many around the world.”

Deacon Carges said he and the other nine participating CRS Global Fellows had raised more than $40,000 by Oct. 29.

“I hope this gives everyone a smile and a laugh. We did so much good,” he said.

EDITOR’S NOTE: For more information on ways to give to or get involved with Catholic Relief Services, visit www.crs.org.