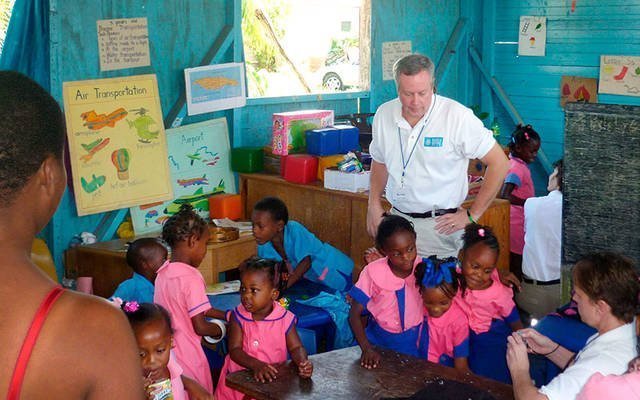 Have you ever seen a deacon with neon purple hair?

You might next month, if Deacon Kevin Carges’ latest project is successful.

Throughout the month of October Deacon Carges, who serves at St. Catherine of Siena Parish in Mendon, will be raising money for Catholic Relief Services, the U.S. bishops’ agency for assisting the poor and vulnerable overseas.

If he and the other nine men participating in this online fundraising campaign reach their collective goal of $25,000, they have committed to shave their heads or dye their hair. And even if they don’t reach their team goal, Deacon Carges has pledged to dye his hair “a bright ugly color for two weeks” if he meets his personal goal of raising $3,000. If he raises $5,000, he has promised to shave the letters CRS into the hair on the side of his head.

“We raise funds for important work and we laugh and share some joy while we’re doing it. That sounds like the joy of the Gospel to me,” Deacon Carges explained in a note on the fundraiser’s website.

The world is in the throes of a global pandemic, and people need some fun and laughs, Deacon Carges told the Catholic Courier in early October. But as important as levity may be right now, reaching out to those in need is critically important, he added.

“Those on the margins are hardest hit during this COVID pandemic. Our faith calls us to reach out to the margins and share our abundance,” he explained.

Since 2009 Deacon Carges has been a CRS Global Fellow, visiting parishes throughout the Diocese of Rochester and beyond to spread awareness of CRS’ work in the hopes of garnering support for the organization. Through his affiliation with CRS, he has traveled to a number of Third World countries and seen firsthand the severely impoverished conditions in which many people live.

“Close to one-third of our world lives on $2 a day or less,” Deacon Carges said, noting that many of the world’s poor have lost all or much of their tin incomes during the pandemic. “With so many losing the little they make in income already, the hurt has grown substantially,” he said.

On top of that, he said, contributions to CRS have decreased during the pandemic, as potential donors face their own financial struggles and as parishes were forced to cancel scheduled events, including visits from CRS Global Fellows.

“It breaks my heart that I or others can’t go out and share the CRS story like I did before COVID. Raising money to help others literally means life or death for some,” Deacon Carges said. “Before COVID, approximately 18,000 children under the age of 5 were dying each day. I fear the numbers have increased with the loss of income for so many around the world.”

Deacon Carges said he felt compelled to do something to help but wasn’t sure what , so he was pleased to learn that another CRS Global Fellow was planning a fundraiser.

“Father Victor Gallier from Atlanta came up with the idea and invited all the Global Fellows to participate. Nine deacons from around the country took him up on the idea in hopes of helping others in dire need,” he said.

Initially, the men talked about shaving their heads if they reached their collective goal, but since some of them are a little lacking on hair, the group added the dyeing option, Deacon Carges said. Although he’s already decided to dye rather than shave his hair, he’s letting his donors choose the color.

“Purple seems to be leading the polls right now. That might work good for Advent,” remarked Deacon Carges, who as of Oct. 9 had raised $240.

He also has promised donors he will post pictures of his new hairstyle on Facebook if he reaches or exceeds his goal. Although he’s never colored his hair before and is not quite sure what to expect, he hopes the fundraising campaign is successful.

“With so much difficulty in the world, I am hoping to give people a laugh or a smile while helping others,” he said. “It’s a win-win, except for my hair, of course.”