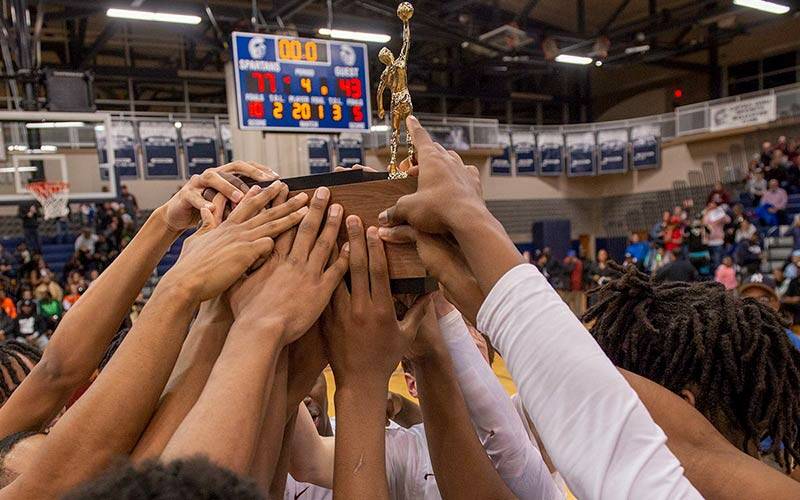 With a Section 5 crown freshly in its possession, the Aquinas Institute boys’ basketball team had a season to remember in 2021-22.

Meanwhile, McQuaid Jesuit’s indoor track program went one better. Not only did McQuaid win its own Section 5 team title, but the Knights’ Rhoan Kaulder — only an eighth-grader — went on to claim a state championship in the long jump.

The second-seeded Little Irish earned a sectional crown by crushing No. 8 Rush-Henrietta, 77-43, in the Class AA title game March 5. The brother duo of Mason and Myles Blackwood led the Irish with 16 points each, with double-figure point totals also coming from Jack Bleier (12), Mykel White (11) and Robert McCullough (10).

Aquinas had advanced to the sectional final by winning 75-52 over No. 7 Fairport in quarterfinal action Feb. 25 as Bleier had 28 points and Mason Blackwood added 17, and 84-66 over No. 3 Edison Tech in semifinal play March 1 behind 21 points from Jordan Jordan and 15 each from McCullough and Mason Blackwood.

Aquinas’ season was ended by Jamestown of Section 6, which edged the Irish 60-58 in state Class AA quarterfinal play March 12. Mason Blackwood netted 19 points and Bleier had 14 to lead the Irish, who ended their season with a 19-4 record.

By a decisive margin, Kaulder won the first of what could be many state titles March 5. He made a long jump of 22 feet, 10.5 inches at the state-championship meet, more than a foot ahead of second-place Ryan John of Valley Stream North (21-10).

Also placing at states for McQuaid were Jayson Chichelli, who took eighth in the 1,000-meter run and 11th in the 1,600; and the 1,600 relay, which also finished 11th. In addition, the Knights’ Jacob Anderson was part of the Section 5 distance medley relay that placed third.

• In boys’ hockey, Aquinas reached the Section 5 Class B championship game. The second-seeded Little Irish downed No. 7 Irondequoit, 9-0, in quarterfinal play Feb. 17, as Connor Mangone netted three goals. The Irish then outlasted No. 3 Webster Schroeder, 6-5 in overtime, in semifinal play Feb. 23 behind Ares Miller’s three goals, including the game-winner. AQ’s title bid was thwarted by top-seeded Webster Thomas, 4-2, in the final Feb. 27. The Irish posted a final record of 16-6-1.

• Section 5 girls’ indoor track highlights came from Aquinas’ Maya Parks, who won the triple jump at the Class A2 championships Feb. 19; and Bishop Kearney’s K’Lah Gause, who placed first in the shot put and third in the high jump at the Class A4 meet Feb. 20.

• In wrestling, McQuaid’s Harrison Aguirre finished as runner-up in the 172-pound weight class at the Section 5 Class A2 championships Feb. 5.