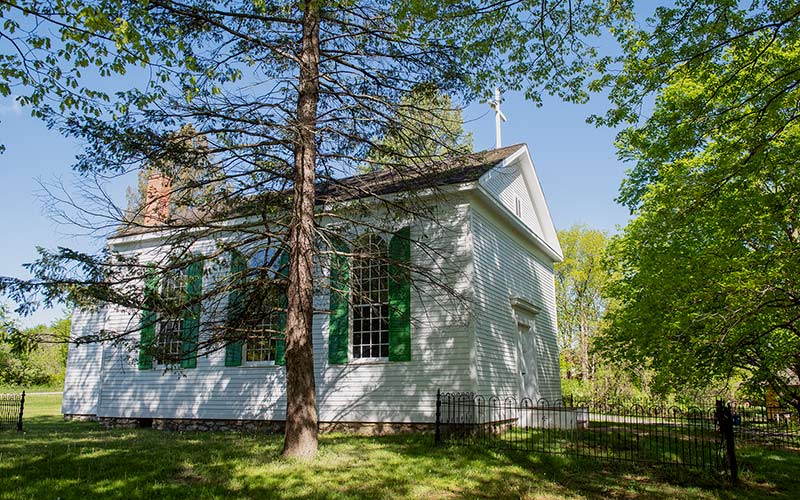 St. Feehan Church is seen on the grounds of the Genesee Country Village & Museum May 17. (Courier photo by Jeff Witherow)

The interior of St. Feehan Church remains largely unchanged from when it was closed in the 1950s. (Courier photo by Jeff Witherow)

MUMFORD — In the 1950s, the Town of Chili was evolving quickly from a quiet farming community into a large western suburb of Rochester.

“The parish was growing so rapidly that there wasn’t any more space,” recalled Dick Sousa, who had joined the parish in 1955. “We had to put folding chairs in the aisle.”

Indeed, St. Feehan — which seated perhaps 100 people in its limited pew space — soon gave way to a larger facility erected one mile to the east, at 3010 Chili Ave. The parish was given a new name, St. Pius Tenth, and celebrated its first Mass at the new church on Christmas 1956.

However, thanks to the efforts of Father Donald Murphy, then pastor of St. Feehan/St. Pius Tenth, that transition did not spell the end for St. Feehan. In fact, the church remains very much in the public eye today.

Visitors to Genesee Country Village & Museum, which opened for the 2022 season in early May, will find the church’s appearance largely unchanged from when it was moved approximately 45 years ago to the living-history museum in the southwest corner of Monroe County.

St. Feehan stands on a small hill in the museum’s Antebellum Village section, among other structures from the 1830s through 1860s. A wooden cross, erected by original parishioners who built St. Feehan, remains atop the freshly painted church exterior. Inside, St. Feehan’s nod to an earlier era is marked by wooden floors and pews that are noticeably worn. A pump organ from the late 1800s — which still works — is in the back of the church, as is a tinderbox that used to store wood for a heating stove. Other highlights include a Communion rail, tabernacle and aged candlesticks in the sanctuary, and Stations of the Cross, stained-glass windows and statues along the walls.

The building’s origins go back to 1854, when a group of Catholic men undertook the task of constructing their own church in Chili on what is now Golden Road. They were from Irish farming families who had previously attended Mass in area homes or traveled several miles to the nearest Catholic church. The new parish was named after St. Fechan — a seventh-century saint from Ireland — at the insistence of Patrick Golden, who donated the land on which the church was built. In the 1880s, the church moved a short distance away to 295 Chestnut Ridge Road.

The church’s centennial observance in 1954 coincided with the arrival of Father Murphy as its first resident pastor and the changing of its patron saint’s spelling to St. Feehan. Within a few years, St. Feehan was supplanted by St. Pius Tenth, and the original church became a site for meetings and recreational activities.

By the early 1970s, with St. Feehan going largely unused, Father Murphy sought to give the church to Genesee Country Village & Museum. It was eventually relocated in 1977 to the living-history facility, which opened in 1966 and is the largest of its kind of New York state.

“We were really excited about it when (the move) finally got approved,” Sousa said.

“I think that was wonderful, because (St. Feehan is) a piece of history, you know,” added Gert Amesbury, who wrote a historical book in 2004 marking the 150th anniversary of St. Feehan/St. Pius Tenth.

For several years after the move, Father Murphy — who died in 1995 at age 87 — would celebrate occasional Masses at St. Feehan’s new location. Amesbury, who played the pump organ at those liturgies, said they were well-attended by St. Feehan/St. Pius Tenth worshipers.

“Oh, yes, they used to pretty much fill the church up,” she said.

“We always went to those Masses. Father Murphy would celebrate the Mass in Latin,” added Sousa — who, along with Amesbury, has attended St. Pius Tenth since its inception.

According to Peter Wisbey, curator of collections at Genesee Country Village & Museum, many present-day visitors who enter St. Feehan consider the building not only an artifact but an ongoing place of worship.

“People will stop to pray,” he said. “We’ve had people inspired to sing because the acoustics are so lovely.”

Wisbey added that reverence for the church remains high even though Masses are no longer celebrated there.

“It’s a holy place, no matter what. People feel really inspired to be in its presence,” he said