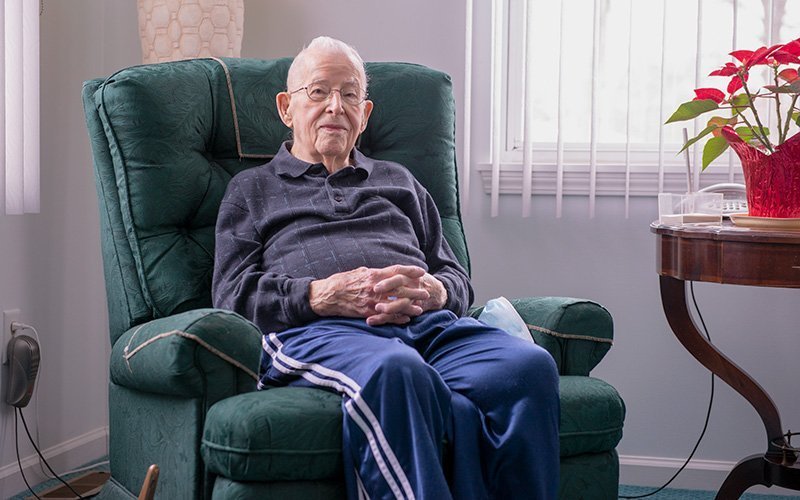 The golden rule has been the guiding principal for Chester “Chet” Palinski’s life for nearly a century.

“I’ve tried to treat people like I would like to be treated, and I think that’s paid off. I’ve made some wonderful friends over the years,” Palinski, 96, recently told the Catholic Courier.

In early 1946, joining the Knights of Columbus seemed like the next natural move for the 22-year-old Palinski, who’d recently returned to his native Illinois after serving in the U.S. Army in Europe during World War II.

“Back in my days … most every community had most of their Catholic men belong to the Knights,” recalled Palinski, who will turn 97 on March 7. “My dad and my cousins all belonged to the Knights. When I got home from Europe, I joined in Illinois.”

Palinski was active in Council 745 in Kanaakke, Ill., until he moved to Michigan. In the mid-1960s, he and his wife, Dorothy, moved to New York, where they took up residence in Greece and joined Our Mother of Sorrows Parish. At the suggestion of a fellow parishioner, he later transferred to Council 3892 Our Lady of the Cenacle, which draws many of its members from Our Mother of Sorrows as well as St. John the Evangelist and St. Charles parishes in Greece, he said.

“It was the wisest thing I ever did. The men that I became acquainted with, and their families, have been just tremendous,” Palinski said.

Palinski threw himself into council life, serving stints as its grand knight, financial secretary, treasurer and recording secretary. He has been a frequent volunteer with the council’s many charitable activities over the years, according to Gerry Streb, Council 3892’s grand knight.

“We sell raffle tickets every year, and people just flock to wherever Chet is sitting,” Streb said. “If we have a chicken barbecue, he’s right in the middle of it. He’s right in the thick of things.”

Palinski did not restrict his involvement to Knights functions, however. Shortly after joining Our Mother of Sorrows, he helped the parish raise the funds necessary to construct a new church building.

“I went visiting the parishioners in their homes, laid out the situation and got some donations that way,” Palinski recalled.

The Our Mother of Sorrows parish family is proud of Palinski and his long history with the Knights, according to Father William Coffas, the parish’s pastor. Father Coffas called Palinski in early February to congratulation him on his anniversary and thank him for being a faithful disciple of Christ.

“He is a wonderful example of faith for us all to learn from,” Father Coffas said. “His faith guides everything he does.”

The Catholic faith has played a large role in his life since childhood, agreed Palinski, noting that he was baptized shortly after he was born.

“I was a breech birth baby, and the doctor told my folks I wouldn’t live through the night,” Palinski explained. “I’ve always tried to be a true Catholic gentleman and tried to make no enemies.”

This held true even during World War II, when one of Palinski’s assignments was to oversee German prisoners of war. He said he did not tolerate dishonesty, but he treated them fairly and recognized that many of them, like many American men, had been forced into military service.

“I got along pretty well with them. They were just down-to-earth people also, and a good many of them were Catholic,” he said.

After returning to the United States, Palinski worked as an accountant in the automobile industry and became involved with AMVETS, eventually holding leadership roles in the organization. He had four children with his first wife, Dorothy, who passed away in 1981. In 1997, he married his second wife, Agnes, and loved her five children as his own. Agnes passed away in 2014.

Through it all, his commitment to the Knights of Columbus remained constant. His fellow Knights put on a car parade for him in early February in honor of his 75th anniversary with the fraternal organization. They also gave him several plaques and put his name on a memorial registry at the Basilica at the National Shrine of the Immaculate Conception in Washington, D.C., Streb said.

“I’ve had unbelievable honors for the various work that I’ve done. I’ve had a remarkable life,” Palinski said.