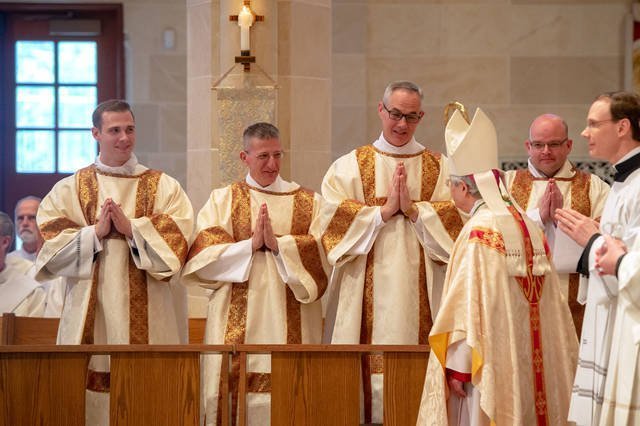 Bishop Salvatore R. Matano speaks to the newly ordained deacons before the presentation of the gifts during the May 25 deacon ordination Mass at Rochester’s Sacred Heart Cathedral. (Courier photo by Jeff Witherow)

ROCHESTER — Despite steady rain and an occasional clap of thunder outside, the atmosphere was decidedly sunny inside Sacred Heart Cathedral on the morning of May 25.

There, Bishop Salvatore R. Matano ordained four men to the diaconate during a Mass lasting more than two hours. Deacon Joseph Martuscello was ordained a transitional deacon as he draws closer to becoming a priest of the Diocese of Rochester, and Deacons Roger DeBell, William Goodman and Jonathan Schott were ordained permanent deacons for the diocese.

The quartet’s collective mood was particularly sunny as the Rite of Ordination concluded, prior to the Liturgy of the Eucharist. As the other deacons present offered the newly ordained the fraternal sign of peace, they were welcomed into the Order of Deacons with words of encouragement and promises of prayers.

“It was a nice opportunity to say thank you to all the deacons who had been praying for me for so long,” Deacon Schott said, adding that another special memory was engaging in prayer and conversation with his fellow soon-to-be-deacons in the moments just prior to the Mass.

For Deacon Martuscello, a personal highlight occurred as the liturgy began — “processing in, seeing my family and all the people who have supported me all these past years,” he said.

One other profound moment took place during the Litany of Saints leading into the ordination rite. As congregation members sang the litany, the four men lay still, prostrate on the cathedral floor.

“At that moment, it all really seemed to come together,” Deacon DeBell recalled.

Deacon Goodman added that he was humbled during that part of the Mass to have “everyone in the cathedral praying for us and all the saints praying for us, too.”

Adding to the emotion of the day was the deacons’ knowledge that they’ve reached a major milestone, after several years of preparation through study and field assignments.

“It exceeded any expectation and anticipation I had imagined,” Deacon DeBell remarked about his ordination, saying the only comparable events in his life were his wedding and the birth of his children.

Deacon DeBell has been assigned to St. Joseph Parish in Penfield for his first diaconal assignment. He also is the principal at Thornell Road School in Pittsford. Deacon DeBell and his wife, Jody, are members of Pittsford’s Church of the Transfiguration.

For Deacon Goodman, his initial assignment will be at the parish cluster of St. Agnes, Avon; St. Rose, Lima; and St. Paul of the Cross, Honeoye Falls. Deacon Goodman, a mechanic for thyssenkrupp Elevator, belongs to St. Luke the Evangelist Parish in Livingston County with his wife, Sheila.

Meanwhile, Deacon Schott’s diaconal ministry is being incorporated into his role as assistant director of campus ministry at St. John Fisher College. He and his wife, Jodi, belong to St. Kateri Tekakwitha in Irondequoit.

As for Deacon Martuscello, he will serve for the summer at All Saints Parish in Corning/Painted Post, not far from his home parish of Ss. Isidore and Maria Torribia in central Steuben County. Deacon Martuscello will then return to St. John’s Seminary in Brighton, Mass., this fall for his fourth and final year of theological studies.

Deacon Martuscello described his emotional state at the deacon ordination as “pure joy,” yet added that he seeks no personal credit for his vocation to the diaconate.

“This is nothing I accomplished. It’s all God; it’s a gift from God,” he said shortly after the Mass ended, as well-wishers gathered around him and the other new deacons near the cathedral’s altar.

Deacon Schott added that he felt overwhelmed by his ordination and all that went with it.

“I have every (positive) emotion, all of them,” he remarked.