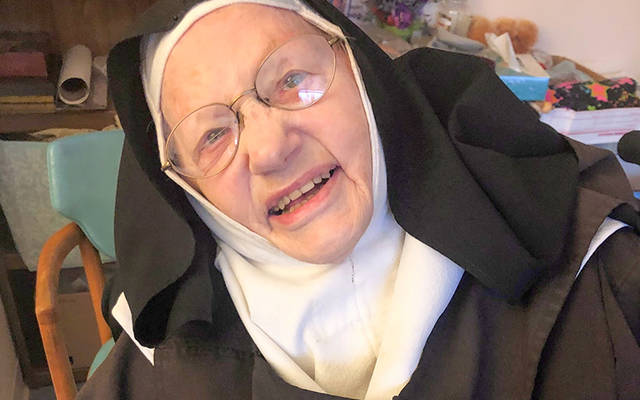 Carmelite Sister Ruth Bittner poses for a photo Nov. 19, the day of her 100th birthday. (Photo courtesy of Dawn Gruba)

Carmelite Sister Ruth Bittner used to get anxious about the uncertainties and challenges in her life, until the day she wrote that phrase on a piece of paper. She set the paper down on the table, looked at it, and felt her anxiety start to melt away. That phrase has been her personal motto ever since.

This mantra has served Sister Bittner well for many years. She turned 100 on Nov. 19, and marked her birthday with a party at the Sisters of St. Joseph Motherhouse in Pittsford, where she has lived for the past several years.

“They’re making a big fuss about it, but to me, it’s just another birthday. It’s another year I live on,” Sister Bittner remarked.

Sister Bittner was born in 1920 in Flint, Mich., where her father worked in an automobile factory. The fumes in the factory eventually started to take a toll on his health, so when she was 4, her family moved out of the city and onto her grandfather’s homestead in Matchwood Township in upper Michigan. Six years later, the family moved to a farm in New Hampshire, near the Connecticut River.

“We moved there in October. All the trees were so big and beautiful,” Sister Bittner recalled.

She loved living on the farm and soon developed a love of horses, especially her family’s work horse, Chubby. She has fond memories of leading Chubby as he pulled a cultivator through the family’s cornfields, and one not-so-fond memory of the time she tried — unsuccessfully — to ride him.

“I don’t think anybody had ever ridden him before,” she mused. “I jumped off the horse. I didn’t get a bruise or a scratch.”

Sister Bittner was one of nine children, although her youngest brother died shortly after he was born. Her oldest sister took on the responsibility of making sure her younger siblings went to church each Sunday.

“She kept me in the faith and kept me strong and taught me all the truths of the church,” Sister Bittner said.

Her sister joined the Sisters of St. Joseph in St. Louis, Mo., in 1931, but despite her sister’s example, Sister Bittner did not feel drawn toward religious life. When she was about 20, she started working in a factory in Vermont that manufactured handles for paint brushes.

“The job I had was to dip them in lacquer. I was only there about six months. That was enough,” Sister Bittner recalled with a chuckle.

During her brief time at the factory, Sister Bittner began to feel the first stirrings of her own religious vocation.

“I realized how much the world needed prayer. I was never going to be a sister, but the Lord called me. (His call) came kind of sudden, I would say, but when it came, it came strongly,” she said.

Sister Bittner didn’t feel she was being called to become a nurse or a teacher, but was she drawn to quiet solitude and the contemplative lifestyle of the Discalced Carmelites. She left the farm in 1942 to enter the Discalced Carmelite monastery in Rochester. The monastery was located on East Avenue at the time but moved to Pittsford in 1956. She frequently cooked for the monastery and threw herself into her ministry of prayer.

Sister Bittner stayed at the Carmelite monastery until about 17 years ago, when she moved to the Sisters of St. Joseph Motherhouse, which was better equipped to handle her health-care needs. The staff and sisters at the motherhouse worked hard to plan a birthday party for her that followed current social-distancing guidelines, and her younger sister traveled from Albany for a brief visit.

Despite her nonchalance about reaching the century mark, Sister Bittner said she’s grateful for her good health.

“I tell the Lord, if you take my senses, take my hearing or my sight, but please leave me a sense of humor, and a little common sense,” she said.

When asked what advice she would give to the younger generations, Sister Bittner said she expected that in these turbulent times, many people could benefit from her motto of living in the present and not fretting about the past or future.

“You don’t know what life is leading into. You just follow the grace of God at the moment,” she said. “Take one day at a time and trust in God to show you, and pray a lot. Keep as close to him as you can.”