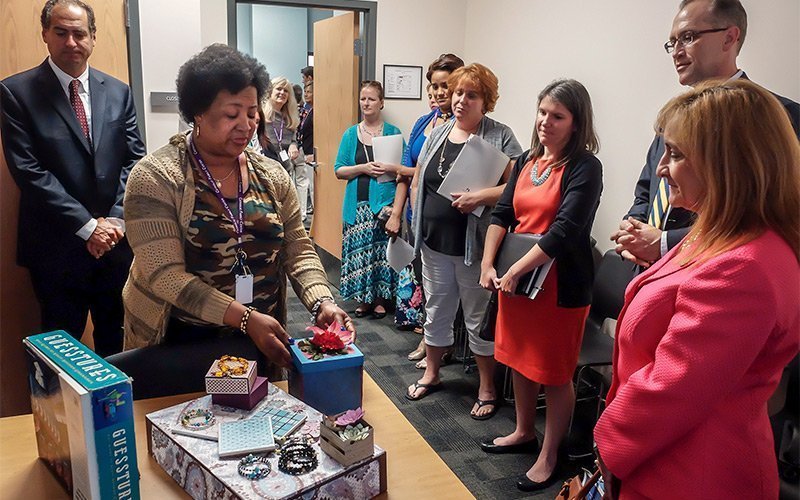 Fancy Vanhoose explains about some of the crafts the clients create during the opening of Restart Outpatient Integrated Care Facility on Aug. 29, in Rochester. The new clinic is house in a facility owned by Catholic Family Center which was recently renovated with support from the NY State Office of Alcoholism and Substance Abuse Services. (Courier photo by Jeff Witherow)

ROCHESTER — Catholic Family Center was founded in 1917 with the four-pronged goal of providing for the poor, serving unmarried mothers and their children, assisting immigrants and helping men who’d recently been released from prison to find jobs.

One century later, the agency continues to carry out many of those tasks, but it’s also expanded its mission to meet the community’s changing needs, according to Marlene Bessette, Catholic Family Center’s president and chief executive officer. The agency currently serves tens of thousands of people through more than 40 diverse programs.

“The (programs) are so many and so broad, but they’re all extensions of the core work that we started with 100 years ago,” Bessette said. “The early things we did helped people come out of poverty. We’re doing them maybe somewhat differently, but we’re still doing those things.”

The mission of the agency, which recently concluded a year of celebrations in honor of its centennial anniversary, is to provide hope for the most vulnerable. Catholic Family Center is the largest provider of comprehensive family services in the Greater Rochester area, and in 2016 alone the agency provided direct services to more than 23,000 people, Bessette said.

Catholic Family Center provided mental-health services to 2,172 people in 2016, for example, and another 3,222 people received substance-abuse-related services through the agency’s Restart residential and outpatient programs. Catholic Family Center is Monroe County’s largest provider of emergency housing and in 2016 sheltered nearly 1,900 people in one of its three shelters, and it assisted more than 1,100 recently-arrived refugees through its resettlement program.

Many of the people Catholic Family Center serves simply need an opportunity to break out of the situations they’re in, and the agency’s more than 400 staff and volunteers are more than happy to provide such opportunities, Bessette said.

Advocacy also is a big part of the agency’s work, she added. Staff and volunteers work through the political system to advocate on behalf of their clients on a regular basis. In recent years Catholic Family Center also has increased its collaboration with other local agencies and entities, especially in local efforts to break the generational cycle of poverty in the region.

Catholic Family Center is the lead agency in the Rochester-Monroe Anti-Poverty Initiative’s PartnerNavigator program, which seeks to help people find the support they need to identify their stumbling blocks, avoid setbacks and continue along the path to self-sufficiency and success. The agency also is active in a team convened by state Assembly Majority Leader Joseph Morelle (D-Irondequoit), in part to improve the health and economic well-being of individuals and families, especially the vulnerable and those affected by poverty. This team includes representatives from the education and health-care fields as well as social-service providers and government officials.

“As we respond to the next 100 years, it’s going to be through collaboration. It’s going to be, how do we get more by working together?” Bessette remarked. “We have all identified the need to find ways to collaborate with each other and be more efficient in the way we serve the people. All of that conversation is happening right now.”