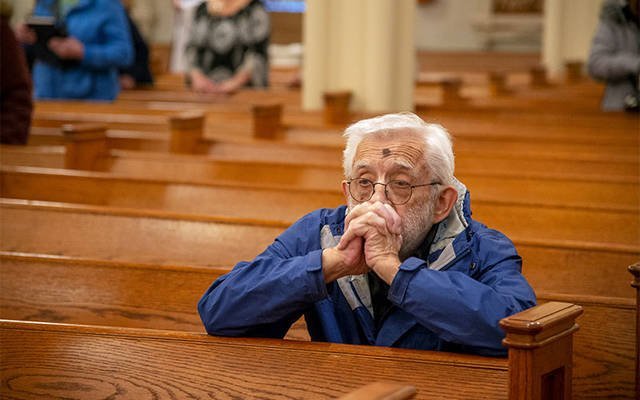 Each year on Ash Wednesday, thousands of Catholics throughout the Diocese of Rochester head to church to have their foreheads marked with ashes.

These ashes serve as a symbol of our mortality and a reminder that during Lent we’re called to repent and turn away from sin, according to Father William Moorby, pastor of Good Shepherd Catholic Community in southern Cayuga County. These ashes also serve as a sign to others, he added.

“When people see us, (we hope) they would see Jesus and remember the things Jesus has done for us, allowing God’s spirit to really give us that ongoing conversion of heart that we’re called to in Lent,” Father Moorby said.

The ashes serve as an outward sign of an individual’s faith, and it’s a sign Mary Ann Bailey said she’s always been proud to wear. Bailey, who belongs to St. Louis Parish in Pittsford, said the ashes remind her of the importance of Ash Wednesday and of Lent, and that Jesus died on the cross to secure the promise of eternal life for his followers, she added.

“When I see the ashes, I understand that Jesus fulfilled God’s promise to us, and so when we become consumed by the things of this world, they remind us of God’s eternal plan for us all,” she said.

When she’s out and about in public on Ash Wednesday, Bailey feels a bond with others who also are marked with ashes.

“There is a look that passes between those of us who have already received our ashes, a look of commonality that we share in this Lenten tradition through our faith,” Bailey said.

Occasionally individuals will tell Bailey that her ashes serve as a reminder that they’ve got to get to Mass that day to get their own ashes. When such brief interactions on that day happen to fellow St. Louis parishioner Carol McManus, she feels honored to have played a small part in helping others live out their faith, she said.

“Even that passing acknowledgment or possibly finding themselves going to the next Mass just because they remembered the occasion would be an ideal outcome, wouldn’t it?” McManus mused. “When I see others with ashes, I tend to smile at them in acknowledgment, since I know we are outwardly sharing our Christian faith, something we don’t often get an opportunity to do.”

The ashes on her forehead have never felt conspicuous to McManus, she added. Even when she’s been out in public after attending Ash Wednesday Mass, she hasn’t had many people comment on her ashes.

“They tended to glance at the ashes quickly then look back to whatever they were focused on before they noticed me,” McManus said. “They might be thinking, ‘That woman has a smudge on her forehead.’ Then, when they recognize what the smudge is, their voiceless question is answered.”

Ann Marie Eckert, pastoral associate at St. Catherine of Siena Parish in Ithaca, has experienced similar interactions, although one in particular stands out in her mind. She was in line at Target buying milk one Ash Wednesday around 10 p.m. when a young man in front of her gave her an odd look then asked if it was Ash Wednesday.

“Because it had been a long day I had forgotten it was still Ash Wednesday, so it took me a few seconds to figure out why he was asking, but I responded, ‘yes,’ with a gesture to my forehead,” Eckert recalled. “He then looked at me again and said, ‘It would be pretty weird if it wasn’t!’ We had a good laugh.”

Some Catholics aren’t quite so comfortable wearing visible signs of their faith, noted Yolanda Nunez, director of faith formation and youth ministry at Holy Apostles Parish in Rochester. Some of Holy Apostles’ young people have said they’re embarrassed on Ash Wednesday because others ridicule them for their faith. Others see the ashes as a sign of impending death, she added.

“For me, I feel it is a sign of the start of the hardest part of my faith, (which is) reflecting on the death of Jesus and how so many times I’m ungrateful,” said Nunez, who also directs the Rite of Christian Initiation of Adults at Holy Apostles. “We all die no matter what, but we have to keep the faith, no matter what. I try my best to count my blessings.”