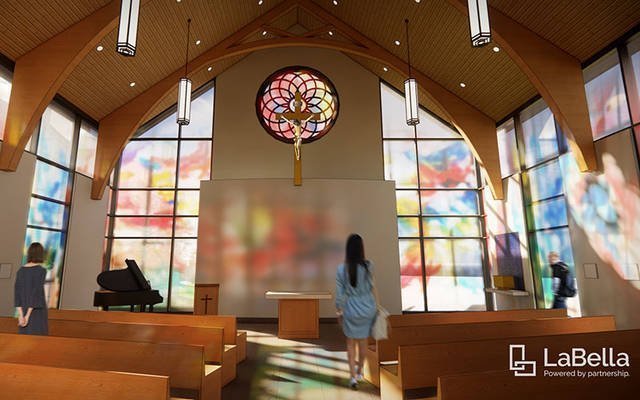 A rendering of the sanctuary inside the new Newman Catholic Center at the University of Rochester. The Newman Community is hoping to break ground on the center in the fall of 2021. (Photo courtesy of LaBella)

The University of Rochester’s Catholic Newman Community is hoping to break ground on a new Catholic center in the fall of 2021.

The proposed 8,300-square-foot Newman Center would include a chapel for Mass, sacraments, private prayer and meditation; space for social programming and meetings; a multipurpose room; and a library. The $6.1 million building would be located close to the student residence halls on the UR’s River Campus, near the pedestrian bridge over the Genesee River, according to Father Brian Cool, director of UR’s Catholic Newman Community.

The Catholic Newman Community. began discussing the idea of having a Catholic center about three years ago, Father Cool said. Upon approval from then-UR President Joel Seligman, the Newman Advisory Board began the task of seeking donors for the multimillion-dollar project.

One of the driving forces behind the project is the university’s growing Catholic student population, Father Cool said, which has doubled in the last four decades, making it the university’s largest religious tradition, with nearly 2,000 students who identify as Catholic. More than 450 students currently engage in Newman’s various programs and weekly Masses.

Despite this growth, the Catholic Newman Community. continues to utilize space on the lower level of the university’s Interfaith Chapel. This is the same space that the community has used for Masses and programming since it was established in 1963. The Interfaith Chapel also serves as the home for the university’s other faith traditions, and, because of that, Father Cool said the Newman Catholic Community has limited office space for him and the rest of the professional staff. Also, the community’s Masses are celebrated in a multipurpose room in the chapel.

“If you were to ask a student where they want to go to pray when there’s a life issue or concern, they always say they go for a walk. There’s no real Catholic environment for them to sit in front of the Blessed Sacrament, because all the materials we use for liturgy are always put away in storage after Sunday,” Father Cool noted.

In addition to having a permanent place to worship and to better serve the growing Catholic population on campus, the new Catholic center will allow students to more visibly see a Catholic presence on campus, he added.

“It (the center) will lift up the identity of Catholic life that we share with our students,” Father Cool said. “I like to say that it moves us from the lower level to Main Street at the university so that students will see it on a daily basis.”

Though the community is still months away from breaking ground and the center isn’t expected to be completed until 2022, Father Cool said students are really excited about the project.

One of those students is Hugh Rider, who serves as the student representative on the building committee and attends Mass weekly at the Interfaith Chapel. The idea of having a dedicated space with Catholic symbols and icons would make Mass more meaningful, he said.

“It (having a Catholic center) would also help us build a stronger Catholic community,” the political science major from Winnetka, Ill., added.

As a junior, Rider will likely graduate before the center is finished. He said while he’s sad that he won’t get to experience the Newman Center as a student, he’s just glad to be a part of a project that will help build a stronger Catholic community at the college.

“I have had such a great experience with the Newman Community so far, and now I’m just doing my part to make sure that it continues to improve for the next generation of Catholic students (at the UR),” he said.

Tags: Monroe County East, Newman Community
Copyright © 2023 Rochester Catholic Press Association, Inc. All rights reserved. Linking is encouraged, but republishing or redistributing, including by framing or similar means, without the publisher's prior written permission is prohibited.