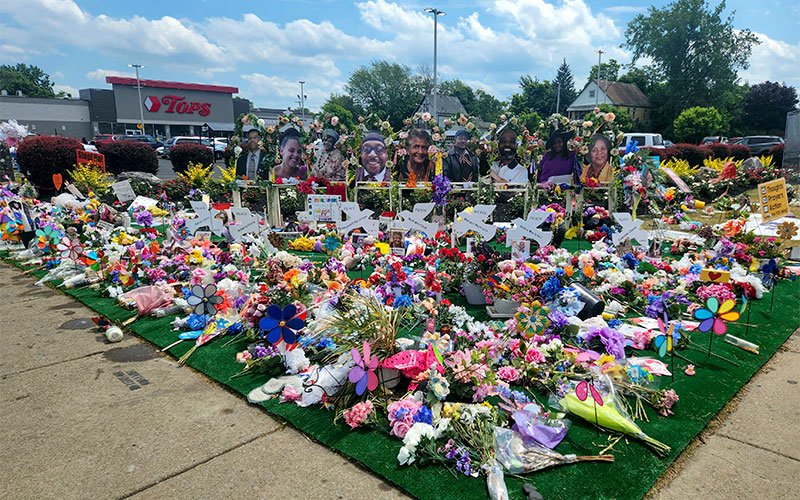 Images of victims are displayed at a large memorial outside a Tops supermarket in Buffalo where 10 people were killed in a gun attack May 14. (Courier photo by Mike Latona)

ROCHESTER — Since losing his brother to a 2001 shooting, Luis Lespier said he’s been sensitive to gun violence in the city where he’s lived since 1980.

His trepidation is reaching new levels following the recent murder of a friend.

“What are we going to do about it? How are we going to stop the violence, guns coming into the hands of people who aren’t supposed to have guns?” Lespier, 62, asked Sept. 21. Just hours later, six more people were shot — and one killed — in four separate incidents across the city.

According to Rochester Police Department statistics, citywide rates of shootings and of homicides since 2020 have more than doubled relative to the previous three-year period of 2017-19. Of this year’s 63 Rochester homicides recorded through Sept. 29, approximately 85 percent were due to gunfire.

The high rate of shootings “all seems so commonplace. I feel desensitized, which to me is a horrible sign. Like, it used to be surprising,” remarked Ciara McGillivray, acting CEO of the Father Tracy Center, which offers support for at-risk people in the neighborhood surrounding its 821 N. Clinton Ave. location.

Mounting rates of gun violence certainly are not unique to the City of Rochester, however. In May 2022, the Centers for Disease Control and Prevention announced, for example, that U.S. firearm homicides had reached the highest level in more than 25 years.

Jarring recent examples are a May 14 gun attack at a Buffalo supermarket where 10 people died and three were injured and a May 24 massacre at a small-town school in Uvalde, Texas, that left 21 people dead — including 19 children — and wounded 17 others.

As public officials grapple with how to bring the crisis under control, McGillivray asserted that strategies must reach beyond gun access by probing what leads people to commit such violence.

“We need to address the root cause — why do you want a gun, why do you have issues that cause you to want to use a gun?” she said.

“The bishops are very concerned about the proliferation of guns in our society, whether it be handguns or assault rifles,” he said.

Poust said the state’s bishops were frustrated by a June 23 U.S. Supreme Court ruling that granted a constitutional right to carry a handgun in public for self-defense. The decision overrode a longstanding New York law requiring anyone seeking that right to provide a specific need for doing so. Poust said the Supreme Court’s ruling “was not helpful in establishing some reasonable limits with the right to bear arms.”

In response to the Supreme Court decision, New York Gov. Kathy Hochul announced several new state laws that took effect in early September. Among them are a ban on carrying concealed firearms in certain public places, particularly where large crowds gather; expansion of requirements for people seeking to obtain or maintain firearm licenses; and tightening of safe-storage requirements.

Poust said the state’s bishops support these new laws in hopes of reducing gun-related street crimes, domestic violence, suicides and mass shootings. He pointed to a “flood of illegal handguns in New York coming from all over,” adding that change is needed in laws that allowed the alleged perpetrators in the Buffalo and Texas mass shootings — each only 18 years old — to legally purchase assault rifles.

“I’m not talking about banning gun ownership. But the state does have an obligation to protect its citizenry,” Poust said.

Yet changing laws is only one step toward reducing the violence, McGillivray contended.

“Pretty much everyone we talk to comes from trauma and violence in their childhoods,” McGillivray said of those who visit the Father Tracy Center, which serves a northeast Rochester neighborhood rife with drugs and gang activity that often lead to gun-related tragedies.

The coronavirus pandemic — and the depression, anxiety and isolation it has spurred — has exacerbated the issue nationwide, she noted.

Poust said “a certain nihilism” has seemingly taken hold in this country, cutting across all racial and socioeconomic sectors and playing into the propensity for violent crimes to be committed.

“Something has definitely changed. There’s just a fundamental lack of respect for any form of human life — a sense that life is meaningless and worthless. How do you combat that?” Poust asked. “Political leaders, religious leaders, law enforcement, social workers and psychologists need to get together and look for answers together. No one public policy will fix it, but that doesn’t mean you don’t try. Too many people are dying, and that’s the bottom line.”

The Father Tracy Center is one example of efforts to buck the trend. The center supports and advocates for neighborhood residents — especially young men — before they become directly affected by gun violence. “We’ve got good resources here,” said Father Werth, who serves on the center’s board of directors.

Other positive steps are being taken at St. Monica Parish in southwest Rochester, another area beset by gun violence. Parishioners John Curran and John DeMott, who are active in social-ministry efforts there, noted such past and current parish initiatives as partnering with area organizations; extending religious, athletic and social opportunities to neighborhood youths; and offering its outdoor facilities for the Westside Farmers Market, public forums addressing gun violence in the neighborhood, and a peace march in May 2021.

Poust asserted that peace-building initiatives should be a priority as a pro-life issue for all Catholics, regardless of whether they live in violence-ridden areas.

Lespier, for one, said he welcomes all efforts to restore peace to the North Clinton neighborhood where violence frequently brings tragic results for innocent people as well as those involved in conflict.

“There’s so much fear over what we call the blind bullet,” Lespier remarked. His words proved unfortunately prophetic when, on Sept. 28, a 3-year-old boy suffered life-threatening injuries when struck by gunfire during a shootout just a few doors down from the Father Tracy Center.

Meanwhle, Lesper added that his list of acquaintances killed or injured by gunfire has grown way too long.

“I’ve been through so much,” he said.

Tags: Life Issues, NY Catholics
Copyright © 2022 Catholic Courier, Inc. All rights reserved. Linking is encouraged, but republishing or redistributing, including by framing or similar means, without the publisher's prior written permission is prohibited.