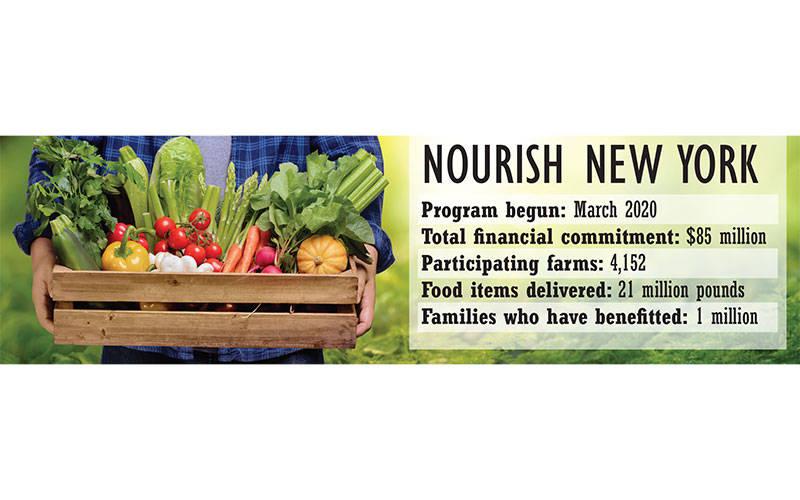 EDITOR’S NOTE: This is the fourth story in a series on the Nourish New York initiative.

New York state’s recently passed budget ensures continuation of a vital food program, and Catholics of the Rochester Diocese can take satisfaction in knowing they played a role in securing those funds.

Funding for the first two phases of Nourish New York totaled $35 million but initially was slated to end Dec. 31, 2020. In early February of this year, the Diocesan Public Policy Committee urged local Catholics to advocate for a $50 million extension of the initiative for the state’s new fiscal year, which began April 1.

That objective was realized when a $25 million infusion was announced by Gov. Andrew Cuomo March 2 and an additional $25 million was included in the $212-billion state budget in early April.

“We’re excited. I think our advocacy really made a difference,” said Marcus Ebenhoe, a public-policy committee member who serves as Catholic Family Center’s director of advocacy and parish social ministry. He noted that support for Nourish New York was voiced via online forms, postcards and letters sent to the governor’s office in conjunction with Public Policy Advocacy Weekend, which took place Feb. 13-14 at parishes across the diocese. Public-policy committee members also engaged in dialogue with state legislators on the issue, Ebenhoe noted.

Nourish New York was launched May 1, 2020, as a response to the coronavirus pandemic. The initiative provides funding to emergency-food providers — mainly food banks — so they can buy dairy, produce and meats directly from area farmers, the fishing community and food manufacturers. The emergency-food providers then funnel the purchased items through their distribution chains to reach people who are food-insecure.

Nourish New York has helped offset financial fallout from the COVID-19 crisis, which served to shrink the market for farmers’ products and made it more difficult for consumers — including many who suddenly became unemployed — to afford food. The initiative has enabled farmers to sell more of their products and the public to have better access to fresh local foods.

Nourish New York has been “a tremendous program,” said Daniel Egan, executive director of Feeding New York State, a coalition representing all 10 of the state’s food banks. Egan extensively lobbied state officials and political leaders in support of the initiative.

“It’s helped so many farmers and so many families, and I don’t know what we would have done without it. I can’t say enough good about it,” he remarked.

During an April 13 press briefing, Cuomo noted that Nourish New York funding has resulted in 21 million pounds of dairy, produce and meat/seafood reaching more than 1 million families. The governor added that the number of participating farms — 4,152 thus far, according to Egan — is expected to grow thanks to the extension of Nourish New York.

The program’s positive effects were noted by Natasha Thompson, president and CEO of the Elmira-based Food Bank of the Southern Tier. Through Nourish New York, Thompson said, her food bank has acquired and distributed nearly 775,000 pounds of New York dairy, produce and meats; the amount of dairy products distributed by her food bank more than doubled from 930,000 pounds in 2019 to just under 2 million pounds in 2020.

“We were thrilled to be able to provide our clients with high-quality, nutritious food while also supporting our local farmers and producers who were also hit hard,” Thompson said. “Nourish New York was truly a win-win program, and we hope it continues into the future.”

Even though the state’s investment in Nourish New York has now reached $85 million, Egan said he’s advocating for an additional $50 million during the 2021-22 fiscal year — some of which could be spent on additional storage space and trucks — and for Nourish New York to become a permanent program.

He also stressed the need for continual improvement in strategies to ensure food produced in New York gets onto the tables of food-insecure residents rather than go to waste.

“With people losing their jobs, we’ve had those people coming to our parishes over and over, looking for food,” he said.