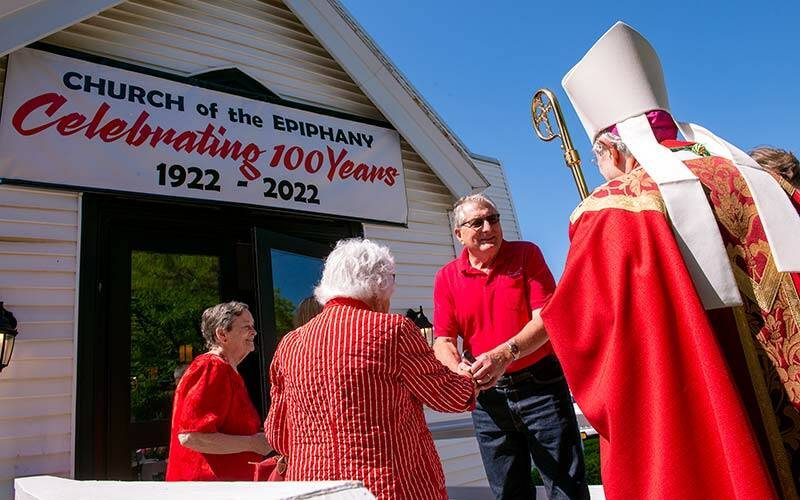 Every once in a while, Sue Nellany closes her eyes during Sunday Mass and just listens to the sounds of the congregation singing around her at Church of the Epiphany.

“We have a choir, and sometimes there’s only a few people up there, but you would think it would be a couple dozen because it’s just wonderful,” Nellany remarked.

Nellany, who has been worshipping at the Sodus church since the early 1970s, said she is not surprised by parishioners’ willingness to share their considerable vocal talents. Neither is Bishop Salvatore R. Matano, who celebrated a June 5 Mass to honor the centennial of Church of the Epiphany’s founding.

Bishop Matano compares parishioners’s gifts to those of the Magi

For 100 years, the Sodus church’s parishioners have been bringing their talents and gifts to God, just as the Magi of old brought their gifts of gold, frankincense and myrrh to the infant Jesus on the first epiphany, Bishop Matano remarked.

“Your gifts are again, like those of the Magi, gifts of love, gifts of adoration, gifts of sacrifice,” Bishop Matano said.

Church of the Epiphany’s earliest parishioners sacrificed to build the church from humble beginnings, Nellany said. Around 1915, Catholics in Sodus gathered regularly for Mass in a makeshift space above a grocery store as they worked to establish Church of the Epiphany. The parish was incorporated in 1922, but construction of the church building continued for several more years, financed by the founding parishioners, she said.

The Catholic parish was not universally welcomed by Sodus residents. In fact, members of the Ku Klux Klan indicated their disapproval by burning a cross on the church grounds in 1922, even before the church had been completed, said Nellany, chair of the committee that planned Church of the Epiphany’s centennial events.

The founding parishioners persevered, however, and the parish grew. Church of the Epiphany was a mission of nearby St. Mary of the Lake Parish in Ontario from 1934-42 and later had its own mission church in Sodus Point’s St. Rose of Lima Chapel. The Sodus, Ontario and Sodus Point parishes came together in 2009 to form St. Maximilian Kolbe Parish, and St. Rose of Lima closed in November 2020.

Throughout all the ups and downs of parish life, the celebration of the Eucharist has been “the cement which has kept this community together,” Bishop Matano said during his homily June 5.

“In this place, the Gospel has been proclaimed. In this place, Christ has been celebrated in first Communions, in marriages. People who were part of the life of this church were carried over that threshold into this place to be given over to Christ in the halls of eternity. In this place, so many prayers were raised in silence and in contemplation,” Bishop Matano said.

After the centennial Mass, Bishop Matano headed to a celebratory luncheon in the church hall, where he wielded a set of tongs as he cheerfully served dinner rolls. He was joined in the serving line by St. Maximilian Kolbe parishioners who hail from St. Mary of the Lake. They had volunteered to serve so those who worship at Church of the Epiphany could enjoy the celebration, Nellany said.

All are welcome at Church of the Epiphany, regardless of where they usually worship, Nellany said.

“Everyone talks to everyone after Mass. There’s just a lot of community here,” remarked Helen Hillis, who, along with her husband, Bob, joined the parish in 1974. “It’s very welcoming. There are people that came here just because it was the only Mass they could attend that weekend, and they never leave because they find people that welcoming. It’s just the way it’s always been.”

“It’s a family-oriented parish,” added Dorothy Eastley, who has worshipped at Church of the Epiphany since 1951.

One member of the parish family, Father Ntaiyia, was noticeably absent from the June 5 celebration. A native of Kenya, Father Ntaiyia was away on a long-awaited visit to his homeland, yet he was with his parishioners in spirit as he celebrated a Mass of thanksgiving that began at the same time as the Mass in Sodus. He will celebrate with them in person Sept. 18 during a community celebration after the 10:30 a.m. Mass at Church of the Epiphany.