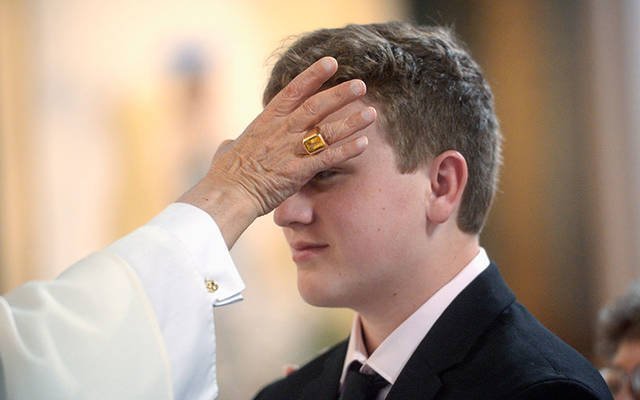 In May 2019, Bishop Salvatore R. Matano anoints a confirmand’s forehead during the celebration of the sacrament at Immaculate Conception Church in Ithaca. (Courier file photo)

As congregations have begun returning to Sunday and weekday Masses in the Diocese of Rochester, parishes also are catching up on special sacramental celebrations.

The coronavirus forced postponement of such sacraments as confirmations, first Communions and baptisms that were originally scheduled for the spring of 2020. However, last month, the celebration of many of those sacraments resumed when the New York Forward Plan permitted houses of worship to offer public liturgies with occupancy restrictions and requirements for to social distancing and sanitizing.

Donald Smith, diocesan coordinator of sacramental catechesis and family life, said he’s glad that the sacraments are finally being celebrated, despite what he described as the “less than ideal” conditions of small congregations, social distancing, face masks, hand sanitizing and other safety protocols.

“You have to be creative, but there are ways to do it,” he said of celebrating the sacraments in such circumstances.

Smith noted that sacramental preparation has continued throughout the pandemic despite the suspension of group gatherings. During this period, his office increased virtual and family learning for those looking forward to receiving sacraments.

“They’re going to be ready. It’s just a matter of when they can celebrate,” he said.

Sacraments in the diocese are currently being administered and/or planned as follows:

‚Ä¢ Baptism: For the time being, most baptisms are being celebrated outside of Sunday Masses due to concerns about church capacity, Smith said. These celebrations typically are individual baptism services, although Smith said multiple baptisms can take place during the same event if space allows.

‚Ä¢ First Communion: According to Smith, most first Communions currently are taking place individually as part of regularly scheduled Sunday Masses. Some group first Communions also are being held, such as at Ithaca’s Immaculate Conception Parish, where eight young people are set to receive the sacrament during a 5 p.m. service July 26.

‚Ä¢ Confirmation: Plans are underway to reschedule all confirmation services that were originally set for this past spring. Smith said confirmations will take place on weeknights over the next few months, with Bishop Salvatore R. Matano presiding at all of the services. Smith also noted that young Catholics who wish to hold off on being confirmed can opt to join groups next spring.

‚Ä¢ Rite of Christian Initiation of Adults: Smith said parishes have recently begun administering the RCIA sacraments of baptism, Communion and confirmation for people who were originally set to receive those sacraments at parish Easter Vigil liturgies on April 11. The RCIA services are typically being celebrated separate from regular Sunday Masses. Candidates and catechumens also may opt to delay their initiation into the Catholic Church until next year’s Easter Vigil, Smith said.

‚Ä¢ First penance/reconciliation: Smith noted that first reconciliation, typically celebrated as a group event with a Liturgy of the Word, is currently being blended into regular parish reconciliation schedules on an individual basis. He added that many diocesan young people made their first reconciliations in Advent of 2019, but those who had planned do so during Lent need to get caught up now.

‚Ä¢ Matrimony: Although many diocesan couples are opting to delay their weddings until 2021, Smith said celebrations of the sacrament of matrimony with small congregations may now proceed as originally planned “if the couple is comfortable” with requirements for everyone in attendance to adhere to safety restrictions. He added that the annual diocesan Marriage Recognition Mass, originally set for May 17 with Bishop Matano, won’t be rescheduled this year out of concern for older participants who might be particularly vulnerable to the COVID-19 virus. He said that he expects the popular marriage liturgy to return next spring.

In addition, funeral Masses — both private and public — are again being celebrated at diocesan parishes, as are memorial Masses to honor people for whom funeral Masses could not be celebrated during the suspension of all public Masses beginning in mid-March.