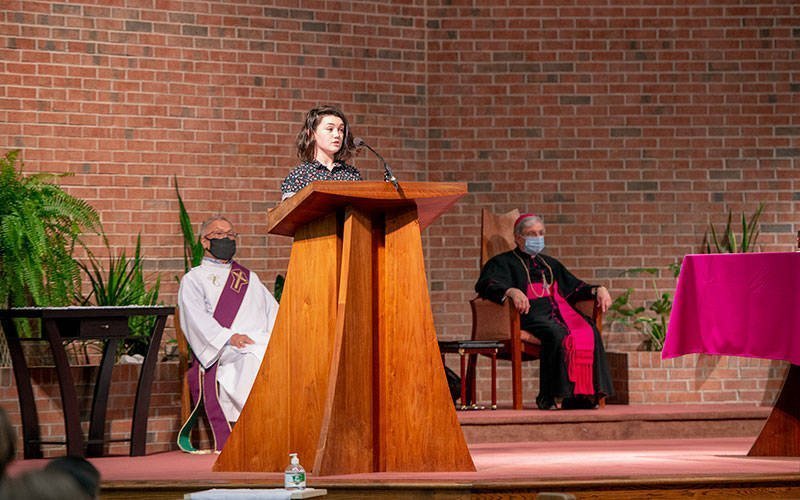 Mackenzie Yaddaw of St. Agnes Church in Avon gives her witness talk during the March 23 Hands of Christ ceremony at St. Lawrence Church in Greece. (Courier photo by Jeff Witherow)

GREECE — After a year’s worth of limited opportunities for public gatherings, Molly Wescott found the sight of so many fellow high-school seniors in one place to be a very welcome one.

“I think it’s amazing that we can get together to celebrate the teens and their churches,” Molly said just before the start of a diocesan Hands of Christ ceremony March 24 at St. Lawrence Church.

Molly, 17, a parishioner of St. Theodore in Gates, was among more than 300 young honorees from across the Rochester Diocese to receive Hands of Christ recognition for 2021. There were three get-togethers in all: recipients also were honored at services on March 22 at St. Mary Church in Corning and March 23 at St. Lawrence, with Bishop Salvatore R. Matano presiding at all three ceremonies.

The award is presented annually by the diocese to recognize high-school seniors who have exhibited outstanding service in their parishes, homes, schools and/or communities, demonstrating Christian attitude through their word and example. Approximately 320 high-school seniors received Hands of Christ recognition this year, according to Mark Capellazzi, diocesan project coordinator for youth and young-adult ministry. Each honoree was awarded with a plaque.

Although Hands of Christ has paid tribute to young diocesan Catholics for many years, the gatherings in March were unique in that they occurred almost exactly a year after the coronavirus pandemic began drastically altering daily life across the diocese.

“To say times have been difficult is an understatement,” Shannon Ervay, a parishioner of St. Mary of the Lake in Watkins Glen, remarked during her witness talk March 22. However, Shannon echoed Molly’s sentiment by saying that being able to unite for the Hands of Christ event was “a blessing as well as an honor.”

Meanwhile, Bishop Matano commended all the recipients on staying true to their faith amid many COVID-19-related challenges, expressing confidence that they will represent the Catholic Church proudly in future years.

Joining Shannon in the honor of being selected as Hands of Christ witness speakers were Mackenzie Yaddaw of St. Agnes Parish in Avon, who spoke at the March 23 ceremony; and Jon LeFrois of St. Theodore, who was due to address the March 24 recipients but was unable to attend. His prepared witness talk was instead given by his twin brother, Alan Michael, also a Hands of Christ recipient.

The witness speakers noted that they’ve endeavored to be Hands of Christ through such activities as community volunteerism and youth-group involvement. They also stressed the deeper meaning of their award through such Christ-like actions as being loving and compassionate toward all kinds of people, especially those who are vulnerable and struggling. Another point they emphasized was the importance of embracing their Catholic faith from an early age.

“It goes without saying that none of us would be the people we are today without our Catholic upbringing,” Mackenzie stated.

“Throughout my life, my faith has been key in keeping me going, encouraging me to improve as a person,” Jon added.

As for Molly, she recalled leaning on her faith at the young age of 7, when she faced a potentially life-threatening situation: She was diagnosed with ovarian cancer. One of Molly’s few enduring memories from that time period, she said, is having prayed with her family that her surgery would go well and she would get better.

“Luckily, the doctors were able to get the whole tumor out in time (before it spread),” she said, adding that she’s been cancer-free ever since.

Molly noted that she and her family have maintained devotion to their faith throughout her childhood, attending Mass every Sunday and praying the rosary frequently. As she’s grown older, Molly has increased her involvement at St. Theodore with such activities as altar serving, music ministry, youth group and serving as a youth representative on the parish pastoral council.

Molly is now looking ahead to graduating in June from Gates Chili High School and beginning studies next fall at SUNY Fredonia, where she plans to major in music education. Despite the challenges she’s faced — earlier in life with her health and, more recently, with a forced decrease in activity due to the pandemic — Molly acknowledged being happy and hopeful for the future.