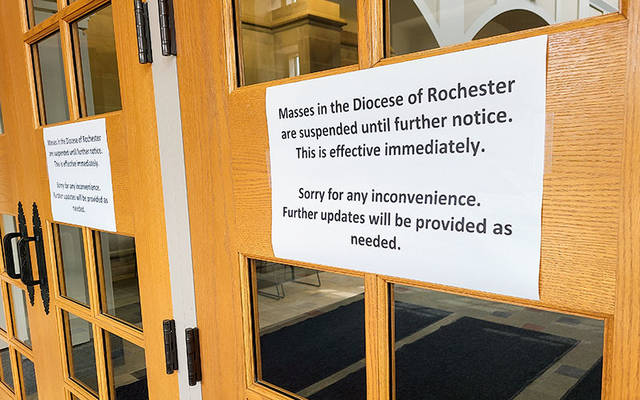 A sign at Rochester’s Sacred Heart Cathedral notifies parishioners that public Masses are not being celebrated during the coronavirus pandemic. (Courier photo by Jeff Witherow)

Although churches in New York state remain closed for “congregant worship” for the time being due to the New York State on PAUSE executive order, Bishop Salvatore R. Matano has instructed parishes to begin planning changes in preparation for the eventual resumption of public Masses in the Diocese of Rochester.

State officials have not yet notified diocesan leaders when houses of worship will be permitted to reopen in New York, but Bishop Matano is asking parish leaders to take steps to facilitate reopening under social-distancing guidelines.

“Considerable thought should now be given at the parish level concerning practical and logistical needs for the gradual celebration of Holy Mass with the faithful present for the administration of the sacraments,” Bishop Matano wrote in a May 14 memorandum to diocesan priests, pastoral administrators and deacons.

New York began a staggered or phased reopening May 15, permitting some businesses and other entities in the Finger Lakes, Southern Tier and Central New York regions to resume activities under certain restrictions. According to Gov. Andrew Cuomo’s New York Forward reopening plan, such industries as manufacturing, construction and agriculture are permitted to reopen during Phase One. By contrast, because they involve large gatherings, education and arts, recreation and entertainment activities are not slated to reopen until Phase Four of the plan takes effect.

There will be at least two weeks in between each phase in order to allow state and local leaders to monitor the rates of infection and hospitalization in their respective regions before moving on to the next phase, according to the New York Forward plan. If these rates appear to be rising too fast, officials can delay the implementation of the next phase.

“However, to date, churches and houses of worship are not listed under any phase,” Bishop Matano noted in his memo.

At a May 18 news briefing in Buffalo, the governor said houses of worship will be treated as large gatherings such as sporting events, which generally fall into the fourth and final phase of the reopening plan. This is because such houses of worship likewise draw large numbers of people, and “anywhere you have the concentration, the density at gatherings, that is the issue,” Cuomo explained.

What remains unclear is whether houses of worship would fall into a different phase if significant changes were made, according to Robert Mujica, director of the state Division of Budget.

“Houses of worship, if you were just to open them up regularly with new guidelines, would fall in the last stage, because as the governor said, that’s a mass gathering, the same thing with a stadium, the same thing with any situation where you have a lot of people together,” Mujica said during the televised May 18 briefing. “The question is whether or not you can do something less than that, but that’s still an open question.”

In recent weeks, officials from the Diocese of Rochester have joined the other Catholic dioceses of New York and the New York State Catholic Conference in seeking assistance and clarification about where churches and houses of worship fit in the New York Forward plan. Bishop Matano addressed this lingering question May 17 during a livestreamed Mass.

“Our diocese has prepared and submitted to the proper authorities protocol that would be followed putting in place restrictions for the safety of all,” Bishop Matano remarked before beginning his homily. “We are awaiting a response, as well as official notification of which phase for reopening churches will be placed and when that shall occur.”

Diocesan officials also do not know what attendance limitations may be placed on Masses when they are allowed to be celebrated in the presence of the faithful, Bishop Matano said said in his May 14 memo.

“However, experience from other parts of the country give us some assistance: initially, we expect attendance to be very small and restricted and, over time, gradually increase. This may be regulated by a fixed number or by a determined percentage of the total capacity,” the bishop wrote.

The celebration of public Masses and the administration of the sacraments is the primary intent of all parishes, he emphasized.

“Every other pastoral activity, while important to parish life, should remain limited and remote in order for our parishes first to be able gradually to give people the opportunity to worship God and have greater access to the sacraments,” he wrote.

The bishop said he will provide parishes with specific and detailed policies and guidelines for the celebration of Mass and other sacraments once the diocese receives more guidance from state officials. For now, however, he said parish leaders should consider the sizes and configurations of their parishes as they begin to ponder such considerations as:

‚Ä¢ how they can regulate attendance if Mass attendance is limited, and how to convey this information to parishioners;

‚Ä¢ whether parishioners should be encouraged to attend Mass on a day other than Sunday in order to spread out the population; and

‚Ä¢ whether additional Masses can be added to the schedule in order to accommodate more parishioners.

Since pews and other surfaces will need to be disinfected between Masses, parish leaders should determine who will do this chore and how long it will take, which may require shifts in the scheduling of Mass times.

Once public Masses do resume, parishioners will notice a number of other changes, including the following:

‚Ä¢ Cry rooms and nurseries will be closed, and unnecessary chairs, tables and furniture will be removed to limit cleaning.

‚Ä¢ Missalettes, hymnals, prayer cards and other papers will be removed from pews.

‚Ä¢ Holy water fonts and baptismal fonts and pools will be empty, and water will be changed and blessed for each baptism.

‚Ä¢ Those attending Mass must bring and wear their own face masks.

‚Ä¢ Collection baskets will not be passed from person to person. Instead, parishioners will be encouraged to give online or to place their contributions in collection points near the entrances.

‚Ä¢ Parishes will minimize the number of people fulfilling liturgical ministries, and there will be no altar servers of any age until further notice.

Bishop Matano acknowledged in his May 14 memo that — despite all such precautions — anyone attending Mass or any public gathering during the current pandemic still faces the risk of contracting the coronavirus. As a result, he said anyone who is sick or who fears contracting the virus or COVID-19, the disease caused by the virus, should stay home.

“For this reason, the obligation to attend Sunday Mass will remain suspended for all Catholics in the Diocese of Rochester until further notice,” Bishop Matano wrote.

UPDATE: On May 20, Gov. Andrew Cuomo announced that religious gatherings restricted to groups of no more than 10 people will be permitted in New York state beginning May 21. In a May 20 statement, the Diocese of Rochester said it is working with the New York State Catholic Conference and the other New York dioceses to obtain more information from the state to determine how best to resume Masses with the faithful present in such a limited manner.