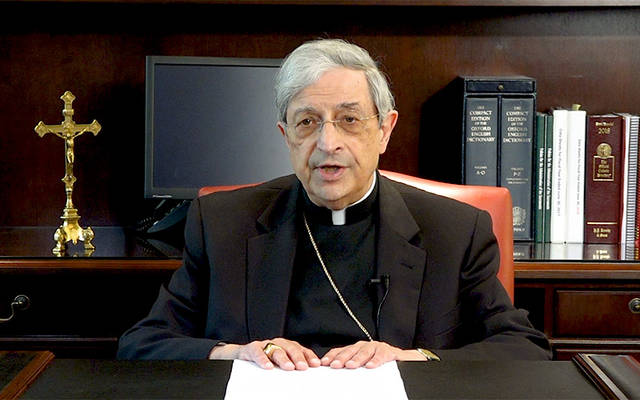 Bishop Salvatore R. Matano addresses the faithful in a video posted Aug. 5 to the diocesan website at www.dor.org/letter-to-the-faithful-2019.

The Diocese of Rochester has begun preparing the faithful for what might happen following the Aug. 14 opening of a one-year “window” into the state statute of limitations on cases of child sexual abuse.

Although several prior iterations of the CVA applied only to such private institutions as churches and religious organizations, the enacted legislation applies equally to such governmental and other public institutions as public schools and school districts. As such, its passage ultimately was supported by the archbishop of New York, Rochester’s Bishop Salvatore R. Matano and the state’s six other bishops, who had opposed earlier versions.

“We pray that the passage of the Child Victims Act brings some measure of healing to all survivors by offering them a path of recourse and reconciliation,” the bishops wrote in a January statement.

Yet just days before the window opens and in the wake of recent advertising campaigns by attorneys from around the country, no one can predict the consequences of hundreds or perhaps thousands of lawsuits being filed against New York’s eight dioceses.

Officials of the Diocese of Rochester are working to keep members of the diocese informed as the situation unfolds.

One informational tool being used by the diocese is an 8.5-minute video that was posted on the diocesan website  Aug. 5. In the video, Bishop Matano addresses the faithful, observing that “the opening of the window and the inevitable (news) coverage of potential lawsuits may raise concerns in your mind about the tragic clerical abuse scandal and the extent to which the diocese has worked to put programs in place aimed at creating a safe environment for all, especially our children.”

The bishop goes on to “renew my most sincere apology to anyone who was harmed by a cleric or church personnel who so terribly violated their position of trust and scarred the very lives of those whom they were called to serve. I pray that the victims and all affected by these egregious acts will find healing and hope. Know that Our Lord never abandons us and is always present, especially in times of grave difficulty and suffering.”

The final component of the video is a list of statements, concluding with the following: “The Diocese has not received a contemporary allegation of sexual abuse of a minor since 2006.”

The statements at the end of the video also are among the points listed in an article that accompanies Bishop Matano’s August Catholic Courier column, which is presented this month as a special message to the faithful.

In his video address, Bishop Matano also asks for prayers as he weighs “difficult decisions” and said diocesan officials are “reviewing all possibilities” to address the financial impact of anticipated lawsuits. He added that he would pursue “a path that is sensitive and fair to all victims, while making every effort to ensure that the church’s mission will continue in our diocese, our parishes and institutions.”

After legislation similar to the CVA passed in other states beginning in the mid-2000s, nearly a dozen U.S. dioceses and archdioceses filed for bankruptcy in the face of multimillion dollar claims on cases going back 60 or more years. The spokesman for one such diocese described bankruptcy as the fairest way to ensure all victims who came forward received a monetary settlement. Otherwise, the spokesman said, “the first victims who would have come forward could have received all the money that the diocese had available.”

Father Condon said July 24 that since the spring of 2018, the Diocese of Rochester has received more than 100 notices of claim — letters from plaintiffs’ attorneys, indicating intentions to file lawsuits. But he said he could not predict the total damages that might be demanded if such claims succeeded in court nor whether the diocese would be forced into bankruptcy.

Also on Aug. 5, the diocese issued a report showing that since 2018 it has paid out approximately $2.7 million in settlements — plus about $125,000 in administrative, legal and investigative fees — to 23 individuals who accepted offers from an independent reconciliation and compensation program administered by the Hon. Robert J. Lunn as well as 10 people who settled directly with the diocese.

In February 2018, the diocese engaged Lunn, a retired justice of the New York State Supreme Court’s Appellate Division, to settle claims of sexual abuse of minors by diocesan clerics or other diocesan personnel. The diocese agreed at the outset of the arrangement to accept Lunn’s settlement decisions without recourse of appeal.

The former justice met with 20 claimants, reviewing their information as well as a report from an independent investigator, and offered compensation to each of them. The total compensation offered by Lunn was $1.09 million, but only 13 claimants accepted his proposals, reducing the total payout on Lunn’s cases to $950,000, according to the diocesan report.

Rather than working with Lunn, 14 other victims chose to deal directly with the diocese, which offered them settlements totaling $2.4 million. Ten of the 14 accepted their offers, which totaled approximately $1.72 million, the diocese said.

Father Condon acknowledged the likelihood that lawsuits seeking greater compensation will be filed under the CVA by the seven individuals who rejected Lunn’s offers and the four who rejected settlements directly offered by the diocese.

The diocese also reported that from the mid-1980s through 2017, it had paid an additional $1.6 million to 20 victims, bringing the totals to date to approximately $4.27 million paid to 43 victims of clerical sexual abuse of a minor.

The diocese said the payments were funded from a variety of sources: the diocese’s Pooled Self-Insurance Fund, in which parishes and affiliated agencies also participate; accumulated reserves; and payments from an insurance carrier.

The diocesan statement emphasized that no settlements were paid by donations to the annual Catholic Ministries Appeal.