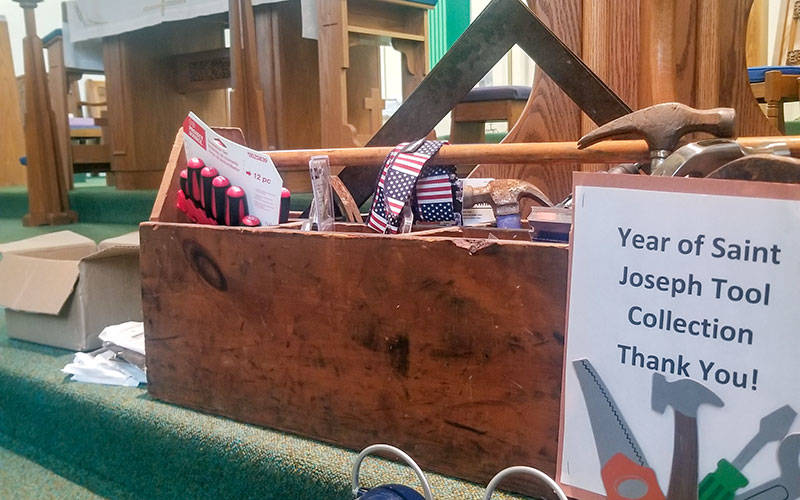 Donated tools are seen at St. Paul of the Cross Church in Honeoye Falls. (Courier photo by Mike Latona)

HONEOYE FALLS — The ongoing Year of St. Joseph has been marked in many parishes by prayer and educational activities, noting the saint’s special standing as Mary’s husband and Jesus’ earthly father.

Meanwhile, an initiative at a three-parish cluster in northern Livingston and southern Monroe counties highlights the saint’s daily life as a carpenter as a basis for helping people in need with their own carpentry endeavors.

A tool collection was launched on Father’s Day, June 20, at the parishes of St. Paul of the Cross, Honeoye Falls; St. Agnes, Avon; and St. Rose, Lima. Drop-off boxes for donations of new tools, as well as used ones in good working condition, have remained throughout the summer near entrances at all three churches. Ellen Hallahan, a project coordinator, said that the collection will conclude around the end of August, with tools to be forwarded to charitable organizations beginning in September for craftspeople who cannot afford to purchase those items on their own.

Contributions have come in steadily this summer from all three churches “which is really exciting, because with a cluster, you want everyone to participate,” Hallahan said. She added that the warm-weather months have been an ideal time for the project, because that’s when folks are most likely to be cleaning out their garages and basements.

Hallahan and fellow coordinators Lorraine Hoffman and Ann Brule noted that the collection has netted a large amount of hammers and power tools. Brule, who serves as the cluster’s secretary, added that she has occasionally come across overflowing collection areas when she goes to each of the three churches to pick up contributions. Along with tools, she has found such donated items as work gloves, lanterns and cooling neck scarves — “things I wouldn’t have even thought of,” she said.

The collection effort has grown to also include scrap wood. Hallahan explained that while researching organizations for receiving tools, organizers discovered a community need for wood that is used for learning woodworking, due to the price of wood having risen sharply during the coronavirus pandemic. Already, she said, members of two local Girl Scout troops and the cluster’s family faith-formation program plan to make bee houses out of some of the wood that’s been collected.

Other contributions from the initiative will be passed on to such agencies as Catholic Charities, Habitat for Humanity and St. Michael’s Woodshop. Additional organizations are invited to benefit from the effort: “We’re open to whatever,” Brule said. Any group in need of tools or wood can contact the cluster office at 585-226-2100 or astagnes@dor.org. Pickups of scrap wood, as well as tools not brought to the churches, also can be arranged through the office.

Hoffman observed that the project serves to not only assists people in need but help build community awareness “that not everybody has a nice home, and they don’t have the money to buy tools” to make necessary upgrades on those homes.

In addition, Hallahan said the initiative recalls the vital examples set by St. Joseph as a worker and family man — “to remind people that St. Joseph had a job, and he was an actual person who had to work and provide something for his family. And, for all we know, that he was teaching Jesus the tools of his trade to provide for himself, too.”

Recalling St. Joseph via the tool and wood collection carries special meaning for the Honeoye Falls/Avon/Lima cluster, Hallahan said. Due to the COVID-19 pandemic, the churches were unable to honor the saint in either 2020 or 2021 with their traditional St. Joseph’s Tables that normally take place near the feast day of St. Joseph on March 19. Hallahan noted that the cluster also plans to conduct a novena before the Year of St. Joseph officially ends this coming Dec. 8.