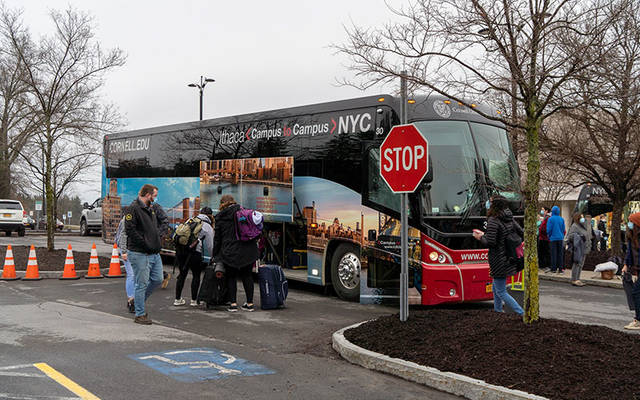 Inspired by the words of a priest from her childhood, a parishioner of Ithaca’s St. Catherine of Siena Church journeyed to New York City this spring with a team of medical professionals responding to the COVID-19 crisis.

“Our jobs as Christians is to comfort the afflicted and afflict the comfortable,” Michelle Arroyo, a nurse at Cayuga Medical Center, recalled the priest saying. “That stood out to me, and I thought maybe I need to push myself out of my comfort zone to go where I am needed and go where other people need help.”

On March 30, Gov. Andrew Cuomo issued a nationwide plea for doctors and nurses from around the country to help overwhelmed hospitals in the New York City area that were experiencing staffing shortages as the city became the epicenter of the national COVID-19 crisis.

Arroyo was one of 55 medical professionals from Cayuga Medical Center who formed a team sent to New York Presbyterian’s Weill Cornell Hospital in Manhattan April 8. Nurses, hospital aides and nursing students comprised the bulk of the team, she said, but it also included some doctors and nurse practitioners. Together, they spent a month helping to respond to an overwhelming number of COVID-19 cases.

“The virus is really real, and it takes everyone’s collaboration for us to get through this as best we can, so we all have to do our part,” Arroyo told the Catholic Courier June 16.

Two days into the mission, Arroyo sent an update to St. Catherine of Siena, asking for prayers for strength and stamina to sustain her team throughout its mission.

“It is amazing what the power of prayer can do, because right after that I began to feel much better about the whole experience and my ability to accomplish the mission,” Arroyo wrote in a subsequent reflection for St. Catherine’s June 7 bulletin.

Divided into a day and a night shift at the hospital, Arroyo’s team was lodged as the only guests at the Benjamin Hotel. To protect safety of hotel staff, medical team members and their patients at the hospital, the hotel took such precautions as limiting turn-down services unless requested and restricting use of the hotel gym to two people at a time, she said.

“We wore scrubs provided to us by the hospital, and every time you went in and out of a (hospital) room, there was a system to follow in order to change your gear,” Arroyo told the Courier. They also washed and sanitized their hands with every change, she said.

At the start or end of the workday, Ithaca team members would return to the hotel, shower and change before participating in an evening Zoom meeting from their respective rooms. These sessions gave team members an opportunity to review the day, vent if needed and learn from one another.

Consideration originally was given to the possibility of extending the trip, but Arroyo said that after evaluating the conditions a month later, the team returned home in May.

“Before this trip came about, you’d hear the news stories about basically this trauma that was happening in New York City, and it was kind of hard knowing that you did have skills you could use to help them when they were drowning, and it didn’t feel right to be home in this sort of comfortable position,” Arroyo said.

“I learned a lot from the experience that I would not have otherwise known,” she added, noting that should the opportunity present itself again, she would definitely participate in another mission.