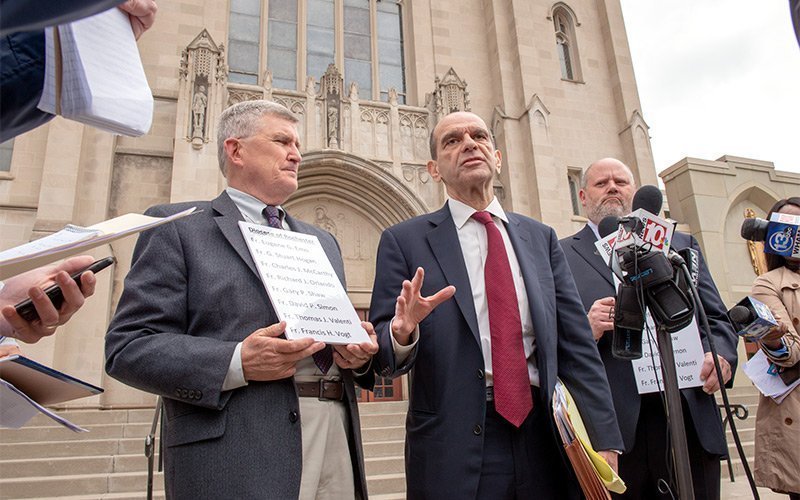 ROCHESTER — The Diocese of Rochester has issued a statement in response to a lawyer’s charges that eight current or former diocesan priests committed sexual abuse of minors.

During a press conference in front of Sacred Heart Cathedral June 6, attorney Mitchell Garabedian claimed that 17 of his clients had been sexually abused by Rochester priests. He said the alleged abuse took place between 1950 and 1978, and that the clients — 15 men and two women — were between the ages of 5 and 18 at the time of the alleged abuse. They are now between the ages of 52 and 77, he said.

Among those named by Garabedian were Eugene Emo, David Simon and Francis Vogt, who were publicly listed by the diocese in 2012 as having been removed from ministry for sexual abuse of a minor (see http://www.dor.org/index.cfm/safe-environment/dispositions-2002-present/).

In an interview with the Catholic Courier, Father Daniel J. Condon, diocesan chancellor, noted that Emo had been removed from ministry in 1996 and dismissed from the clerical state as a penalty in 2005.

The diocese withdrew faculties for public ministry of Vogt (who died in 2006) and Simon in May 2002, instructing them to live lives of prayer and penance, Father Condon said. These penalties were confirmed by the Holy See in 2005.

The attorney made allegations of child sexual abuse against three deceased priests — G. Stuart Hogan, who died in1985; Charles J. McCarthy, who died in 1971; and Richard J. Orlando, who died in 2006 — about whom the diocese said it never had received complaints of clergy sexual abuse of a minor.

Also named at the press conference was former priest Gary P. Shaw, who resigned from ministry in 1977 and was dispensed from the clerical state in 1978. The diocese said it never had received any complaints of clergy sexual abuse of a minor against Shaw.

The eighth man named by Garabedian was Father Thomas J. Valenti, currently the parochial administrator of Blessed Trinity/St. Patrick parishes in Tioga County. According to the diocesan statement, a single allegation against Father Valenti “was investigated, reviewed and determined to be unsubstantiated.” No further complaints of sexual abuse of a minor have ever been received against Father Valenti, the diocesan statement said.

When a television news reporter at the press conference asked Garabedian what proof exists for the charges he leveled, the attorney replied that he based his allegations on information from his clients and his own research.

The same reporter asked Garabedian if a recent TV-advertising campaign by his firm led the 17 clients to come forward, and the attorney acknowledged that the ads may have “in part” encouraged clients to contact him.

The diocesan statement said “the Diocese of Rochester has been in correspondence for several months with the Garabedian law firm regarding the individuals named publicly at the news conference today. The diocese has invited participation in a process of investigation and resolution. We have had little or no response.”

The attorney’s press conference occurred on the same day as a rally and press conference staged in Albany by advocates of the Child Victims Act, which would waive for one year the state’s civil statute of limitations on child sexual-abuse lawsuits against individuals and private institutions. The bill — which was originally included in the 2019 state budget but removed prior to the budget’s passing on March 31 — also would allow victims in future cases to sue individuals and private organizations for child sexual abuse until the alleged victims reached age 50 for civil cases and age 28 for felony criminal cases. Current state law allows victims until their 23rd birthday to file both civil and criminal cases.

The New York State Catholic Conference, which represents the bishops of the state’s seven Catholic dioceses as well as the Archdiocese of New York in matters of public policy, supports the Child Victims Act’s forward-looking extension of the statute of limitations so that future abusers can be brought to justice. But it opposes the one-year “look-back window” due to concerns that claims dating back several decades would be difficult or impossible to defend based on the passage of time.

The Catholic conference also argues against the look-back window because it would permit lawsuits regarding old cases to be brought only against private institutions.

According to an analysis (http://www.nyscatholic.org/wp-content/uploads/2018/06/2018-analysis-of-Susan-Read.pdf) by Susan Phillips Read, former associate judge of the New York State Court of Appeals, old cases against such entities as public schools would remain barred by state law requiring a plaintiff to file a notice of intent to sue a public entity within 90 days of an incident’s occurrence.

In its statement, the Rochester Diocese emphasized that it “treats all claims of abuse most seriously and has done so for decades, long before the United States Conference of Catholic Bishops issued the Charter for the Protection of Children and Young People in 2002.”

EDITOR’S NOTE: Victims of clergy sexual abuse of a minor are encouraged to contact civil authorities. To receive help and guidance from the Roman Catholic Diocese of Rochester, please contact Mrs. Deborah Housel, victim assistance coordinator, at (585) 328-3210, ext. 1555, or toll-free 1-800-388-7177, ext. 1555 or by e-mail to victimsassistance@dor.org.